Despite predictions that the oil and gas industry would consolidate in the wake of low commodity prices, merger and acquisition (M&A) activity during the first half of 2016 fell to levels not seen since 2008-09, according to a report by Deloitte Center for Energy Solutions. 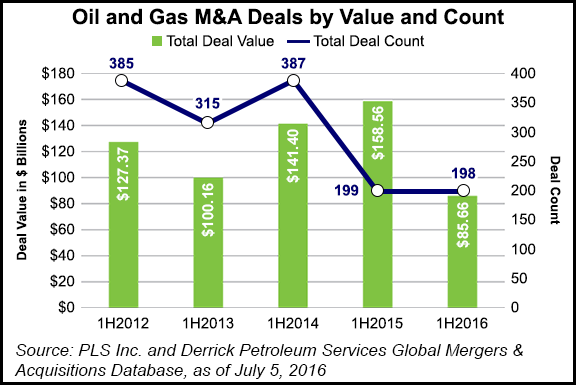 In a 20-page report, “Oil & Gas Mergers and Acquisitions Report — Midyear 2016: Looking for a Restart,” Deloitte analysts said disparate views of commodity prices between buyers and sellers have led to sparse M&A activity, but that sellers would be under increasing pressure so long as oil prices hover around or below $50/bbl.

Meanwhile, the oil and gas industry as a whole is facing the unprecedented challenge of acquiring capital, with traditional lenders balking at committing additional capital during a price downturn that has now lasted more than two years.

“Going into the second half of 2016, an increasing number of oil and gas companies and those that provide services to the industry are filing for bankruptcy,” the Deloitte analysts said. “Companies are also expected to take a harder look at their portfolios and consider or reconsider divesting of prized assets that will generate a competitive sales process. Price disparity that has hampered deal activity may also be unlocked as more companies are forced to re-evaluate cash flows.

“The timing of a revival in M&A activity will be influenced by the stability of commodity prices, openness of the debt markets, and global economic growth.”

According to Deloitte, the upstream sector saw a slight increase in the number of M&A deals between 1H2015 and 1H2016, but there was a substantial decline in total value when compared to the first half of the previous five years. Total deal values for 1H2015 were given a huge boost by the merger of Royal Dutch Shell plc and BG Group (see Daily GPI, Jan. 28).

Deloitte said 16 of the 56 upstream transactions that occurred in 1H2016 were for deals involving unconventional assets in the Permian Basin, followed by seven in the Marcellus Shale and five each in the Bakken Shale and the SCOOP (South Central Oklahoma Oil Province) and STACK (because of stacked pay zones) plays in Oklahoma. There were four deals each in the Eagle Ford and Niobrara shales, followed by two in the Haynesville Shale, and one each in the Barnett and Woodford shales.

Topping the list of upstream deals were Suncor Energy’s acquisition of assets from Canadian Oil Sands Ltd. for approximately $4.54 billion, and Range Resources Corp.’s acquisition of Memorial Resource Development LLC in an all-stock deal valued at $4.4 billion (see Shale Daily, May 16). The top 10 deals combined were valued at $20.81 billion.

Deloitte said that out of 136 announced deals in the upstream sector, analysts noted only three involved companies in bankruptcy. Considering that there were approximately 81 global bankruptcies in the oil and gas sector as of mid-2016 — and 77 of them are producers — the firm predicts more assets will become available over the next year.

In the OFS sector, there were only 21 transactions during 1H2016 with a total deal value of $16.8 billion. But that total would have been a lot lower without the $14.5 billion merger between France’s Technip SA and Houston-based FMC Technologies Inc. (see Daily GPI, May 19).

The FMC-Technip transaction was the largest across all sectors of the oil and gas industry in 1H2016, but it would have been dwarfed by the scuttled $28 billion merger of Baker Hughes Inc. and Halliburton Co. (see Daily GPI, May 2). The merger was opposed by the U.S. Department of Justice and the Federal Trade Commission.

Deloitte said the cancellation of the Baker-Halliburton merger is “significant as various divestitures were expected to occur as a result of the regulatory scrutiny that could have provided opportunities for other companies to acquire technology and to boost scale and service offerings. Clearly, regulators are playing a strong role in shaping pending transactions and influencing disposition activity to achieve regulatory approval.”

Meanwhile, the firm said the OFS sector “may be waiting out the downturn in oil prices,” and that during the interim these companies were “combining their operational expertise with technological advancements and an increase in international deal activity.”

Aside From TransCanada-CPG, Not Much Going on Midstream

According to Deloitte, the second-largest deal in 1H2016 was TransCanada Corp.’s acquisition of Columbia Pipeline Group Inc. (CPG) for $13 billion (see Daily GPI, June 22). That transaction accounted for 61% of the value of deals conducted in the midstream sector 1H2016; without it, the period would have had the lowest total value for midstream deals for the last five years.

There were only two corporate transactions in the midstream sector in 1H2016: the TransCanada-CPG merger and SemGroup Corp.’s repurchase of its former master limited partnership (MLP), Rose Rock Midstream LP, in an all-stock deal valued at $391 million (see Shale Daily, June 1). Deloitte said the other 20 deals in the sector were asset purchases or acquisitions of ownership interest in midstream companies.

Although the midstream sector has seen a large number of transactions involving MLPs in recent years, Deloitte said the MLP model is finding fewer opportunities for growth, due in large part to a decline in drilling activity and the high risk of customers either seeking to renegotiate their contracts or defaulting on them entirely. Consequently, MLP activity has slowed in 1H2016.

Deloitte also said midstream companies should be alarmed by a ruling last March in U.S. Bankruptcy Court for the Southern District of New York, where a judge allowed Sabine Oil & Gas Corp. to terminate three natural gas and condensate gathering agreements (see Daily GPI, March 8). That ruling “raised the level of uncertainty about the stability of similar contractual arrangements, giving midstream participants a reason to be more cautious about purchasing assets or corporate entities.

“MLPs will need to be more creative in their operating and investing strategies in order to attract new capital,” Deloitte said.

M&A activity was even slower in the downstream sector in 1H2016, recording fewer deals and lower deal value than in the two previous years. Deloitte said there nine corporate transactions totaling more than $1.8 billion and 10 asset sales totaling more than $4.1 billion.

The largest deal in the downstream sector was Alimentation Couche-Tard Inc.’s purchase of Imperial Oil Ltd.’s retail gas stations in Canada for $2.1 billion. That deal accounted for 35% of total deal value for the sector in 1H2016.

Deloitte said the slow pace of M&A activity in the sector “seems to be a result of a combination of a relative scarcity of attractive assets coming on to the market, as well as a function of price uncertainty. However, there are emerging signs that some of the integrated majors are now considering divestments of strategically non-core refining assets while valuations are still relatively attractive.”

According to Deloitte, the M&A activity it examined is based on data from PLS Inc. and Derrick Petroleum Services Global Mergers & Acquisitions Database as of June 30. The data represents acquisitions, mergers and swaps with deal values greater than $10 million, including transactions with no disclosures on reserves and/or production.