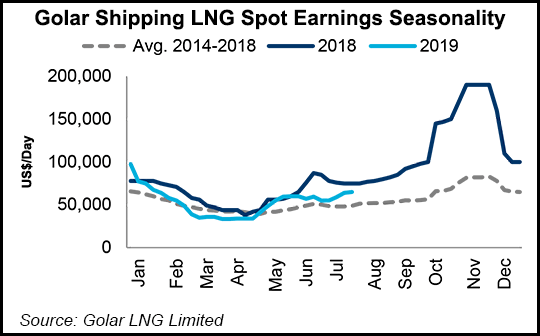 Bermuda-based Golar, considered an FLNG technology expert, entered into a joint development agreement for Delfin LNG in 2017, at the time providing momentum for the GOM project, which was slated for a financial investment decision (FID) in 2018. It was initially to be in operation by 2021.

But Golar’s management revealed during a 2Q2019 earnings announcement Thursday that the company has “decided against jointly developing the FLNG vessel for the U.S. Gulf Coast Delfin LNG project.”

Asked about the decision during a conference call with analysts and investors, Golar CEO Iain Ross said Delfin LNG falls short of the company’s criteria for moving forward with a project.

He pointed to the need for “high caliber customers that can reliably provide feed gas and put together an offtake that underpins the financing of the project, combined with co-investors to lift the project with us.

“…It’s important for us to put our investment opportunities and resources into projects that have the greatest chance to get to FID,” Ross added.

Back in 2017, Delfin management had hoped the FLNG export project would “lead the second wave” of U.S. LNG exports, but the seas have gotten choppier for second-wave developers since then, even as the global LNG market is expected to tighten in the coming years.

A global LNG glut in 2019 driven by recent capacity expansions has put downward pressure on prices, and the trade war between Washington, DC, and Beijing has created a barrier for U.S. projects hoping to secure agreements with Chinese offtakers. According to the International Gas Union, China accounted for 16.7% of LNG imports in 2018 and grew its imports by 15.8 mmty last year, by far the largest incremental increase among global LNG importers.

Golar management described a “difficult quarter” for its LNG shipping business driven in part by price weakness in Europe and Asia, but the fourth quarter should see spot rates increase due to “seasonal tightening” in the market.

“We have confidence” that considering “the number of ships needed to raise and move the cargoes that have come on and are due to come on, there’s a shortage,” Ross said. “And we think for the next couple of years that will play out, and we are seeing evidence…that that’s holding true.”

The weakness in the market presents a challenge for large onshore U.S. LNG developers, but there are two important factors to consider, according to Ross.

“None of the major customers that we’re dealing with…would be relying on today’s immediate spot gas price to launch a 20-year project,” he said. “They’re taking a long-term view on gas prices and the amount of demand that’s going to come into the market.”

Secondly, the prospect of fuel switching in the transportation sector presents significant upside for long-term demand for LNG.

“The switching of coal, heavy fuel oil, marine diesel and diesel for transportation to LNG…to gas, will create demand way in excess of the current wave of demand, which is being driven primarily by, basically, the Chinese switch from coal-fired power stations to gas-fired power stations,” Ross said. “So we believe that when that transportation light switch, in addition to the power switch, starts to come through, the demand rate will accelerate and therefore more LNG will be needed.

“So you may have a short-term fluctuation with low gas prices, but medium- to long-term we still see the pricing will get into balance with the demand that it has to satisfy.”

Golar, which has been in negotiations to provide FLNG exports for the Noble Energy Inc.-operated Leviathan project offshore Israel, reported revenues for the quarter of $96.745 million, versus $59.374 million in the year-ago quarter.