The Delaware River Basin Commission (DRBC) voted 3-1, with one abstention, on Wednesday to adopt a resolution calling for a rulemaking that could ultimately lead to a ban on hydraulic fracturing (fracking) and related natural gas development activities. 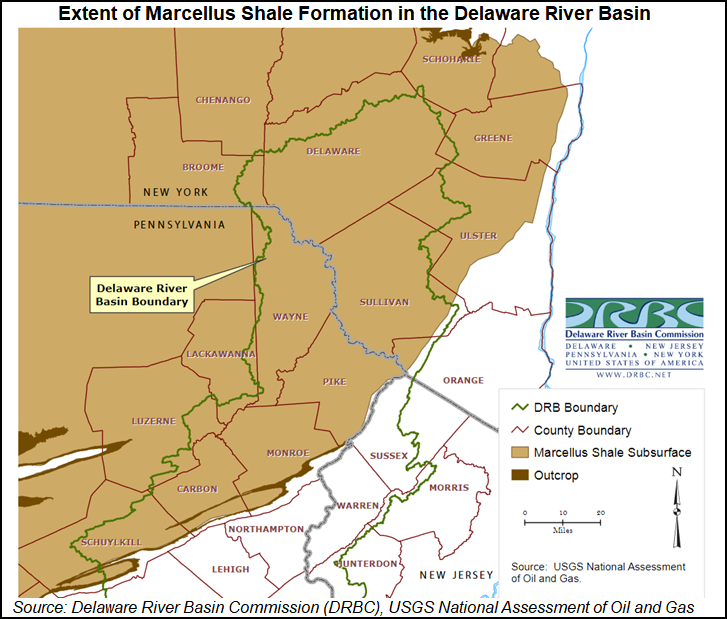 Following the vote, the DRBC emphasized that commissioners did not adopt any draft regulations governing natural gas development.

The oil and gas industry voiced displeasure with the resolution, but an environmental group that has been leading the charge for an outright ban on fracking said it was also disappointed, calling it “a step backward.” While it could potentially lead to a fracking ban in parts of the river basin, the Delaware Riverkeeper Network (DRN) argued the resolution could also open the watershed to wastewater disposal from fracking, as well as allow for water withdrawal of water to support drilling operations elsewhere.

The DRBC is led by the governors of the four basin states — Delaware, Pennsylvania, New Jersey and New York — and the federal government, represented by the commander of the U.S. Army Corps of Engineers’ North Atlantic division.

Representatives for Democratic Govs. John Carney of Delaware, Tom Wolf of Pennsylvania and Andrew Cuomo of New York voted for the resolution, while the Army Corps voted no and a representative for New Jersey’s Republican Gov. Chris Christie abstained.

“Today, we are acting to protect a watershed that supplies drinking water to more than 15 million people in one of the most densely populated areas of the country,” Wolf said Wednesday. “I believe this resolution preserves water quality and water supply for the residents of the watershed, and will protect this precious resource for generations to come.

“I have supported this resolution since I was a candidate for governor of Pennsylvania, and I am proud that we have worked collaboratively to move this process forward after almost a decade of work at the DRBC.”

Wolf’s office said the resolution calls for “promulgating regulations that would prohibit any water project in the Delaware River Basin proposed for developing oil and gas resources by high-volume hydraulic fracturing.”

The DRBC said in 2009 all gas drilling in the basin needed to be reviewed but said it would not approve any development until rules were adopted governing the industry. The agency postponed the gas development review in 2010 and failed to act on adopting new rules in 2011, leaving in place the de facto moratorium.

‘Defies Both Common Sense And Logic’

In a joint letter Tuesday, the Marcellus Shale Coalition (MSC) and the Pennsylvania Chamber of Business and Industry (PCBI) urged Wolf to reject the DRBC’s resolution. The organizations said the de facto moratorium has caused the commonwealth to miss out on billions in private capital investment, while mineral rights owners have lost hundreds of millions in lease and royalty payments.

“Given the comprehensive regulatory scheme already in place in Pennsylvania, and the scientific analysis borne of over a decade of natural gas development within the commonwealth, it defies both common sense and logic for the DRBC to conclude that natural gas development cannot be done safely within its watershed when Pennsylvania has a proven track record of doing exactly that,” wrote MSC President David Spigelmyer and PCBI CEO Gene Barr.

“Prohibiting the development and enjoyment of one’s property rights based solely on which watershed a citizen may live or own property in is arbitrary, and sends a chilling message — far beyond the reaches of just the natural gas sector — to those who may be contemplating investing capital and creating jobs in the commonwealth.”

The Associated Petroleum Industries of Pennsylvania (API-PA), a division of the American Petroleum Institute (API), derided the DRBC’s proposal as “bad public policy” that would lead to higher energy costs.

“Common sense regulations must strike an appropriate balance between deferring to state jurisdictions and ensuring protection of the Delaware River Basin and its communities,” said API-PA Executive Director Stephanie Catarino Wissman. “We oppose the DRBC’s proposal to adopt regulations that are duplicative and contradict existing state regulations in surrounding states and Pennsylvania, where state officials and communities have worked hard to create a robust regulatory regime that ensures the environment, public health and local communities are well-protected.

“Interfering with Pennsylvania’s effective, comprehensive program undermines a crucial source of income for both the state economy and individual families. API plans to continue its active participation in the ongoing public discussion over any proposed regulations governing the development of energy development in the Delaware River Basin.”

The DRN and other conservation groups were also unhappy with the resolution. DNR’s Maya van Rossum said she thinks there was a quid pro quo at work behind its passage.

“There seems to have been this trade-off negotiated,” van Rossum told NGI’s Shale Dailyon Wednesday. “From what we understand, there would be consideration of a ban [on fracking] in portions of the watershed, but the trade-off is then to allow the disposal of frack waste and out-of-basin transfers of fresh, clean water volumes from our watershed…to support drilling and fracking operations in other watersheds, resulting in more frack wastewater that might come to the Delaware River watershed…

Last March, the DRBC said it had no plans to lift the moratorium on natural gas drilling within the 13,539-square mile watershed. Also in March, the U.S. District Court for the Middle District of Pennsylvania dismissed a lawsuit filed by a small exploration and production company that challenged the authority of the DRBC to review and approve gas drilling in the watershed.