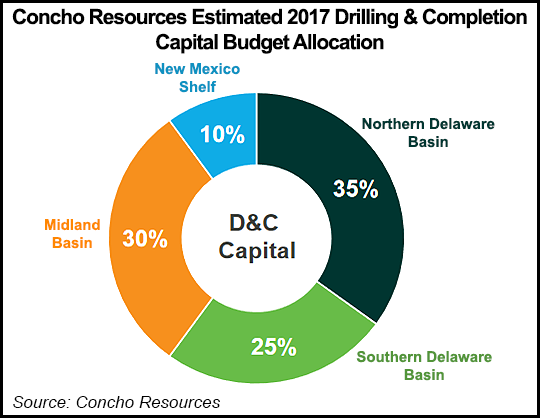 “As a result of drilling efficiencies, completion optimization and portfolio high-grading, we are raising our 2016 production growth target to 5%…While we have significant momentum heading into 2017, continued commodity price volatility reinforces our commitment to managing capital spending within anticipated cash flows,” said CEO Tim Leach.

“We expect to execute a $1.4 billion to $1.6 billion capital program during 2017 and deliver production growth of 17% to 20% over a more robust 2016 production outlook. Further, we are uniquely positioned to generate 20% annualized production growth over the next three years within cash flows due to the quality of our portfolio, demonstrated financial discipline and operational excellence.”

Production during the third quarter was 14.1 million boe, or 152,900 boe/d, an increase of 6% from the second quarter and above the high end of the company guidance. Average crude oil production totaled 91,100 b/d, and average natural gas production totaled 370.6 MMcf/d.

Two factors contributed to the production mix for the third quarter. Natural gas processing capacity in the Delaware sub-basin has significantly expanded, with more than 1 Bcf/d of capacity online since the beginning of 2016. The timing of completion activity and bringing new wells online also contributed to the production mix for the quarter. Concho said it expects to complete 60-70 gross wells during the fourth quarter compared to 46 gross completions in the third quarter.

“The resource potential on the northern Delaware basin is abundant, and with more than 350,000 gross acres, we have significant leverage to the stacked resource,” Leach said during a conference call on Wednesday. “Since 2015, we’ve completed more than 225 horizontal wells, targeting nine different zones. Our activity over the past two years represents only a third of the horizontal wells we’ve drilled in the northern Delaware since 2011.”

The company refers to its acreage in southern Lea County, NM, as the Red Hills area, where Concho is targeting the oil-prone Avalon, Bone Spring and Wolfcamp formations. A four-well, 80-acre spacing test, the Monet, has achieved cumulative production of more than 690,000 boe (67% oil) over the first 145 days of production. Concho also recently conducted a two-well test targeting the Upper Wolfcamp Sands in Red Hills. The wells, the Viking Helmet State 002H and the Stove Pipe Federal 002H, were drilled to an average lateral length of 6,826 feet and produced at an average peak 30-day rate of 2,385 boe/d (84% oil). The company plans to continue developing the Upper Wolfcamp Sands with an emphasis on optimizing lateral placement and development spacing.

In the southern Delaware, Concho added five horizontal wells with at least 30 days of production as of the end of the third quarter. The average peak 30-day and 24-hour rates for these wells were 1,505 boe/d (73% oil) and 1,751 boe/d, respectively. The average lateral length was 7,474 feet. The company has four horizontal rigs in the southern Delaware.

Building on success from an initial third Bone Spring test completed in the second quarter, Concho added two third Bone Spring horizontal wells during the third quarter. These were drilled to an average lateral length of 4,875 feet and produced at an average peak 30-day rate of 1,909 boe/d (64% oil).

Concho added two horizontal wells in the Midland sub-basin with at least 30 days of production as of the end of the third quarter. The average peak 30-day and 24-hour rates were 1,070 boe/d (85% oil) and 1,420 boe/d, respectively. The average lateral length was 10,332 feet. The company has eight horizontal rigs in the Midland.

The company recently completed an eight-well stacked density pilot, with four wells targeting the Lower Spraberry and four wells targeting the Wolfcamp B. Wells in each zone were spaced at 80 acres and drilled to an average lateral length of 9,513 feet. Cumulative production from the density pilot totaled about 260,000 boe (85% oil) over the first 30 days of production.

For the fourth quarter, Concho expects production to average between 164,000 and 167,000 boe/d. The company raised its full-year 2016 production growth target to 5%. Concho expects its total capital spending for 2016 to be $1.3 billion, within the guidance range of $1.1 billion to $1.3 billion and funded entirely within after-tax cash flow inclusive of settlements from derivatives. The capital plan excludes acquisitions, but includes about $30 million of drilling and completion capital attributable to recently acquired assets in the Midland sub-basin.

For 2017, the board approved a capital budget of $1.6 billion. Concho said it expects to grow oil volumes by more than 20% year-over-year and total company production growth of 17-20%. Approximately 90% of capital would be directed to drilling and completion activity.

Concho’s average realized price for oil and natural gas for the third quarter, excluding the effect of commodity derivatives, was $30.61/boe, compared with $33.74/boe for the third quarter of 2015. For 2017, Concho has crude oil swap contracts covering about 67,200 boe/d at a weighted average price of $54.60/bbl.