Despite the commodity price downturn, the Permian Basin, and particularly the Delaware sub-basin, have remained attractive to producers, supporting the need for additional natural gas processing in the region. 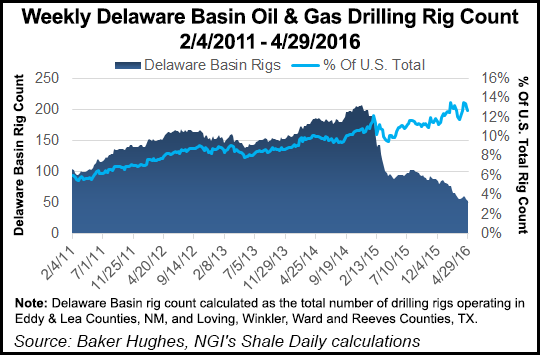 On Tuesday it was announced that two Delaware Basin facilities had entered service.

Prior to start-up, much of the natural gas being processed at the plant was flared, shut-in, or blended into a residue pipeline with no NGL upgrade, Enterprise said.

“The South Eddy Plant is a key component of our overall strategy to double Enterprise’s natural gas processing capacity in the Delaware Basin during 2016,” said Jim Teague, CEO of Enterprise’s general partner. “A second cryogenic processing facility we are developing as part of our joint venture at Waha is scheduled to begin service in the third quarter of 2016 and will add another 150 MMcf/d of incremental capacity.”

The Toyah I plant is served by 120 miles of gathering pipeline and four field compressor stations.

EagleClaw expects to establish an additional connection with Oneok’s WestTex Transmission system, which connects with the Roadrunner Gas Transmission Pipeline. Phase One of Roadrunner is complete and currently serving markets in El Paso, Texas, and Mexico.

EagleClaw also said it has purchased a second cryogenic processing plant with capacity to process 200 MMcf/d. It said it expects to install the Toyah II plant at the same location as customer demand increases.

“Our goal is to stay a step ahead of our customers’ processing needs and provide the optionality they need to move hydrocarbons to the best possible markets,” said EagleClaw CEO Bob Milam.