Proved reserves of natural gas in the United States decreased 64.5 Tcf in 2015, a 16.6% decline from 2014’s historic high, and U.S. crude oil and lease condensate proved reserves declined 4.7 billion bbl (11.8%) compared with the previous year, both impacted by lower prices, according to the Energy Information Administration (EIA). 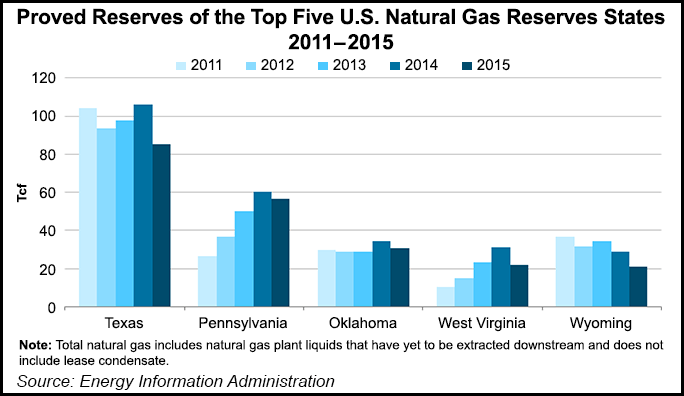 Proved reserves of natural gas in the United States finished 2015 at 324.3 Tcf and crude oil and lease condensate reserves were 35.2 billion bbl, EIA said in a report released Wednesday. EIA defines proved reserves as volumes that geological and engineering data “demonstrate with reasonable certainty to be recoverable in future years from known reservoirs under existing economic and operating conditions.”

Proved reserves of U.S. natural gas set record highs in 2013 and 2014, and U.S. crude oil reserves rose for six consecutive years prior to 2015.

“The significant reduction in the average price of both oil and natural gas between 2014 and 2015 resulted in more challenging economic and operating conditions, an important factor in determining proved reserves,” EIA said. “These price developments, reflected in a nearly 50% decline in average West Texas Intermediate crude oil spot prices (from $95/bbl in 2014 to $50/bbl in 2015) and a more than 40% decline in the natural gas spot price at the Louisiana Henry Hub (from $4.55/MMBtu in 2014 to $2.62/MMBtu in 2015) led to reduced drilling activity and downward revisions in proved reserves across a broad range of U.S. producers in 2015.”

Even as proved reserves estimates stumbled, U.S. natural gas production in 2015 increased for the 10th consecutive year, rising 4% compared with 2014.

“Generally, when oil or natural gas prices fall or operating costs rise, the life of a producing well may be shortened by reducing the remaining proved reserves that are economically recoverable, and may cancel or postpone planned offset wells,” EIA said. “This may reduce the estimate of proved reserves, even if production is increasing (usually because of a large number of new wells drilled and completed prior to the price drop/cost increase). Changes in annual production can therefore lag behind the year in which changes in proved reserves are reported.”

With sustained low prices continuing through most of this year, the agency said downward reserves revisions are likely to appear again in its year-end report for 2016, though probably not to the same degree as in the 2015 report.

Proved gas reserves decreased in each of the top five U.S. gas reserves states in 2015. Texas had the largest net decrease at 20.6 Tcf. Pennsylvania and Oklahoma had large net downward revisions that were partially offset by developments in the Marcellus and Woodford shales, reducing their declines to 3.9 Tcf and 3.6 Tcf, respectively.

Ohio added more than 5 Tcf of gas proved reserves in 2015 in the Utica/Point Pleasant Shale play, surpassing Arkansas and the Gulf of Mexico to become the ninth-largest gas reserves state.

New Mexico had the largest net increase of all states in proved reserves of crude oil and lease condensate of all states in 2015, mostly from development of the Wolfcamp Shale and Bone Spring plays in the Permian Basin. Crude oil and lease condensate extensions to existing fields were highest in Texas and North Dakota, but, as a result of downward revisions, both states experienced a net reduction in proved reserves.