A leaner and more cost competitive industry in the deepwater has emerged as the energy industry gets back to work, with the most compelling projects worldwide closer to competing with U.S. tight oil plays, according to Wood Mackenzie. 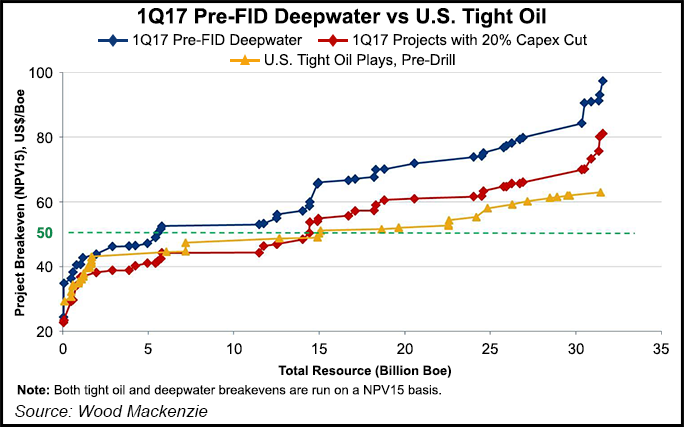 Separately, an analysis by Sanford C. Bernstein Co. LLC tallied 152 offshore projects now under appraisal around the world, 30% more than a year ago.

More deepwater projects should be sanctioned this year, with three massive ones recently getting a green light. In the Gulf of Mexico (GOM), BP plc in December issued a final investment decision (FID) for the $9 billion Mad Dog Phase 2 project 190 miles south of New Orleans. Kaikias, about 130 miles offshore Louisiana in Mississippi Canyon, was sanctioned by Royal Dutch Shell plc in February. An FID on Leviathan, a natural-gas rich project offshore Israel, was issued in late February by Noble Energy Inc.

“We are at last beginning to see the first signs of recovery in deepwater, driven primarily by cost reduction and portfolio high-grading,” said Wood Mackenzie’s Angus Rodger, Asia-Pacific upstream research director. “Projects in the U.S. Gulf of Mexico in particular have made significant strides, with many reducing NPV15 [net present value over 15 years] from above $70/boe to below $50/boe.

“This is not just a result of cheaper rig day rates. Of far greater impact are the steps the industry in the Gulf of Mexico and elsewhere have taken to reevaluate project designs and improve well performance. We are now seeing scaled-down projects emerge with less wells, more subsea tie-backs, and reduced facilities and capacities — and this all translates into lower breakevens.”

For instance, Mad Dog’s costs actually have fallen by 60% since the project first was unveiled, BP said in February.

On average, deepwater global project costs have fallen by more than 20% since 2014, according to Wood Mackenzie. Assuming a 15% internal rate of return hurdle (NPV15), 5 billion boe of pre-sanctioned deepwater reserves now breakeven at $50/boe or lower.

By comparison, 15 billion bbl of tight oil resource in undrilled wells have breakevens of $50/boe or lower at a 15% hurdle rate in Wood Mackenzie’s dataset.

“However, the playing field between tight oil and deepwater is about to get a lot more level,” Wood Mackenzie researchers said. “There is still considerable scope to drive deepwater breakevens lower through leaner development principles and improved well designs, but in tight oil cost inflation is back with a vengeance.”

Another 20% reduction in current deepwater costs could yield 15 billion boe of pre-FID reserves into contention, which would be on par with tight oil.

“The deepwater value proposition will strengthen as tight oil cost inflation returns,” said researchers. “A 20% rise in tight oil costs would mean that the two resource themes effectively have the same opportunity set measured by volume in the money at $60/boe.”

The oil price crunch has changed the deepwater industry’s structure, which today is not only leaner but smaller. According to Wood Mackenzie, more than 70% of the estimated 45 pre-FID projects expected to be sanctioned over the next few years are operated by only eight companies, Brazil’s Petrobras and seven oil majors — ExxonMobil Corp., Chevron Corp., Shell, BP, Total SA, Eni SpA and Statoil ASA.

Many independents have exited the deepwater sector “because of either cost pressure or a reallocation of capital to tight oil plays,” Wood Mackenzie said. “In a capital-constrained world, fewer operators inevitably means less deepwater projects flowing through to sanction. Only the most cost-competitive projects and regions will attract new investment.”

“Taking only two years ahead, the comparable dataset from last years’ Long List was 90 projects,” said Bernstein’s Nicholas J. Green. “Simplistically therefore, we can say the offshore is looking 29% more optimistic than a year ago.”

“This can be interpreted two ways: that oil companies are focusing their efforts on newer discoveries; and that old discoveries are (relatively speaking) less economic under the current the oil price environment and level of cost-cutting to date,” Green said.

Top projects, considered “big beasts” account for about half of the reserves, led by three East Africa gas projects. Others include Brazil’s Jupiter and Libra projects, Nigeria’s Bonga SouthWest and four others.

“Together the big beasts are 80% weighted to gas, cover a third of potential production, and are more than twice as deep (1,406 meters) as the average project,” said Green.

Brazil remains the “best” offshore basin, with 20 deepwater projects averaging 102,000 boe/d in size. The deepwater GOM “looks in poor health: only nine projects and about 6% share of the global mix,” he said. The GOM going forward will be a “litmus test for deepwater economics.”

As to which projects may see FIDs this year, they likely will be small, Green said.

“It can be a fool’s errand to identify which of the Long List will be approved; public data simply isn’t sufficient. Perhaps more usefully, we can say our forecast of 25 FIDs in 2017 is a 40% conversion of the 65 in the List. There is likely to be a skew toward small tiebacks and extensions, perhaps making up to 80% of FIDs. And gas developments will continue to dominate.”

Evercore ISI’s James C. West and his team took a look at the offshore market from the equipment side. Things are moving in a positive direction, he said.

“Including all future contracts, the global jackup rig count increased for the first time this month in almost 2.5 years, to 257.5 units or 8.6% above our base case estimate from a year ago,” he said Tuesday. “Industry demand held up much better than we anticipated and appears to have bottomed in February, down 36.8% from the April 2014 peak…

“There are 21 jackups that will start work on new contracts in the next few months, down from 24 a month ago but still a positive indicator that activity may trend higher in the near term.”

Evercore’s base case estimate assumes the rig count increases gradually over the next couple of months and ends the year up 6% from current levels, driven by improvements overseas. The jackup rig count is expected to increase another 12% in 2018 from higher activity overseas and in Mexico, while activity flattens in 2019.