One of the hallmarks of the liquid natural gas spot markets in the United States and Canada — access to natural gas storage facilities — help match supply during periods with greater than normal demand. Mexico has made tremendous strides in opening its natural gas grid to third party trading activity in recent months, but the country still has a long way to go to rival the storage availability north of its border. 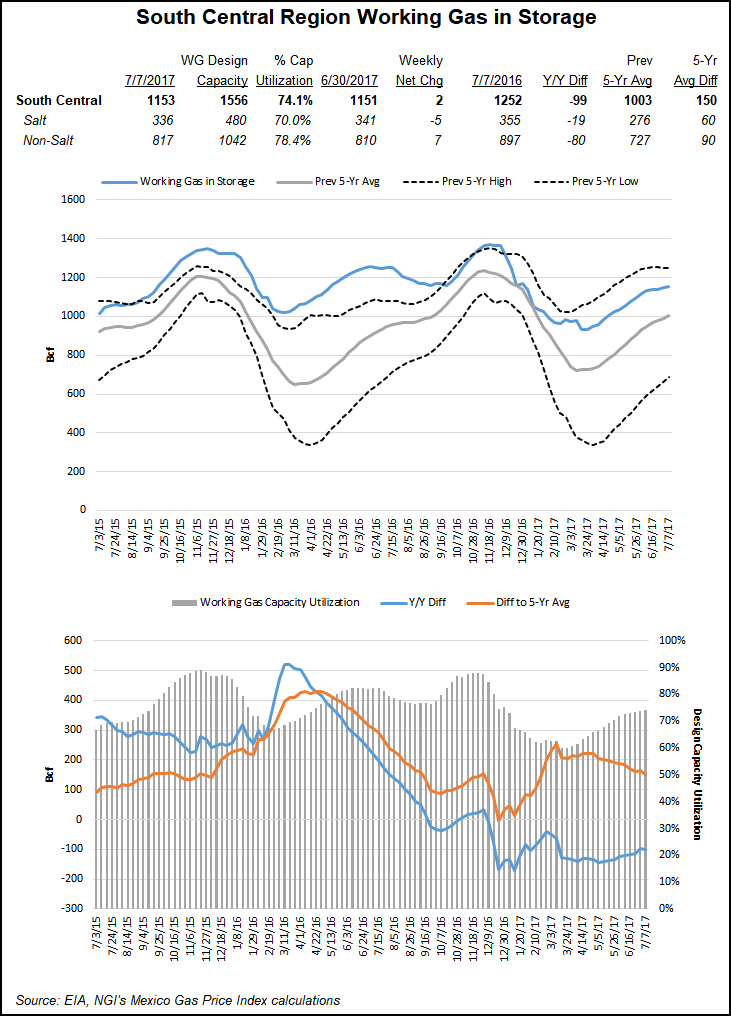 To wit: Mexico currently has little to no natural gas storage, and several speakers at the Third Mexico Gas Summit in San Antonio in May indicated this is a pressing need, so much so that the Secretaria de Energia de Mexico (Sener) is expected to develop a policy on natural gas storage by the end of this year. Private companies are expected to take the lead in developing Mexico storage facilities in the months ahead.

What storage Mexico does have comes in the form of liquefied natural gas (LNG) import facilities, primarily the 500 MMcf/d Manzanillo import facility on the west coast that connects to Mexico’s Integrated Natural Gas Transport and Storage System (Sistrangas) via TransCanada Corp.’s Guadalajara Pipeline, and the 500 MMcf/d Altamira facility in southern Tamaulipas along the Gulf of Mexico.

In addition, Mexico can tap into storage gas in the United States, mainly from the Gulf Coast region, and although Mexican entities do not typically hold capacity in these facilities, they may access U.S. storage gas via producers and marketing companies.

Each Thursday, NGI will publish a chart that shows the amount of working gas in storage in the South Central region of the United States, following the release of those data from the U.S. Energy Information Administration. The South Central region includes Alabama, Arkansas, Kansas, Louisiana, Mississippi, Oklahoma and Texas, but more than 50% of the total South Central working storage gas capacity is in Texas and Louisiana. Oklahoma accounts for another 13%, and there are several planned pipelines to move gas from Oklahoma into the Texas region.

For the week ended July 7, total working gas in the South Central region stood at 1,153 Bcf, down 99 Bcf from the same time one year ago, but 150 Bcf higher than the average 1,003 Bcf in storage for the same day between 2012-2016. At 1,153 Bcf, working gas stands at an estimated 74.1% of capacity, down from an estimated capacity utilization figure of 82.4% a year ago, according to NGI calculations.

Texas is a key driver behind total South Central underground storage capacity, and it is the main exporting state to Mexico. In April, 84% of the total 3.9 Bcf/d of gross U.S. natural gas pipeline exports to Mexico came through Texas, with the remaining 8% from Arizona and 7% via California. The United States also shipped 458 MMcf/d to Mexico via the Sabine Pass LNG export facility in Louisiana in April.

That 84% figure is likely to grow even higher.

Exports into Mexico from three recently placed into service West Texas intrastate pipelines have been slow to ramp up, but should get a boost in the months ahead as facilities are completed within Mexico.