Natural gas production from seven key U.S. regions is set to fall by 316 MMcf/d from March to April, extending a downward trajectory in projected output from the domestic plays that goes back to early last year, according to new data published Monday by the U.S. Energy Information Administration (EIA). 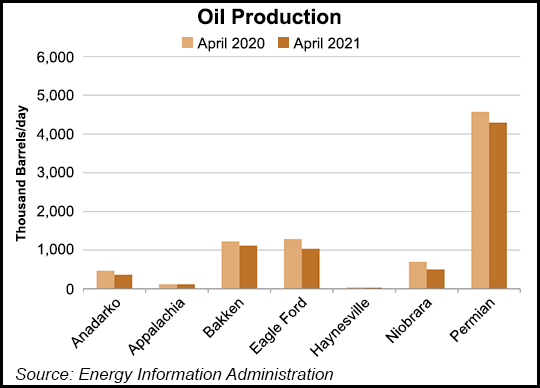 Combined output from the Anadarko, Appalachian and Permian basins, as well as from the Bakken, Eagle Ford, Haynesville and Niobrara formations, is set to fall from around 82.9 Bcf/d in March to slightly under 82.6 Bcf/d in April, EIA said in its latest Drilling Productivity Report (DPR).

Bucking the trend, the Haynesville is expected to grow output by 119 MMcf/d from March to April, with natural gas output from the Permian set to grow 21 MMcf/d month/month, agency estimates show.

The backlog of drilled but uncompleted wells (DUC) declined by 102 across the seven regions from January to February, the latest DPR data show. The Niobrara drew down its DUC backlog by 30 wells, while the Bakken and Eagle Ford each depleted 22 DUCs month/month. Appalachia saw a decline of 14 in its DUC count, while the Anadarko count declined by 13.

The Haynesville DUC total increased by one to 314 as of February, while the Permian saw a small decline of two DUCs, lowering its backlog to 3,273, according to EIA estimates.