U.S. stockpiles of crude are down substantially this year amid rising demand and curtailed production, with inventories at the Cushing Hub in Oklahoma driving the downward trend. 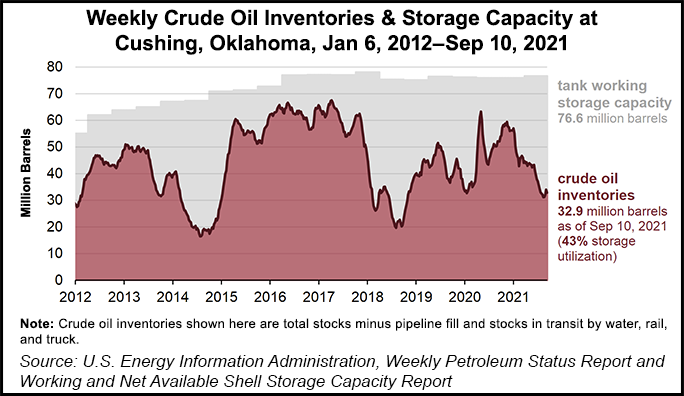 Stocks at Cushing totaled 32.9 million bbl for the week ended Sept. 10, down 42% from the start of the year, the U.S. Energy Information Administration (EIA) said in a research note Tuesday. Oil stocks at Cushing were 26% lower than the previous five-year average, the agency said.

For the United States overall, oil inventories last week, excluding those in the Strategic Petroleum Reserve, decreased by 6.4 million bbl from the previous week. At 417.4 million bbl, total domestic inventories were about 7% below the five-year average, EIA said.

The hub at Cushing is key because it is the delivery point for the West Texas Intermediate (WTI) crude futures contract. WTI prices topped $70/bbl in intraday trading Tuesday; the U.S. benchmark is up about 35% in 2021.

EIA noted that Cushing is home to 14% of domestic commercial tank and underground oil storage capacity. Cushing had a storage capacity utilization of 43%, the agency said, the lowest point since 2018.

The agency said the decline at Cushing coincides with a rebound in domestic and global oil demand this year, following a steep bout of demand destruction amid the coronavirus pandemic in 2020.

The WTI contract traded into negative territory in April 2020 amid fallout from virus outbreaks, but oil markets have rebounded sharply in recent months.

Demand has escalated through much of the spring and summer this year following vaccine rollouts. The United States and other major economies have adapted to the pandemic despite the Delta variant of the virus, and travel has bounced back, driving consumption of fuels derived from oil.

U.S. oil production, meanwhile, has only inched ahead.

For the Sept. 10 EIA report period, production stood at 10.1 million b/d, up a tick from 10.0 million b/d the week before, according to the agency’s Weekly Petroleum Status Report. Output had plummeted in the week ended Sept. 3, dropping from 11.5 million b/d prior to Hurricane Ida. The storm initially knocked offline more than three-fourths of oil output in the Gulf of Mexico (GOM).

Prior to Ida, however, output was still more than 1.0 million b/d below the 2020 peak reached last March before the pandemic. Producers this year have held with vows to stick with virus-imposed conservative stances on output, despite the price recovery.

Demand, meanwhile, was also down last week because of Ida’s fallout. It declined 0.2% week/week and held near the low levels of the Sept. 3 week, when demand dropped 13% due to flooding and cold winds in Ida’s wake. Outside of the GOM, however, demand has generally held strong.

Total products supplied – EIA’s terminology for demand – increased notably over the last four-week period and averaged 21.1 million b/d. That was up by 17% from the same period last year. This included strong gains in demand for motor gasoline, distillate fuels and jet fuels. The result: Declining oil stocks, EIA said. According to its latest Petroleum Supply Monthly, the national decline of 35 million bbl in June was the largest drop in U.S. crude stocks since the agency began reporting data in 1981.