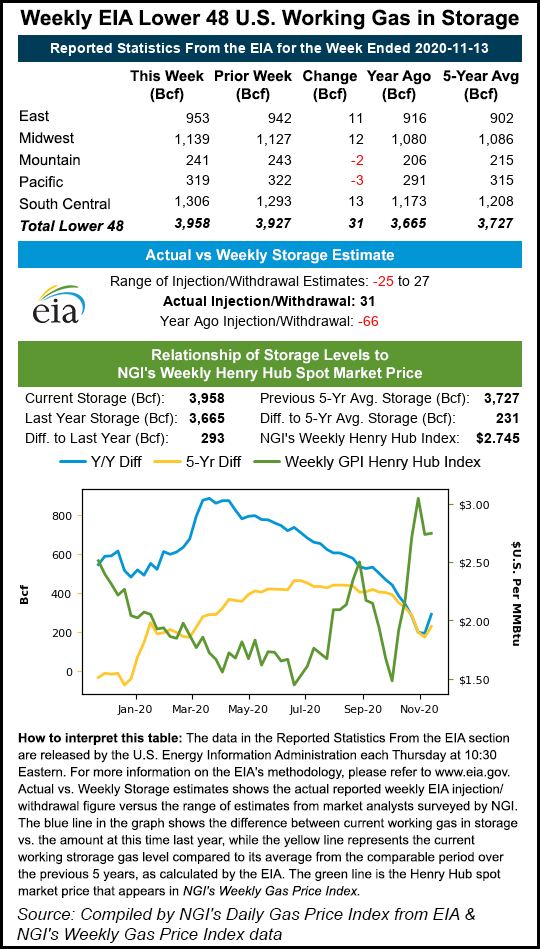 “It was warmer than normal over the eastern two thirds” of the Lower 48 during the report period, NatGasWeather said. The forecaster’s latest outlook calls for mild temperatures across much of the country into early December and below-average heating demand.

Though liquefied natural gas export levels were strong during the covered week and have been throughout November, production has climbed and observers said markets are waiting for an eventual shift from fall to winter weather to bolster domestic demand. “Mother Nature is the wildest card of all,” said one participant on The Desk’s online energy platform Enelyst.

A Wall Street Journal poll, meanwhile, landed at an average injection of 10 Bcf, though estimates ranged from a decrease of 25 Bcf to an increase of 22 Bcf.

EIA reported an injection of 8 Bcf into storage for the week ending Nov. 6. A week earlier, the agency reported a withdrawal of 36 Bcf that marked the first pull of the season.

The South Central build of 13 Bcf led all regions and included an 8 Bcf injection into nonsalt facilities and an increase of 5 Bcf into salts. The Midwest and East regions followed closely with builds of 12 Bcf and 11 Bcf, respectively, according to EIA. Mountain region stocks declined by 2 Bcf, while Pacific inventories fell by 3 Bcf.

Looking ahead to next week, analysts are generally expecting a withdrawal. Bespoke modeled a 22 Bcf pull. “Lower prices should gradually tighten things back up some, though we still have a very bearish weather pattern to contend with,” the forecaster said.

EIA will release next week’s storage report on Wednesday, a day early because of the Thanksgiving holiday.