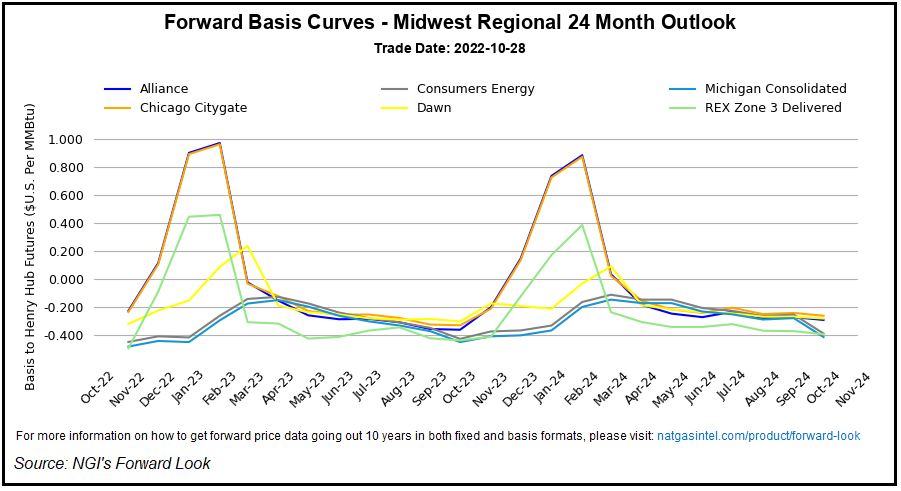 The latest forecast from Maxar’s Weather Desk Monday showed colder trends day/day for the eastern half of the Lower 48 in the 11- to 15-day period (Nov. 10-14). Both the American and European modeling added several heating degree days to their respective projections, Maxar said.

The forecaster said a pattern shift during the 11- to 15-day period would “allow for a colder air flow from the Northwest to the North-Central, while keeping the Southeast on the warmer side.”

An outlook for more heating demand toward mid-November was the key catalyst driving Monday’s price spikes, though not the only one, according to EBW Analytics Group senior analyst Eli Rubin.

“Speculator net short positioning is likely forcing some traders to buy back positions…amplifying the move higher,” Rubin said. “It would not be surprising to see the Nymex front month extend higher to test the 20-day moving average at $6.47.”

It would likely require another “significantly colder weather shift and the timely return of Freeport LNG” to “sustain higher valuations for Nymex gas,” the analyst added. “Still, a continued near-term turn colder could lead to further gains first.”

The Freeport liquefied natural gas operation in Texas was forced offline in June after a fire. It is slated to ramp back up in November, helping U.S. exporters meet robust European and Asian LNG demand and providing a bullish undercurrent for Nymex prices.

LNG demand in October reached a four-month high at 12.5 Bcf/d, Rubin noted. Freeport’s return could pull up to 2.0 Bcf/d of natural gas from domestic circulation to meet export demand.

“If the cold pattern extends into late November – and there is substantial room for further cold shifts – bearish speculator positioning suggests that Nymex gas winter futures may have higher to run,” Rubin added.

On the bearish side, production hovered around 101 Bcf/d on Monday, according to Bloomberg, keeping output near record levels. This, in concert with mild late October weather, is likely to result in a stout storage injection when the U.S. Energy Information Administration (EIA) releases its latest inventory report on Thursday.

Early estimates submitted to Reuters for the week ended Oct. 28 ranged from injections of 63 Bcf to 118 Bcf, with an average increase of 96 Bcf. That would more than double the five-year average injection of 45 Bcf.

“This Thursday’s EIA gas report will be a monster,” analysts at The Schork Report said Monday. “The end of this season is fixing to be one of the strongest, if not the strongest, ever recorded.”

This would follow last week’s EIA report, which showed a 52 Bcf injection into natural gas storage for the week ended Oct. 21. It compared with a build of 88 Bcf recorded by EIA during the same week a year ago and the five-year average increase of 66 Bcf.

The increase raised inventories to 3,394 Bcf but left stocks a bit shy of the five-year average of 3,591 Bcf.

Spot gas prices varied on Monday, even within regions, along with a mixed weather outlook and strong production.

National Weather Service (NWS) data on Monday pointed to continued mild weather this week, with seasonally comfortable highs from the 60s to the 80s across much of the country, though areas of the Midwest and Mountain West could prove exceptions. Markets in parts of those regions could see highs in the 40s at points this week, with forecasts also calling for chilly rains or snow showers.

Looking to next week, NWS forecasts show more of the same.

However, the outlook tilts cooler for the second half of November, with more widespread high temperatures in the 40s and freezing lows across the northern markets, indicating the potential for notably stronger demand in the weeks ahead.

Warmer-trending forecasts over the weekend, which showed near-term cold moderating by the second week of February, sent natural gas futures tumbling in early trading Monday. The March Nymex contract was down 14.3 cents to $2.706/MMBtu at around 8:45 a.m. ET. Weather models over the weekend shifted warmer for days seven through 15 of the outlook…