Natural gas futures on Monday floundered following forecasts for milder weather and estimates of strong production to start the week, continuing a slump as the December contract traded into expiration. 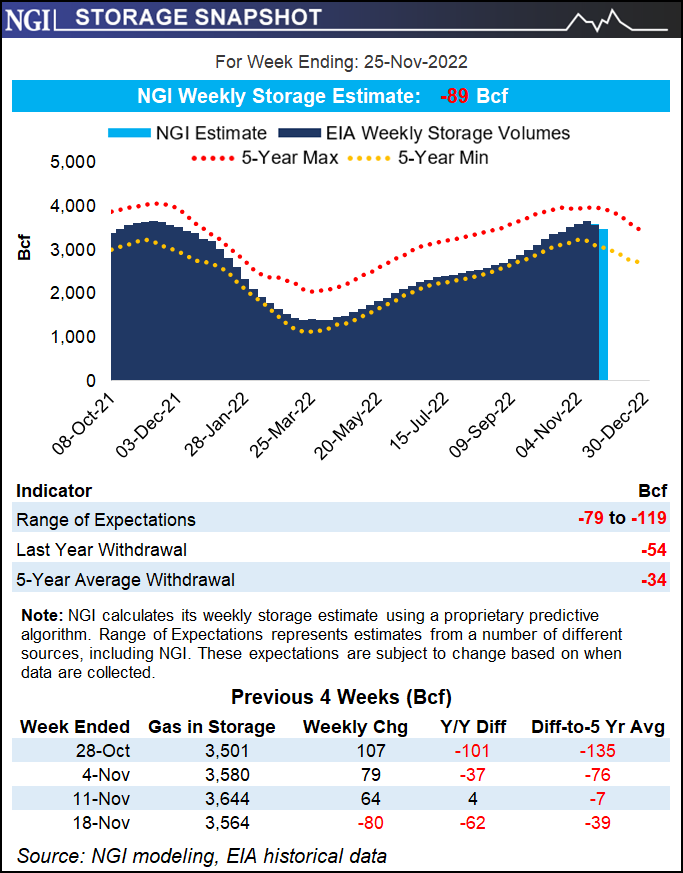 After falling in Friday’s session, the December Nymex natural gas contract dropped 31.2 cents day/day and settled at $6.712/MMBtu on Monday before rolling off the board. January, which takes over as the prompt month on Tuesday, slid 13.4 cents to $7.196.

NatGasWeather said forecasts over the weekend extended warmer trends for the first week of December and showed above-normal temperatures over the southern and eastern portions of the Lower 48.

“Much of the weather data favors a rather chilly U.S. pattern setting up Dec. 8-11,” a timeframe where “colder trends were observed” in the latest model runs, the firm said.

However, it’s questionable whether traders will “actually believe a colder pattern will arrive” given the data “once suggested a rather cold U.S. pattern was coming” during the first week of December “only to have it reverse notably warmer,” NatGasWeather added.

This “set a decisively bearish tone,” he said.

Additionally, production topped 101 Bcf/d on Monday, within 1 Bcf/d of the record level reached earlier this fall.

Still, Rubin added, bullish catalysts abound. He noted the specter of a rail workers strike “as soon as Dec. 9,” and the Freeport LNG terminal could begin to “show signs” of returning to service in the coming weeks, a development that would help U.S. exporters meet robust European and Asian demand for liquefied natural gas.

Absent a labor agreement between management and unions by Dec. 8, a railway worker walkout could follow. This would disrupt coal deliveries and drive demand for gas as a substitute.

Meanwhile, the Freeport LNG export plant in Texas, shut down for repairs following a June fire, said earlier this month that it expects to begin bringing operations back online in mid-December. That is a month later than an earlier target, but the company said it could boost export capacity by up to 2.0 Bcf/d in a few weeks.

This process could eat into domestic supplies just as withdrawal season is getting into full swing.

The U.S. Energy Information Administration (EIA) printed a pull of 80 Bcf natural gas from storage for the week ended Nov. 18.

The result easily exceeded a decline of 14 Bcf in the year-earlier period and a five-year average decrease of 48 Bcf. The pull lowered inventories to 3,564 Bcf. That compared with 3,626 Bcf a year earlier and the five-year average of 3,603 Bcf.

Gas deliveries are “off to a strong start,” analysts at The Schork Report said. “Last week’s EIA report is expected to be followed by an even larger delivery in this Thursday’s update.”

Indeed, analysts are looking for another bullish print relative to historic norms.

Early estimates for the week ended Nov. 25 submitted to Reuters ranged from withdrawals of 79 Bcf to 119 Bcf, with an average decrease of 103 Bcf. The estimates compare with a decrease of 54 Bcf during the similar week of 2021 and a five-year average pull of 34 Bcf.

NatGasWeather expected “light national demand” through Wednesday due to broad swaths of mild temperatures over the southern and eastern United States.

That noted, “a frosty weather system with snow” was expected to track into the northern Plains on Tuesday, then spread south and eastward on Thursday and Friday, the firm said. This could usher in lows from around zero to the 30s over much of the Lower 48.

However, a warmer U.S. pattern is expected to return across most of the southern and eastern parts of the country by the coming weekend “for a return to light national demand,” NatGasWeather said.

Next week, the South and East are forecast to remain warmer than normal, the firm added, while cold air in the West will again gradually blow into the nation’s midsection.

Hubs across both the East and South dropped Monday, leading the national average lower.

Meanwhile, on the pipeline front, Wood Mackenzie analyst Quinn Schulz noted that, from Monday through Friday of this week, El Paso Natural Gas Co. planned electrical unit maintenance at the Waha station, cutting up to 138 MMcf/d in regional flows. This comes alongside ongoing solar unit repairs at Waha, which has constrained flows by 159 MMcf/d.

In total, Schulz said, this leaves a net operational capacity of 97 MMcf/d through the constraint.  Waha prices on Monday bucked the broader trend as a result, rising 42.0 cents to $5.270.