With forecasts hinting at the potential for colder temperatures to move into the United States around the middle of December, natural gas futures rebounded in early trading Monday. After tumbling 11.8 cents in Black Friday trading, the January Nymex contract was up 8.3 cents to $2.926/MMBtu at around 8:45 a.m. ET. 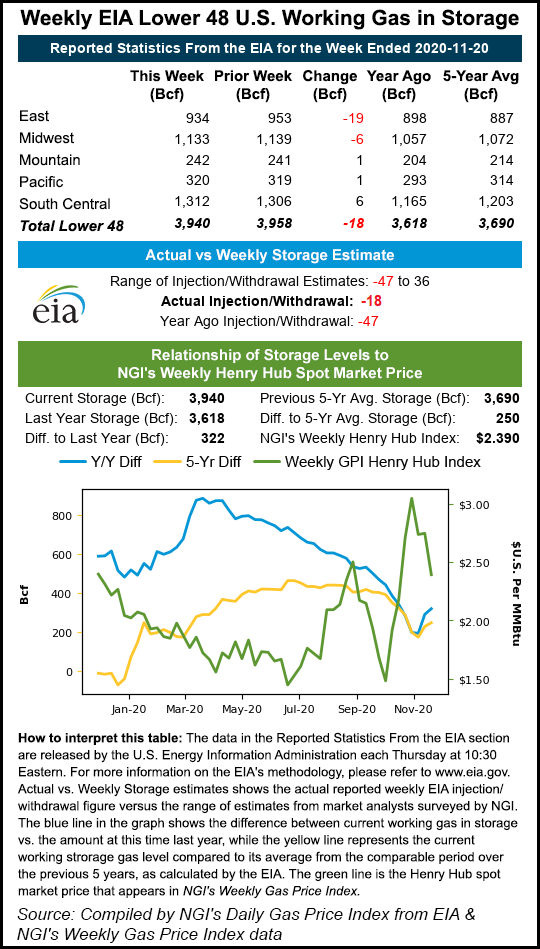 Natural gas futures rallied a third consecutive day in the short holiday week, as markets digested a storage decrease and hints of stronger demand before the December contract rolled off the board as the prompt month at the close of trading Wednesday.

Production levels hung around 90 Bcf – near six-month highs. Production built up in November following cuts tied to both the coronavirus pandemic and a record hurricane season that forced temporary shut-ins in the Gulf of Mexico several times over the summer and fall.

On the demand side, however, liquefied natural gas (LNG) levels recovered from pandemic-induced lows earlier this year. LNG volumes have hovered near or above 10 Bcf most of November, reflecting solid export demand from Europe and parts of Asia. Pipeline exports to Mexico have also held strong.

With production and LNG increases offsetting each other, to a degree, markets have focused squarely on weather patterns that have shifted slightly cooler for early next month but that forecasters say are difficult to gauge looking farther into December.

“This December pattern has become quite tricky, as long-range modeling remains very much in the warm-dominated camp, but the 15-day modeling suggests that variability could continue on into the middle of the month,” Bespoke Weather Services said. As of Wednesday, the firm said, models pointed to “the idea of the upper level low around Alaska pulling back toward Siberia, just enough to allow troughs to slide into the eastern U.S., giving colder variability to the East and South.”

This could result in the first third of December coming in near or slightly colder than norms over the past five to 10 years, according to the firm. “It would not take much shift eastward in the global circulation, however, to send the pattern back warmer” next month following a warmer-than-average November.

Wednesday’s Energy Information Administration (EIA) storage report – delivered a day early because of Thanksgiving – marked a return to withdrawals, a development markets expected but nevertheless welcomed after storage injections the two prior weeks.

Prior to the report, a Bloomberg survey landed at a median 19 Bcf decrease, while a Reuters’ poll found a median decrease of 21 Bcf. NGI’s model predicted a 35 Bcf pull.

While weather remains uncertain, analysts expect that the industry has now entered a sustainable withdrawal season.

“It wasn’t until the last month or two of the traditional injection season — April through October — that the market tightened enough to escape a major storage crunch,” Nasta said Wednesday. “In reality, it took the multi-pronged effects of production cutbacks — in part from hurricane-related disruptions — higher LNG and pipeline exports, and cooler fall weather, to make that happen.”

Amid a resurgence in cases, the pandemic remains a wildcard. Several countries in Europe ordered new business activity restrictions in November, as have several states and cities across the Lower 48. Residential heating demand is broadly expected to rise with more people at home, but it remains to be seen if it offsets, exceeds or falls short of potential declines elsewhere as business activity slows because of new restrictions.

Though at least three vaccines are set to hit the market late this year or early next, analysts worry about an economic slump this winter because it will take months to inoculate a majority of the population.

Meanwhile, the number of people treated in U.S. hospitals with serious coronavirus complications hit a record for a 15th straight day on Tuesday, with more than 88,000 people hospitalized, according to the Covid Tracking Project.

Spot gas prices declined for a second consecutive day, as cold air moved out of the East and near-term demand lightened, putting downward pressure on the national average.

NatGasWeather said conditions over the holiday weekend were expected to be mostly benign across the Lower 48, though cold snaps and demand were both expected to pick up over the first few days of December.

The strongest demand in the mid-range forecasts was projected for Tuesday through Thursday, “due to the combination of a cold shot across the Midwest and Northeast” and “a second system tracking across Texas and the South,” the forecaster said.

After those systems push through, “the western, central, and northern U.S. will see a mix of weather systems…but overall warmer versus normal,” NatGasWeather said.

Beyond weather in December, Genscape Inc. analysts said Wednesday they were studying the pandemic’s impact on industrial gas burn in the United States. They noted industrial demand dropped last spring and remained subdued into the summer as virus outbreaks and associated business restrictions limited demand in several industries.

Specifically, Genscape data showed industrial demand from April through June of this year averaged 10% below the same period a year earlier, led lower by a 30% decline in gas use in the metals and mining sector, a 25% drop in use for ethanol production and an 11% dip in use for oil and gas production.

“Demand is down again compared to the previous year,” Genscape said, referring to the current wave of outbreaks in November. However, the firm said, the overall decline is less pronounced and likely impacted more by mild late fall weather than the virus – at least so far – potentially a reflection of American businesses adapting to the pandemic.

“Sample demand for ethanol production this month is 5% below the previous year while metals and mining are up slightly,” Genscape said. Demand “for oil and gas production is still down significantly this month but is increasing following a recent jump in production.

“Industrial demand for natural gas could still hit headwinds similar to earlier in the year,” analysts added, “but so far it seems to be holding steady despite a third wave of Covid cases and mandated restrictions.”