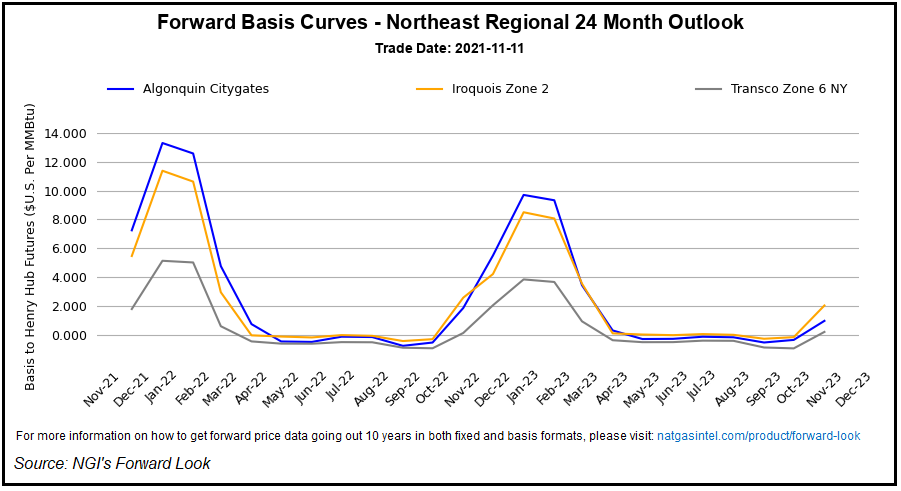 The December Nymex contract declined 35.8 cents day/day and settled at $4.791/MMBtu. January fell 36.5 cents to $4.880 on Friday. Futures had mustered momentum a day earlier – following losses the three prior days – only to resume the downward slide to close the week.

NGI’s Spot Gas National Avg., in contrast, advanced 9.5 cents to $4.690 as wintry conditions blew into the Midwest and were expected to push east over the weekend, fueling heating demand.

Bespoke Weather Services said that, while the Northern Plains and Great Lakes were walloped with freezing temperatures, blustery winds and sporadic snow showers late in the week, the outlook for much of the Lower 48 through November failed to impress futures traders.

“That has been the theme for a while now, as the pattern refuses to show much deviation from normal,” Bespoke said. Forecasts are “simply bouncing around with some modestly warmer and colder periods in all areas from the Plains to the East…” The “only persistent anomalies” are the “warm ones out in the West, where of course, there are fewer people, so less significance to natural gas markets.”

At “this time of year,” the firm added, “it is mostly a play on the weather forecast, which keeps our confidence on the low side in terms of guessing which way the market will move in the near term.”

U.S. production, meanwhile, averaged more than 95 Bcf/d over the past week, according to Bloomberg estimates. That is up about 3 Bcf/d from autumn lows, adding pricing pressure.

“The revival of dry gas production over the past three weeks has been the dominant weather-normalized market catalyst, with sharply higher supply elevating the projected storage trajectory and narrowing risks of extreme winter price spikes,” EBW Analytics Group said Friday.

The TPH analysts said both power and residential/commercial demand dipped week/week, with the latter lagging five-year average levels by around 5 Bcf/d as of Friday — a “key driver in our looser modeled balances” for the next EIA print.

U.S. exports of liquefied natural gas (LNG), meanwhile, topped 12 Bcf at one point early this month and held near 11 Bcf on Friday – providing a stable demand driver. Demand from Europe, where gas supplies are light as winter weather is forecast to settle in during the second half of November, is propelling strong U.S. LNG volumes.

However, despite a migrant crisis and political turmoil affecting countries in between Russia and the heart of Europe that could force pipeline interruptions, Russia reiterated in the past week a pledge to bolster deliveries and help Europe address gas shortages this winter.

For all the headwinds facing the futures market, spot prices advanced on Friday amid a late-week blast of winter-like weather.

NatGasWeather noted that comfortable highs of 50s to 80s permeated the southern and eastern expanses of the Lower 48 on Friday. However, the wintry conditions that swept across the upper reaches of the nation’s midsection were spreading east and projected to deliver freezing lows to portions of the heavily populated East Coast.

This was enough to get furnaces cranking, NatGasWeather said, propelling cash prices, particularly in the East.

Physical prices in the West proved the exception on the day, with SoCal Citygate down 88.5 cents to $5.090.

Seasonally warm weather is forecasted to return by the middle of the coming week, NatGasWeather said, and demand could remain light through late November. The firm said forecasts called for the southern half of the country to experience mild to warm highs of 50s to 70s over the final full week of the month.

On the pipeline front, meanwhile, Tennessee Gas Pipeline said from Saturday through next Friday (Nov. 19), maintenance work is planned on its Segment 299 in New York. This should reduce operational capacity on the line from 827,000 MMBtu/d to 239,000 MMBtu/d, according to Wood Mackenzie analyst Kara Ozgen.

The affected line helps transport supply from Northeast Pennsylvania through Upstate New York to New England. “If temperatures grow colder during this timeframe in the Northeast, we could see some upward price movement at Algonquin Citygate,” Ozgen said.