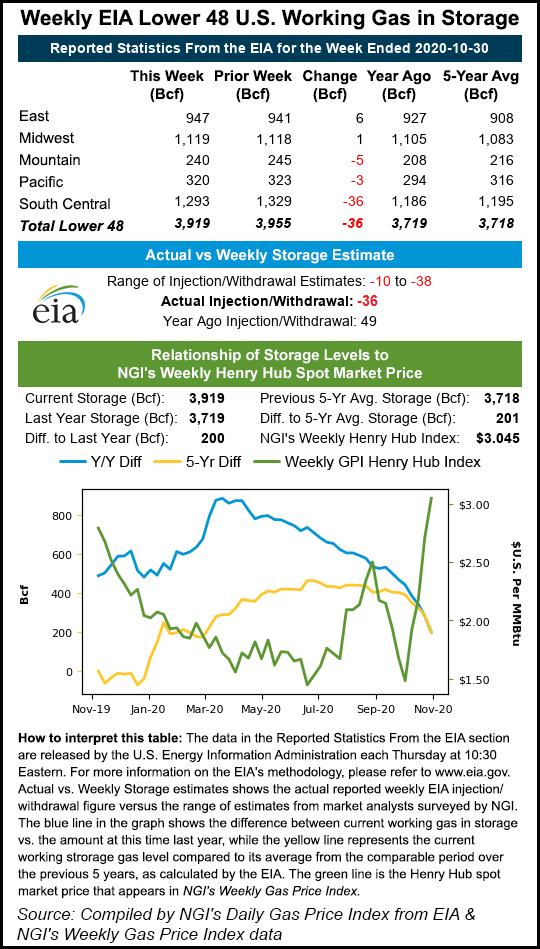 LNG feed gas volumes hovered close to 2020 highs around 10 Bcf Wednesday, as U.S. export destinations in Asia and Europe were expected to boost demand during the winter months. Bullish LNG trends outshined pleasant fall weather a week ago. However, the dynamic shifted this week as U.S. forecasts have increasingly called for warmth – and minimized heating needs – deep into November. This amounts to a delayed onset of winter and the peak demand for natural gas that accompanies the season.

“As it stands now, the pattern looks like it would remain warm into the 16- to 20-day thanks to a strong upper level trough from Alaska down the west coast of North America, allowing the downstream warm ridging to continue,” Bespoke Weather Services said.

The current pattern puts this month on track to finish as one of the top five warmest Novembers on record in terms of gas-weighted degree days, Bespoke said.

“It remains a weather-versus-balance battle, but one that weather is winning as long as we see such high-end warmth,” the firm said. “We still have no clear hints that we will move colder even into late-month at this time.”

All eyes will turn next to Thursday’s Energy Information Administration (EIA) storage report, with analysts expecting a bullish result for the week ended Oct. 30. Production was down during the week because of shut-ins in the Gulf of Mexico (GOM) ahead of Hurricane Zeta’s arrival last Wednesday. At the same time, LNG feed gas demand climbed during the week and, amid a cold blast in the Midwest, overall domestic demand was solid.

NGI forecasted the first withdrawal of the season, a 28 Bcf pull, on par with Energy Aspects’ preliminary estimate.

For the comparable week a year earlier, EIA recorded a 49 Bcf injection into storage. The five-year average is a build of 52 Bcf.

Injection results from each of the three previous storage reports were bullish relative to median expectations.

“While a bearish mid-November weather outlook has helped to assuage winter supply adequacy concerns, it is too early for the market to be throwing in the towel,” EBW Analytics Group analysts said.

“Instead, recent bullish EIA storage reports appear to reinforce the notion that structural changes from increased working-from-home and schooling-at-home are increasing space heating demand per gas-weighted heating degree days,” EBW said. “When cold weather does arrive, it is likely that higher-than-expected demand will convince the market to add back the recently lost winter-contract premiums.”

Analysts noted that preliminary results pointed to Republicans retaining control of the U.S. Senate and Democrats maintaining an edge in the U.S. House, though the majority each holds looked likely to narrow. That left analysts to predict gridlock in the nation’s capital regardless of who is in the White House, potentially meaning only modest and gradual change, if any, in regulations affecting the energy sector over the next two years.

“Perhaps the biggest conclusion to be drawn at this stage is that there is only a small likelihood that existing oil and gas tax incentives will be removed in the U.S. – even if Biden emerges as the winner – given the narrow margin of victory and a probable Republican majority in the U.S. Senate,” said Rystad Energy analyst Artem Abramov.

However, Abramov added, other sectors anticipating another round of federal government stimulus may be disappointed, if inaction in Washington prevails.

“The impact on the U.S. economy in the short term could be quite negative,” the analyst said. “Washington will struggle to agree on any new stimulus package.”

Spot gas prices on Wednesday declined across the Lower 48 along with mild temperatures and the continually unfavorable weather forecasts.

Warmer-than-normal conditions are projected for most of the country the rest of this week, with comfortable highs in the 50s and 60s throughout northern regions and 70s and 80s over much of the South, according to a National Weather Service outlook.

“While further recovery potential remains to be seen on pipelines such as Destin, Discovery GT, and MS Canyon, current activity in the Caribbean could further jeopardize these recovery efforts over the next 10 days,” Genscape said. On Tuesday, Hurricane Eta “made landfall along Nicaragua’s eastern coast as a Category 4 storm” and “is expected to do a 180-degree turn towards Cuba. Thereafter, model consensus suggests Eta will continue to the northwest upon entering the Gulf of Mexico and could further threaten gas production later next week.”

In the Midwest, where temperatures swung from freezing less than a week earlier to highs in the mid-70s Wednesday, Chicago Citygate lost 25.0 cents to $2.390, and Dawn dropped 26.5 cents to $2.405.