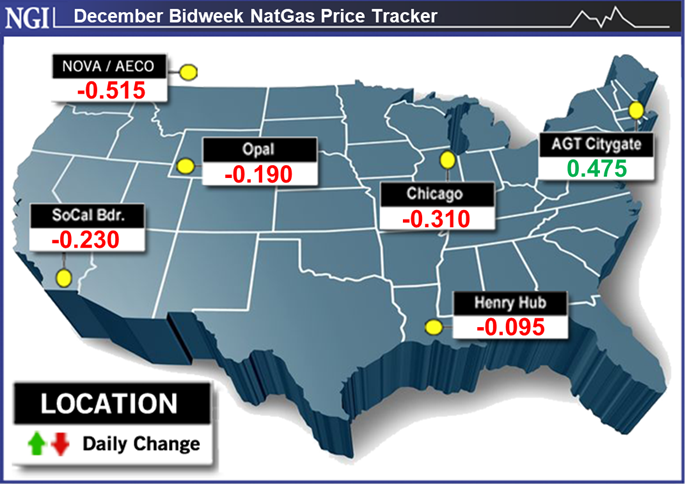 The December Nymex natural gas futures contract rolled off the board last Wednesday at $2.896, up 12.1 cents day/day as weather-driven demand was forecast to improve and the U.S. Energy Information Administration (EIA) reported a storage withdrawal of 18 Bcf for the week ended Nov. 20. LNG levels were also strong – near 10 Bcf, as they were most of November – amid steady demand for exports ahead of winter.

The January futures contract, meanwhile, closed out November at $2.882/MMBtu after taking over as the prompt month following the Thanksgiving holiday. Analysts attributed the recent advances to LNG strength and increased expectations for colder weather across much of the Lower 48 in the first half of December – better for heating demand than what traders saw during bidweek.

EBW Analytics Group said that, “following exceedingly mild weather in mid-November and the Thanksgiving holiday,” even briefly cooler temperatures to start the first week of December may allow weather-driven demand “to springboard 10.0 Bcf/d higher” week/week. Additionally, a “seasonal progression towards colder temperatures” before mid-December, could drive gas demand “another 8.5 Bcf/d higher next week.”

Against that backdrop, futures were down overall for November, as relatively weak heating demand alongside greater production more than offset ongoing LNG strength. This weighed on markets during bidweek as well. Production hovered around 90 Bcf/d during the week, roughly 3 Bcf/d above month-earlier levels, while U.S. heating demand was nearly 30 degree days below normal over the final full week of November.

A surge in the coronavirus pandemic added another layer of demand threat, as soaring case counts during November necessitated new government restrictions on businesses in several states and warnings against travel that started to impinge on industrial demand, according to Genscape Inc. analysts. Reported cases of the virus were higher in November in the United States than any previous month, according to Johns Hopkins University. Cases also spiked across much of Europe this fall.

“Demand is down again compared to the previous year,” Genscape said, referring to the impact of outbreaks in November. The firm said industrial gas use ticked down slightly last month – less so than before because the latest restrictions are less onerous on businesses overall. However, with the specter of further spread as more people gather indoors during the winter months and potentially more business limitations, demand “could still hit headwinds similar to earlier in the year,” the EBW analysts noted.

Bidweek prices dropped the most at hubs in regions that, normally by late November, experience steady heating demand but this year saw such demand ebb and flow.

An exception was the Northeast, where heating demand generally held strong. Algonquin Citygate advanced 47.5 cents from November to average $3.740 during bidweek.

Looking ahead, markets are fixated on weather demand.

Bespoke Weather Services said that both the domestic and European weather models have wavered between modest gains and losses in heating degree days recently. The latest outlook Tuesday showed the “first half of December variable, close to the 5-year and 10-year normal.” That would mark an improvement from November, but less so than earlier forecasts.

“We need to see more convincing signs of a colder shift” to drive continued gas price momentum, the firm said.

“National demand will be strong the next two days as one system exits the East/Southeast with chilly lows of 20s and 30s. A second new system is currently dropping into the western and central U.S. and will bring frosty lows of 0s to 30s in the coming days,” the forecaster said Tuesday.

“However, the eastern U.S. will warm back into the 50s and 60s across most areas late in the week to ease national demand back to lighter levels,” the firm added. “Another weather system is expected into the Southeast and then up the East Coast this weekend into Monday for regionally stronger demand. However, the rest of the U.S. will be exceptionally comfortable for early December, including the important Midwest region that will be 10-25 degrees warmer than normal.”