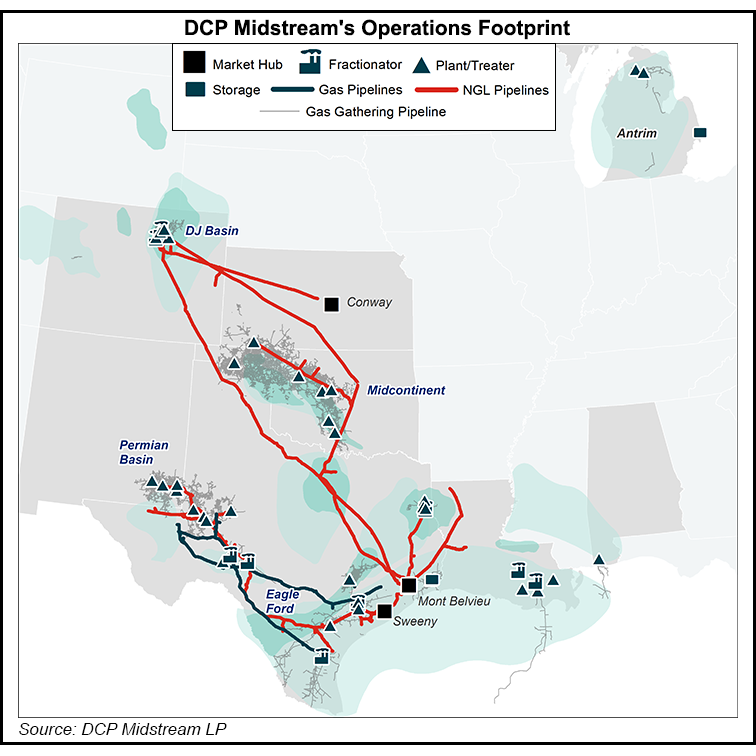 CFO Sean O’Brian said the midstream operator “saw increased volumes in all regions” during 2Q2022 after facing weather issues in the first three months. It also benefited from “an uptick in activity throughout the portfolio.”

Operations are focused in the Permian Basin and the Denver-Julesburg (DJ) Basin. It also has assets in the Eagle Ford and Haynesville shales, as well as significant holdings in the Midcontinent.

The key growth drivers for DCP were accelerated activity from key Permian Delaware sub-basin customers, O’Brian said, followed by increased gas capture in the Haynesville and Eagle Ford. The company also saw a 2% increase in volumes from the DJ compared to 1Q2022 and 5% growth in the Midcontinent. O’Brien credited “smaller independent producers ramping up activity and reworking existing legacy wells.”

DCP also disclosed a recently completed $160 million acquisition of the James Lake pipeline system in the Permian. The 230-mile, 120 MMcf/d capacity system services producers in Ector, Andrews and Winkler counties. The system was operated by Canyon Midstream Partners LLC to expand sour gas processing capacity and was acquired in 2019 by Woodland Midstream LLC.

CEO Wouter van Kempen said the James Lake acquisition was another example of how the financial performance was allowing the company to expand its footprint.

Asked about further acquisitions or expansions, especially in the Permian, van Kempen said deal activities are increasing, and private firms are becoming “motivated sellers.” However, he said DCP would remain “disciplined.” The same kind of strategy applied to potential natural gas liquids (NGL) pipeline expansions, even as DCP’s systems near capacity.

“We’re not going to do a ‘build it and they will come’ approach. We will always be capital efficient,” van Kempen said.

DCP reported a substantial increase in income from its logistics and marketing segment from NGLs. Throughput on the majority-owned Sand Hills and Southern Hills systems increased on growth in the Permian. It also saw higher volumes on the Front Range and Texas Express pipelines, of which DCP holds minority ownership.

Net income for DCP’s G&P segment ballooned compared to the year-ago quarter despite a marginal increase in volumes. The firm reported its average wellhead volumes grew to 4,383 MMcf/d in 2Q2022 compared to 4,338 MMcf/d the year prior. Meanwhile, G&P net income was reported at $322 million during the quarter compared to $3 million in 2Q2021.