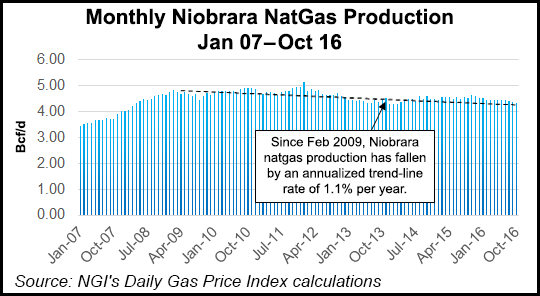 Midstream is a 50/50 joint venture of Phillips 66 and Spectra Energy. The transaction, which simplifies the companies’ corporate structure, has closed, and on Jan. 23, the combined company is to be renamed DCP Midstream LP and trade on the New York Stock Exchange under symbol “DCP.”

“This transformational transaction provides a platform of premier assets with strong growth opportunities in the key U.S. producing basins at a multiple that paves the way toward future distribution growth,” said Wouter van Kempen, CEO of both Midstream and DPM.

“The transaction benefits both our unitholders and our owners [Phillips 66 and Spectra] with a simplified structure and is the logical progression following our successful DCP 2020 strategy execution to date. We’ve added fee-based margins, sold noncore assets, strengthened Midstream’s balance sheet and reset the overall cost structure of the DCP enterprise to make the assets more MLP [master limited partnership]-friendly.”

The combination creates the largest gathering and processing master limited partnership in the United States with a pro-forma enterprise value of $11 billion. It is projected to be distributable cash flow accretive to DPM unitholders at current strip prices.

During a conference call to discuss the transaction, van Kempen said the time was right for such a deal.

“We believe that the industry has turned a corner to a much more constructive environment, and we anticipate 2017 will be the inflection point as we shift toward growth while sustaining our foundational, operational improvements over the past years,” he said.

“Today we are in the right commodity and industry environment to combine these two companies.”

The combination brings together DPM’s existing assets with Midstream’s assets in the Permian Basin, including the Delaware sub-basin, the Denver-Julesburg (DJ) Basin and the Midcontinent, as well as an additional one-third interest in both the Sand Hills and Southern Hills NGL pipelines. DPM has a footprint that creates “a strong, long-term platform for organic growth opportunities in the premier basins in the U.S., starting with expansion projects in the DJ Basin and on Sand Hills Pipeline,” the companies said.

All together there are an estimated $1.5-2 billion worth of capital opportunities for the combined entity. These include expansions in the DJ Basin driven by increasing producer activity; capacity expansion in the Permian as well, driven by Delaware and Midland sub-basin activity; and Midcontinent system optimization opportunities, the companies said.

The transaction increases Phillips 66 and Spectra Energy’s ownership in DPM to 38%, allowing them greater participation in increased earnings from future growth. To support a minimum 1.0 times distribution coverage ratio, Phillips 66 and Spectra have agreed, if required, to provide incentive distribution rights (IDR) givebacks up to $100 million annually through 2019, which provides downside protection for LP unitholders.

The DCP 2020 strategy has reset the combined company with cost reductions, improved asset reliability and increased fee-based earnings, van Kempen said. In 2017, 70% of the pro-forma margin is either fee-based or hedged, providing downside protection while preserving upside potential in an improving commodity environment.

“Our combined diversified portfolio provides highly accretive bolt-on expansion opportunities starting with the Denver-Julesburg Basin, where we will build a new 200 MMcf/d processing plant that is expected to come online in late 2018 with an additional 200 MMcf/d plant in 2019, resulting in a 50% increase in DJ Basin capacity. Additionally, we are expanding our Sand Hills NGL pipeline to its full 365,000 of capacity by the end of 2017, an increase of 30%” van Kempen said.

The companies on Wednesday also announced expansion projects in the DJ Basin and on the Sand Hills Pipeline.

DPM plans to construct a 200 MMcf/d cryogenic natural gas processing plant (Mewbourn 3) in the DJ Basin, its 10th plant in the basin, projected to be in service by the end of 2018. Additionally, DCP collaborated with several producers to form a development plan to add another 200 MMcf/d plant by mid-2019. Together, these projects are expected to increase capacity by 50% to 1.2 Bcf/d. DPM also plans to complete the next phase of its Grand Parkway low-pressure gathering project and associated compression expansions by the end of 2018.

DPM also is in the process of constructing additional field compression and plant bypass infrastructure that would add 40 MMcf/d of incremental capacity during this summer. The new plants will connect to the Front Range Pipeline, one-third owned by DPM, for NGL takeaway to Mont Belvieu, TX.

DJ Basin operators have had to deal with elevated gathering line pressures, which can be a particular problem during hotter months, Wells Fargo Securities analyst David Tameron said in a note Wednesday.

“The announcement of this additional local gas processing capacity in late 2018 and 2019 helps alleviate these constraints longer term,” Tameron said. “However, in the interim, we still see elevated line pressure as an issue facing operators in the basin who might be forced to look to small projects and work-arounds (such as DPM’s 40 MMcf/d of incremental capacity to be completed this summer) to address their gas processing/takeaway needs until these larger projects come online.”

Additionally, DPM is expanding NGL takeaway capacity on Sand Hills by 30%, or 85,000 b/d, to 365,000 b/d, through the addition of four pump stations and a pipeline loop to meet NGL production growth from owned and third-party plants in the Delaware sub-basin. In-service is expected during the fourth quarter. The newly combined DPM owns two-thirds interest in Sand Hills and Phillips 66 Partners owns the remaining one-third interest and each will fund their proportionate share of the expansion.

Sand Hills provides NGL takeaway capacity to the Mont Belvieu market from both owned and third-party plants in the Permian Basin, including Southeast New Mexico, Delaware sub-basin and Cline Shale in West Texas.

Under terms of the transaction, Midstream has contributed subsidiaries owning all of its assets to DPM, plus $424 million of cash, in exchange for 31.1 million DPM units ($1.125 billion) and DPM assuming $3.15 billion of Midstream debt, for an estimated transaction multiple of eight times based on current commodity strip prices.

The cash proceeds of $424 million contributed to DPM would be used to repay its revolver, fund its growth projects or prefund repayment of DPM debt maturing in December, the companies said. Phillips 66 and Spectra have retained their 50/50 joint ownership of DCP Midstream LLC, which owns the IDR and 38% of the outstanding DPM general and limited partner units.