Denver-based DCP Midstream LP said it plans to expand capacity on its Southern Hills natural gas liquids (NGL) pipeline system in the second half of 2019 by roughly 40,000 b/d. 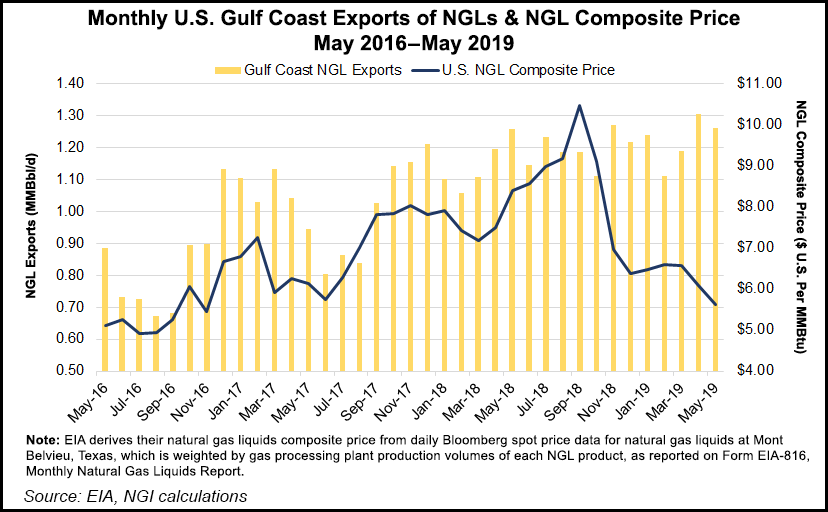 DCP plans to bring up to 230,000 b/d online by the fourth quarter of 2020, which would boost takeaway capacity from Colorado via interconnections in Kansas to petrochemical plants in Mont Belvieu, the NGL complex east of Houston.

The Southern Hills expansion announcement made in the 2Q2019 results announcement coincides with the launch of DCP’s 200 MMcf/d O’Connor 2 processing plant in Weld County, CO, designed to boost natural gas takeaway from the Denver-Julesburg (DJ) Basin.

“The Southern Hills expansion…is really all about the growth that we have in the DJ and gives us the flexibility to work those barrels and potentially leverage those barrels into more downstream investments,” said CEO Wouter van Kempen.

In May 2018, DCP said it planned to build a 25-mile pipeline in the DJ through affiliate DCP Southern Hills Pipeline LLC to connect to SemGroup Corp.’s White Cliffs pipeline, part of which was converted to move NGLs.

DCP has been engaged in a multi-year planned growth strategy that includes up to 1.5 Bcf/d of incremental processing and bypass capacity, and additional NGL and gas takeaway capacity.

DCP and SemGroup in July extended open seasons for additional NGL capacity on the White Cliffs and Southern Hills pipeline, which concluded earlier this month.

DCP has been working on other NGL expansions, including the Texas Express Pipeline that runs from the Texas counties of Skellytown and Carson to Mont Belvieu, and the Front Range Pipeline, which runs from Weld County to Skellytown.

DCP earlier this year had said it planned to place into service expansions of Front Range by 100,000 b/d and Texas Express by 90,000 b/d, but during the 2Q2019 earnings call, management said both expansions were likely to be placed into service in the fourth quarter, citing regulatory delays.

“There were some regulatory delays in…one specific county here in Colorado. Those have been solved now,” van Kempen said.

With the natural gas market still waiting for more impressive cooling demand to show up in forecasts, futures probed lower in early trading Tuesday. The June Nymex contract was down 3.7 cents to $2.895/MMBtu at around 8:50 a.m. ET. Technical support around $2.900 held for the June contract in Monday’s trading, but this support level…