It was a week not made for the bulls as only a single actively traded market point was able to escape the scythe of selling with many market points into the red by double digits. 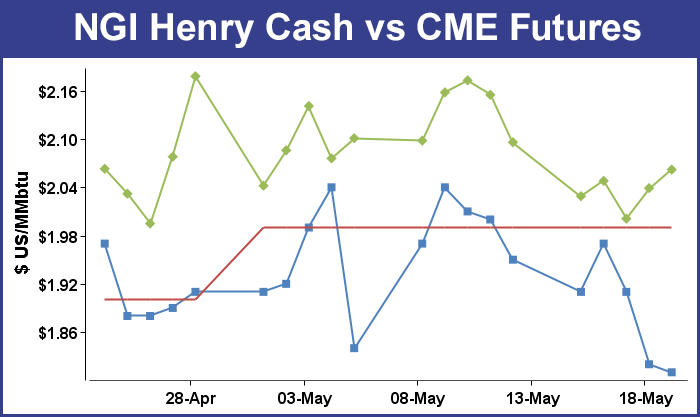 Losing the least regionally were East Texas and South Louisiana, shedding 12 cents to $1.78 and $1.79 respectively, and South Texas was just a step behind, dropping 13 cents to $1.77.

If one analyst is correct, the week’s declines may be at or near a low-water mark for prices going forward.

“In our view that is the only scenario in which that would occur. We see the current prices for natural gas as being almost a worst-case scenario. That doesn’t mean that prices will immediately go straight up, and over the next two to three weeks I think we will see further declines, but we view that as very temporary and a direct product of the fact we are in the middle of the shoulder season when demand for natural gas is at its low point for the year.

“We see many analysts as way off base,” Weismann said. Underlying his analysis is his belief that many of the assumptions on the natural gas market “are off the mark.”

On Thursday the Energy Information Administration (EIA) reported a 73 Bcf storage injection in its 10:30 a.m. EDT release, about 5 Bcf less than what traders were anticipating. Curiously, June futures dropped to a low of $1.952 shortly after the figures were released and by 10:45 a.m. June was trading at $1.981, down 2.0 cents from Wednesday’s settlement At the close, however, June had settled 3.8 cents higher at $2.039 and July had added 6.4 cents to $2.195.

“We were hearing a 78 Bcf increase, but the market was poised to fail when it couldn’t break through that $2.18 to $2.19 area,” a New York floor trader told NGI.

Inventories now stand at 2,754 Bcf and are a robust 791 Bcf greater than last year and 795 Bcf more than the five-year average. In the East Region 22 Bcf were injected and the Midwest Region saw inventories increase by 24 Bcf. Stocks in the Mountain Region rose 5 Bcf, and the Pacific Region was higher by 5 Bcf. The South Central Region added 17 Bcf.

In Friday’s trading, buyers and sellers of natural gas for weekend and Monday delivery fought to a standstill and prices were nearly unchanged.

With weather mild and gas plentiful, buyers saw no reason to commit to three-day deals. With the exception of California, most points moved within a few pennies of unchanged, and the NGI National Spot Gas Average was down a penny to $1.63.

Futures managed a second constructive close on the heels of a supportive government inventory report. At the close, June had risen 2.3 cents to $2.062 and July was higher by 1.2 cents to $2.207.

Weekend and Monday gas at California points was solidly in the red as forecasts called for cool temperatures in major markets. AccuWeather.com reported that the high Friday in Los Angeles of 69 degrees was expected to drop to 67 Saturday before reaching 70 on Monday. The normal high in Los Angeles is 75. San Francisco’s Friday high of 61 was seen holding Saturday and reaching 62 on Monday. The seasonal high in San Francisco is 64.

If the assessment of a leading industry consultant is correct, higher demand and ostensibly higher prices may be in store for next week. Industry consultant Genscape said, “Lower 48 demand will start showing some recovery next week as temperatures in major demand centers warm back up to seasonally-normal levels, although the resulting demand growth is not expected to be drastic. Genscape mets are forecasting Lower 48 population-weighted CDDs (which are presently in negative territory) will return to seasonal norms by Tuesday, then run as much as 13 CDDs above normal into the weekend. The bulk of this warmth will be focused on the Southeast-Mid-Atlantic (SEMA), Texas, Midcon and Midwest.”

Genscape calculates that demand in SEMA will reach 14.34 Bcf/d by Thursday and Midwest requirements will climb to 7.28 Bcf/d. Appalachia demand is anticipated to rise by 2.1 Bcf/d and New England demand is forecast to top out Monday just above 2 Bcf/d and remain in a range of 1.7-1.9 Bcf/d for the rest of the week. Western demand is seen flat, Genscape said.

Top analysts see the market marking time but are leaning to a position where upside risk exceeds that to the downside. “While a cursory glance at [Thursday’s] natural gas market suggests that a smaller than expected storage injection contributed to a modest price advance, we viewed the strengthening as largely technically related,” said Jim Ritterbusch of Ritterbusch and Associates in closing comments Thursday.

“An early counter-intuitive decline following release of the 73 Bcf injection puled value briefly to within two ticks of our longstanding downside target of $1.95. Although we didn’t see any shifts in the short term temperature views today, we feel that today’s lows may be as close as we get to our bearish objective. From here, we will expect some price consolidation between today’s lows and the 2.09 level pending updates to the weather views during the coming weekend.

“So although we are not yet ready to discard a bearish stance, the market has moved into a position where upside price risk would appear to exceed that to the downside. With this in mind, we are hesitant to approach the market from either side at current levels and we are now looking for a place to establish long summer-short winter bull spreads.”

Gas buyers tasked with procuring supplies for weekend power generation across the PJM footprint will not have a lot of wind energy to work with. WSI Corp. in its Friday morning report said, “High pressure will continue to nose into the power pool today. This will result in partly sunny skies and pleasant temperatures with highs in the mid 60s and 70s. High pressure will depart and allow a storm system to traverse the power pool from west to east tonight into Saturday with rounds of rain.

“Temperatures will dip back into the mid 50s, 60s to low 70s by Saturday and Sunday. A trailing upper-level low will lead to variable cloud cover and a chance of a few showers across eastern PJM through Monday, but fair and mild conditions are expected to emerge across the West. Fair and warm conditions will overspread the power pool during Tuesday with highs in the 70s to low 80s.

“Wind generation is expected to creep up during the next couple of days, with output between 1-2.5 GW. Wind generation will subside during Sunday into Monday morning, but a mild southerly wind will cause wind gen to trend back up late Monday through Tuesday.”