It’s now a waiting game for the Dakota Access Pipeline (DAPL) after both sides in the oil pipeline’s ongoing legal battle have had their say regarding the motion to stay a lower court’s order to temporarily shut and empty the system. 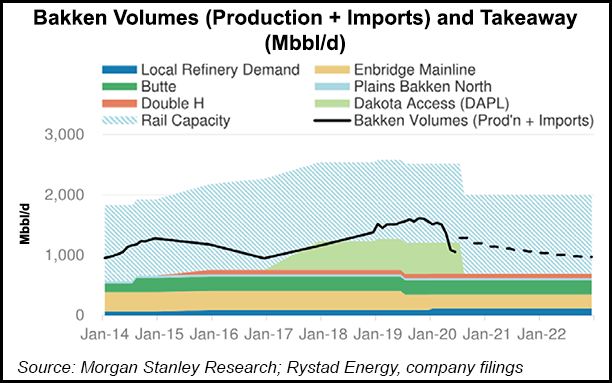 In a filing Thursday (July 23) in the U.S. Court of Appeals for the D.C. Circuit, the U.S. Army Corps of Engineers and DAPL disputed the Native American Tribes’ argument, filed earlier this month, that “temporarily shutting down the pipeline means that it will be marginally more expensive for some producers to ship oil out of North Dakota — nothing more.”

The Tribes, led by Standing Rock Sioux, noted that “oil production in North Dakota has fallen dramatically in recent months due to factors unrelated to this case” and said DAPL’s continued operation “exposes the Tribes to ‘catastrophic risks’ that have never been properly examined as the law requires.”

DAPL countered, indicating “there is little common sense support for the proposition that digging harder gets you out of a hole faster.” The “irreparable harm” of shutting down the 570,000 b/d pipeline “would be substantial.” It further argued that amending the vacatur order to allow an orderly shutdown “would not solve the problem.”

In a scenario where DAPL is permanently decommissioned, rail would transport the marginal barrel, but higher shipping rates would be incurred and Bakken Shale economics would be impaired relative to other plays, according to Morgan Stanley Research.

When Bakken production peaked at 1.5 million b/d in 4Q2019, DAPL represented 40% of that output, said a Morgan Stanley team led by equity analyst Stephen Byrd. With DAPL in service, researchers estimate that all Bakken volumes could be shipped out of the basin via pipeline as of 3Q2021, with pipeline economics including $5-6 transport cost to the Gulf Coast setting the differentials.

“While we believe ample rail capacity exists, we expect shipping rates to the Gulf Coast that range $9-11/bbl would set differentials,” the researchers said.

In a shutdown scenario, Bakken’s price discount to West Texas Intermediate could stabilize in the high single-digit range but would come in wider than the current level of around $2, effectively weakening in-basin economics, they said. “In the short term, differentials could trade wider than transport economics as crude flows adjust to the large shift in takeaway from the basin.”

At current oil prices, which continue to hover around $40, researchers do not see growth from the Bakken, which moderates the pipeline’s need in the near term. “However, it remains critical to any future volume recovery.”

The D.C. Circuit has not indicated a timeline for a decision or whether it intends to hear oral arguments in the case, although a decision could come soon if the court rules on the briefs alone.

The ClearView team said the biggest hurdle the Corps and DAPL face is demonstrating that they are likely to prevail on the merits of their appeal, which would direct the Corps to undertake an environmental impact statement (EIS). In addition, analysts think the challenge in delineating the difference between the economic consequences of pandemic-related demand destruction and a closure of the pipeline is “particularly difficult.”

If a stay is denied, the Corps and DAPL would likely turn to the U.S. Supreme Court, but ClearView analysts are not convinced the court would view DAPL’s case differently than the Keystone XL, designed to move crude from Western Canada to the Gulf Coast. The high court reinstated Nationwide Permit 12 for all oil and gas pipelines except Keystone XL. This theory is supported by the case-specific nature of the issue and the fact that there is no guarantee that the appeals of the lower court’s order would succeed, the analysts noted.

Raymond James & Associates Inc. analysts are a bit more optimistic of a positive outcome for DAPL. After consulting with an environmental law expert, the analyst team said the most realistic outcome, with a 70% probability or higher, would be for DAPL to not be granted a stay from the D.C. Circuit, but rather at the Supreme Court.

However, if a stay is not issued, then DAPL likely would begin a three-month shutdown process  and could remain offline for more than a year during an expedited EIS process.

“Given that this would spill into what appears to be a high probability of a Biden administration, the Corps leadership would change somewhat,” Raymond James analysts said. This would open the debate on whether the Corps would grant the water crossing permit after the EIS process or the lower court would “accept” the expedited EIS process as an adequate review.

“In short, we don’t like DAPL’s chances in that scenario — but ultimately view it as the less likely outcome of the two,” Raymond James analysts said.