Natural gas traders generally took cover Thursday until the Energy Information Administration (EIA) released storage figures for the week ending Aug. 14 and they could assess the impact of a modest degree of cooling. 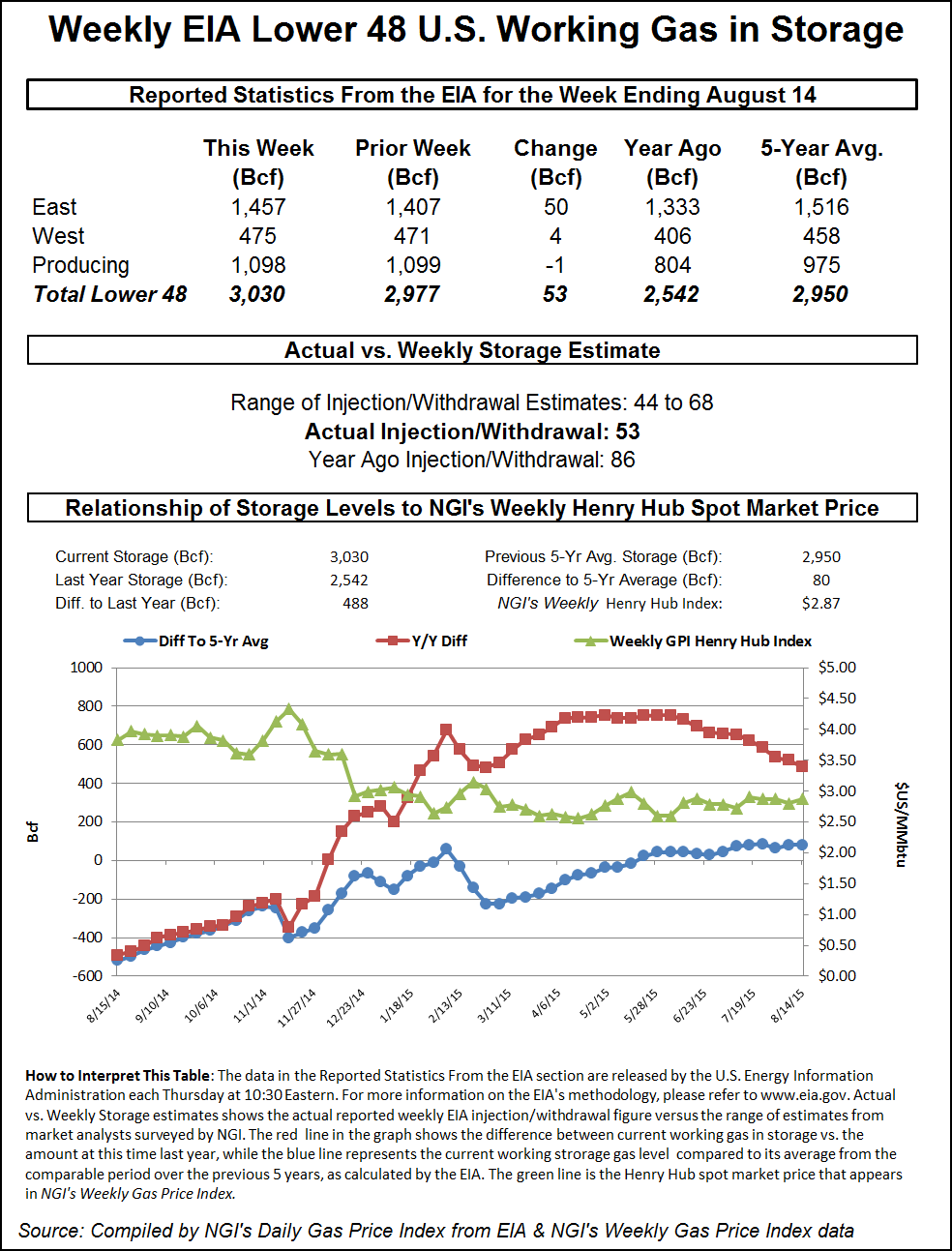 Physical natural gas for Friday delivery overall was lower by a few pennies, but the East managed to gain a few cents. The

Weather trader Bespoke Weather Services is moderately upbeat in its market assessment. “Despite the price reversal in the afternoon, we believe upside may remain in both the short- and long-term within the natural gas market, and we may re-enter the market long if afternoon/evening weather model guidance confirms.

“Similarly, selling may have occurred as traders realized that the bullish inventory miss may have been primarily due to the Alliance Pipeline being down this past week, and not quite as much to a fundamental shift in the supply-demand balance. However…natural gas prices typically bottom in the coming two to three weeks, indicating that while seasonality could cap any large upside in the short term, price strength later in September and into October is quite common for natural gas.

“While seasonality does indicate that we could fall back down to $2.70 or lower, the latest weather forecasts appear to indicate otherwise. GFS ensemble guidance remained quite warm this afternoon, indicating the potential for sustained heat from days 10-16 across the eastern U.S.,” the firm said.

Working gas in storage now stands at 3,030 Bcf as of Aug. 14, according to EIA estimates. Stocks are now 488 Bcf higher than last year at this time and 80 Bcf above the five-year average of 2,950 Bcf. For the week, the East Region added 50 Bcf and the West Region chipped in 4 Bcf, while the Producing Region switched to withdrawals for the second time in three weeks with a 1 Bcf decline.

Season-ending estimates of storage once ran as high as 4.0 Tcf, but recent hot weather and hefty power burns saw those estimates hit the circular file quickly. What might throw current estimates even further askew is if an ongoing hurricane storm headed to the Caribbean ultimately makes its way to the Gulf of Mexico and prompts shut-ins or even physical damage.

“Danny became the first hurricane of the 2015 Atlantic season this week and is on track to bring drenching rain to part of the northern Caribbean islands next week,” said Accuweather.com meteorologist Alex Sosnowski. “Danny follows Ana, Bill and Claudette from earlier this season. None of the first three storms reached hurricane status. The system became a tropical depression on Tuesday morning, a tropical storm on Tuesday afternoon then a hurricane during Thursday morning, local time. Danny will continue to move through generally favorable atmospheric conditions into this weekend, before reaching the Caribbean.”

“Despite the issues with dry air, the system will remain in an overall favorable area for development into the weekend with warm waters and weak wind shear.”

Danny developed a small eye early Thursday morning, which was a sign it was about to go through a strengthening phase. “The small, compact nature of Danny makes it a challenging storm to forecast as it can ramp up and weaken in a matter of hours,” said Accuweather.com meteorologist Dan Kottlowski.

“Danny is forecast to continue to move in a general west-northwest direction through next week, which will take the system across the northern islands of the Caribbean. Occasionally, Danny will jog more to the northwest and other times will push more to the west. Danny is being guided along by the oval-shaped circulation of high pressure over the central Atlantic.”

In its 5 p.m. EDT report, the National Hurricane Center reported Hurricane Danny was located 1,030 miles east of the Leeward Islands. It was up to 80 mph winds and was heading west-northwest at 10 mph.