U.S. energy executives remain wary about the outlook for the oil and natural gas markets this year, and are relying on moderate commodity prices as they finesse their 2021 capital spending plans, according to a recent survey by the Federal Reserve Bank of Dallas. 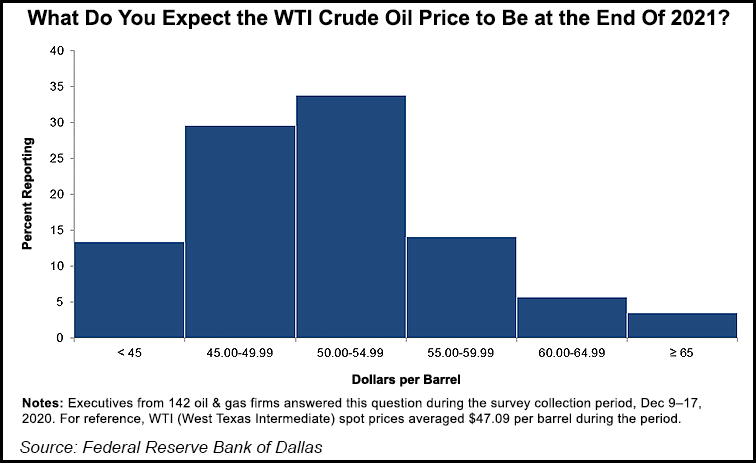 The Dallas Fed, as it is better known, every quarter surveys executives of exploration and production (E&P) firms and oilfield services (OFS) companies headquartered in the Eleventh District. The district encompasses northern Louisiana, most of New Mexico and Texas, home to the Permian Basin, Eagle Ford and Haynesville shales.

“The latest survey results show some signs of improvement in the oil and gas sector,” said Dallas Fed’s Michael Plante, senior research economist. “Business activity levels rose for the first time in a year, and firms became more optimistic about the outlook. Employment-related indicators fell again this quarter but at a more moderate pace than in previous quarters.”

Dallas Fed economists said more firms expect to increase their capital spending this year rather than decrease it this year.

Most respondents are using $45 West Texas Intermediate oil prices for their budget planning, “a little below the average for December,” economists said.

Executives said they were taking into account the uncertain impact of Covid-19, as well as the potential agenda of the incoming Biden administration. Based on preliminary results from the two Senate runoff races held Tuesday in Georgia, Democrats will be in control of the White House, Senate and House as President-elect Biden takes office on Jan. 20.

One executive in comments to the survey said “the uncertainty with the economy is worrisome.” However, the firm’s “ability to push through the downturn (i.e., survive) is allowing this small independent E&P to consummate three acquisitions from reluctant and/or difficult partners. Our activity in 2021 will increase significantly as a result.

“Lack of money and/or financial support makes it very difficult for small companies to move operations forward. We are looking forward to the new year and a more responsible administration in Washington.”

Said another, “While the Trump administration gave a big shot in the arm to the industry regarding access and easing up on restrictions, I think the Biden administration will actually help increase commodity prices by reversing that trend.”

More of the respondents expect their firm’s capital spending to increase this year. Thirty-five percent foresee capital expenditures (capex) slightly increasing, while an additional 14% anticipate a “significant increase,” the survey noted. Another 23% see capex at near 2020 levels.

Meanwhile, a near equal number of executives said 2021 capex would be slightly down (15%) or significantly lower (14%).

The business activity index, the main driver of the Dallas Fed energy survey, “moved into positive territory to 18.5” in 4Q2020, driven by both E&P and OFS firms.

“According to E&P executives, oil production stabilized after three quarters of decline, and capital spending increased,” economists said. Among the OFS firms, the equipment utilization index also “pushed into positive territory, jumping 25 points to 6.4” in the final three months.

“Six-month outlooks improved notably,” with the index rising from 1.9 in 3Q2020 to 21.6. “This is a stark recovery from the significantly negative readings in first and second quarter 2020.”

The Dallas Fed also asked about the recent wave of consolidation, particularly among E&Ps. Most respondents think the sector will continue to downsize through 2022 from the 60 or so publicly listed independent E&Ps now in the United States.

One executive said “E&P and supplier consolidation needs to increase to reduce substantial costs from the system. Suppliers continue to pass savings to operators from their internal cost cutting and debt reduction efforts.”

Queried about plans for reducing carbon dioxide (CO2) emissions, one-half of the larger firms that responded “reported having plans to reduce CO2 and methane emissions, while over 60% plan to reduce flaring,” Plante said. “Some smaller firms have these plans as well, but we find they are not as widespread.”

A big chunk (70%) of executives also expect to have access to capital from “nonbank sources” through the end of the year. In addition, OFS firms expect to generate more revenue from services related to alternative energy over the next five years.