Investment by U.S. oil and gas producers is likely to drop by at least 35% in the second quarter versus the first quarter of this year due to the crushing impact of Covid-19 on crude prices and a lack of available storage capacity, the Federal Reserve Bank of Dallas said Friday. 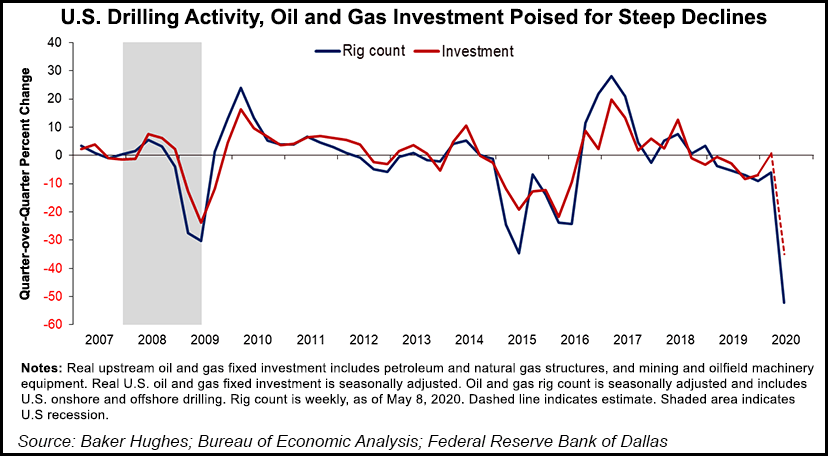 Dallas Fed economists Garrett Golding, Martin Stuermer and Jesse Thompson said the sequential decline is likely to be sharper than the plunge seen in 1Q2016, the last time a comparable collapse in WTI pricing occurred, and also steeper than any reductions seen during the 1986 oil crash.

“Due to the Covid-19 pandemic and an oil-supply surge from Saudi Arabia, the benchmark West Texas Intermediate (WTI) crude oil price dropped from $50-$55/bbl in February to the $20s in late March,” the economists said. “This is far below the $46 to $52 that companies on average need to profitably drill new wells, according to the Dallas Fed Energy Survey.”

They added that while hedging “allows some firms more breathing room during low-price periods, the overall impact to revenue for many firms is shattering.”

In addition to the unfavorable wellhead economics, producers also are being forced to shut in existing production due to scarce crude storage capacity, the authors said.

For 2020, the Dallas Fed is forecasting year/year investment declines ranging from 20% among larger firms to nearly 100% by smaller ones, translating to a total decline of about 40%, with the most severe impacts felt in 2Q2020.

Citing comments from operators, the Dallas Fed economists said that some producers could ramp up investment later this year if WTI prices return to above $30.

“Oil and gas investment in the second half of 2020 will depend on price expectations, global storage capacity and market conditions,” the economists said. “Industry contacts stress that the trajectory of the pandemic and its implications for global oil consumption will influence firms’ planning. Most report a very uncertain outlook.”

The authors also noted that before the pandemic hit, investors already had become wary of the exploration and production segment as many Lower 48 operators “faced an inability to produce attractive returns amid heavy debt burdens and an oversupplied oil market,” and that firms already had planned to cut annual capital expenditures (capex) by 10-15% in 2020 versus 2019.

In related news, the American Petroleum Institute said Thursday that domestic oil production fell by a staggering 900,000 b/d in April compared to March, “which combined with reductions in natural gas and other liquids output, amounted to the largest monthly decline in U.S. total liquids supply on record.”

EIA also said this week it expects U.S. marketed natural gas production to drop by 5% in 2020 due to the economic impacts of Covid-19, while IEA said it expects global natural gas demand to drop by the same percentage, and for largely the same reasons.