Oil and natural gas executives working in northern Louisiana, southern New Mexico and across the state of Texas are optimistic that commodity prices will continue to climb this year, along with activity, according to a survey by the Federal Reserve Bank of Dallas. 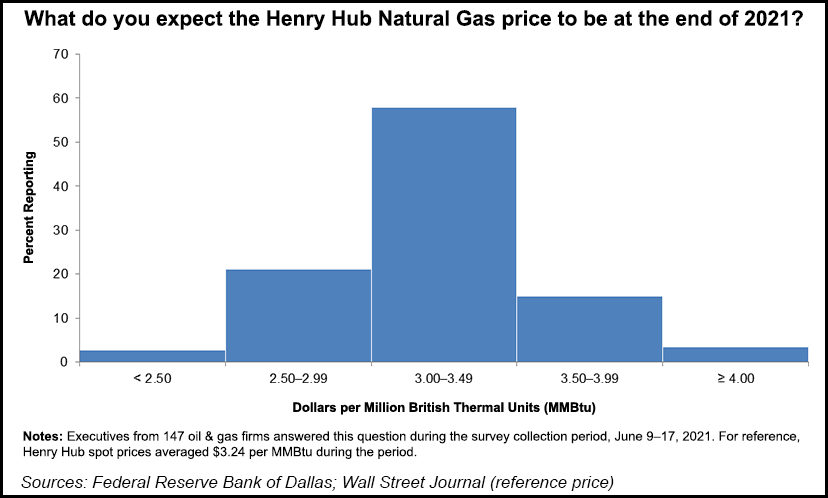 The Dallas Fed, as it is better known, on Wednesday issued its second quarter survey based on responses of 152 energy firms headquartered in the Eleventh District. Data was collected June 9-17. Of the 152 firms responding, 101 were exploration and production (E&P) firms and 51 were oilfield services (OFS) firms.

“Six-month outlooks improved notably, with the index moving up from 70.6 last quarter to 71.9 — the highest reading in the survey’s five-year history,” according to researchers. “While uncertainty continued to decline, the aggregate index increased three points to minus 19.6.”

Capital expenditures (capex) accelerated among E&P firms, the survey found, rising from the first quarter to 42.4 from 31.0. In addition, capex looks to increase in 2022, respondents said. The index for the expected level of capex in 2022 came in at 53.0, up from 49.5 in the first quarter.

Notably, costs also are rising. For OFS firms, the index for input costs jumped sequentially to 56.1 from 36.0.

The increase was “a record high and suggestive of significant cost pressures,” according to the Dallas Fed researchers. “No oilfield services firms reported a decrease in input costs this quarter.”

The survey of E&P executives found that the index for finding and development costs soared from the first quarter to 28.3 from 3.9. Lease operating expenses also increased to 23.4 from minus 5.9.

OFS activity remained positive across the board, the survey found. The equipment utilization index was in the black, although it slipped to 42.0 from 63.2 in the first quarter. Operating margins improved, though, with the index climbing to 22.5 from 14.0. The index for prices received for services also rose sequentially, up by one-third to 30.0 from 20.0.

Meanwhile, the aggregate employment index posted a second consecutive positive reading, edging up to 9.9 from 1Q2021’s 8.4.

“Employment growth continues to be driven primarily by oilfield services firms,” researchers said. “The employment index was 25.5 for services firms versus 2.0 for E&P firms.” The aggregate employee hours index improved to 24.0 from 22.8, while the index for aggregate wages and benefits increased to 20.6 from 14.8.

Every quarter, the Dallas Fed also poses a series of questions. Queried about expectations for a global oil supply gap, 76% expect it to happen in the next two to four years.

“A cooperative approach, bringing incentives to all industries to ‘green up’ a bit, is an approach that most would approve,” one E&P executive said in response to the survey. “All modeling shows natural gas and oil play an important part in any future energy supply for the country and for the world. Our industry should be partners in the ‘greening’ process and be encouraged rather than bashed at all opportunities.”

Another E&P executive said, “What a great way to absolutely cripple the U.S. oil and gas industry. Question: How many of our economic competitor nations around the world will willingly shoot themselves in the foot with a carbon tax like this and yet, simultaneously, try to compete against China, India and Russia? Are they going to do this to themselves? You know the answer is no.”