Oil and gas operators in Texas, southern New Mexico and northern Louisiana continued to “git ‘er done” during the first three months of this year, with energy activity stronger for the second consecutive quarter, the Federal Reserve Bank of Dallas said Wednesday. 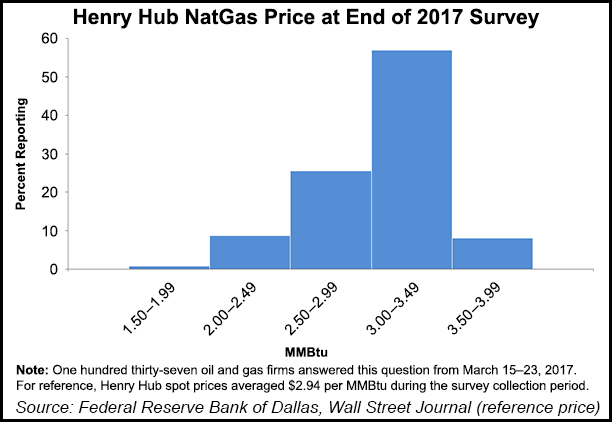 Data were collected March 15-23, with 153 energy firms responding, including 78 exploration and production (E&P) firms and 75 oilfield services (OFS) operators. The Eleventh District covers Texas, southern New Mexico and northern Louisiana. The 1Q2017 survey included an annual update to data on breakeven prices by basin, new information on OFS costs and comments on the outlook for the Permian Basin.

“We’re very positive about the direction we’re heading from a regulatory aspect, from a business-friendly environment,” one E&P executive said. “We do see some bumps along the way with oil prices. While we believe we’ll be higher by year-end, prices still could see some short-term downside. Increased demand, possible tensions overseas and increased liquefied natural gas exports could help prices. Overall, we believe things are headed in the right direction.”

OFS equipment utilization for a region that includes the mighty Permian Basin increased quarter/quarter, but at a slower pace, with the corresponding index at 26.0, down from 35.9. However, the index of prices received for OFS jumped to 18.3 from 6.8.

“Too many rigs have gone back to work,” an OFS respondent said. “Capital investment is driving drilling decisions rather than profitability. Price recovery is too fragile and the rig count increase is an illogical response to slightly improved prices. The market has not signaled that such a return to high activity levels is justified; therefore I can easily envision a price slump headed our way and the bottom of that cycle looks increasingly low.”

Executives responding reported mostly “stable or rising wages and benefits, with the aggregate index at 17.1. Other labor market measures were somewhat mixed, however,” positive for OFS operators but slightly negative for E&Ps.

Said an OFS executive, “While business has improved, we are still facing various headwinds. Oil falling below $50/bbl has worsened many customers’ capital expenditure forecasts. They react quickly to shifting prices. In addition, we are now having trouble finding experienced personnel, so we are having to raise wages to recruit those individuals. In many cases, we cannot offset these wage increases with rate increases, so our margins get compressed.

“Working capital is being consumed by swelling accounts receivable balances and reactivation capital expenditures/expenses. We need steady oil prices or we will be forced to raise capital in other ways. This lack of liquidity is our biggest concern.”

Although there are worries about too many rigs going back to work and not enough personnel, the survey found that the six-month outlook improved from the fourth quarter, especially for the OFS sector.

Nearly 70% of OFS firms reported an improved outlook, while 50% of the E&Ps see an improving outlook ahead. Capital expenditures continued to increase in 1Q2017, and most E&Ps “upped their expectations of 2018 capital spending.”

Beginning with the 1Q2017 survey, the Dallas Fed plans to report oil and gas executive price forecasts as well as changes in the uncertainty facing company outlooks.

Henry Hub gas prices on average now are expected to end the year at $2.95/MMBtu, the respondents told the Dallas Fed. West Texas Intermediate (WTI) oil prices are expected to climb to $53.49/bbl by year’s end despite recent price declines, with responses ranging from $30-65/bbl.

“Being a service company to the oil and gas industry, our biggest issue is trying to pass on to customers the price increases we are getting from our material suppliers, mainly line pipe,” said an OFS executive. “Our cost for line pipe has increased by 30% since October 2016. There is a great deal of uncertainty in line pipe pricing globally, which of course includes the United States.”