The controversial and closely monitored $6.78 billion Dakota Access Pipeline (DAPL) likely will not reach its full 470,000 b/d capacity until next year, according to ESAI Energy LLC. 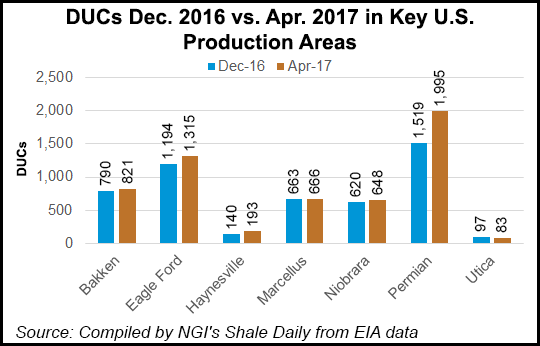 Flows began in March from the North Dakota-based pipeline but they were not expected to reach a market hub in south-central Illinois until mid-May.

In its North American Watch issued last week, ESAI said DAPL would be at about 75% of maximum capacity at the end of this year. The nearly 1,200-mile, four-state pipeline is expected to take time to ramp up as Bakken Shale production in North Dakota slowly increases.

“Production growth in the Bakken is starting to take hold as rig activity increases and more wells are completed in the second half of this year,” ESAI analyst Elisabeth Murphy said. “Production is forecast to reach 1.1 million b/d by year-end 2017, about 130,00 b/d higher than at the start of this year.”

The North Dakota Department of Mineral Resources, which includes the Oil and Natural Gas Division, agrees with the assessment, a spokesperson for Director Lynn Helms told NGI’s Shale Daily.

ESAI projected that production growth in the Bakken “will strengthen in 2018,” pushing DAPL to its full capacity by displacing more volumes carried to the East Coast via rail. More drilled but uncompleted (DUC) wells also are expected to be completed.

“Until oil prices get closer to $60/bbl, producers will continue to target the Bakken core where well performance is very high,” Murphy said. “We also expect a further draw-down in the ”drilled-but-uncompleted’ inventory for the rest of 2017 since most DUCs provide adequate rates of return at prices around $50/bbl.”