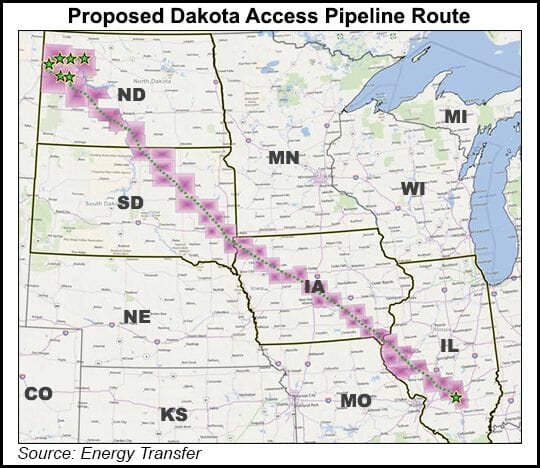 The operator of the Dakota Access (DAPL) pipeline on Thursday filed in the U.S. Court of Appeals for the D.C. Circuit an appeal for review of a district court’s order denying a stay request.

Dallas-based Energy Transfer LP (ET) filed the appeal minutes after D.C. District Court Judge James Boasberg denied the stay request, which ET was seeking while it appealed the judge’s order earlier in the week vacating the permits for DAPL to cross under Lake Oahe via a right-of-way administered by the U.S. Army Corps of Engineers. In that order, the judge also instructed ET to temporarily shut down and empty the 570,000 b/d crude oil pipeline by Aug. 5 and remain shut while an environmental impact statement on the project, already in service for three years, is completed.

In denying the request for stay, Boasberg said he was willing to consider a modification to the logistics and timing of the pipeline shutdown and emptying, and the Native American Tribes led by the Standing Rock Sioux also indicated their willingness to negotiate with DAPL. The pipeline had contended the shutdown would take 86-101 days to safely shut down the pipeline.

DAPL, “mindful of the running clock, told the Court that it preferred an immediate ruling denying the motion to stay if the Court was only waiting to try to resolve the logistical and timing issues, rather than the merits,” stated the judge’s order. Nevertheless, Boasberg said he remains “willing to assist in mediating (or ultimately deciding) any dispute regarding such logistical and timing issues if jurisdictionally permitted to do so.”

ClearView Energy Partners LLC analysts believe it is possible that the D.C. Circuit could temporarily stay Boasberg’s order within days to stop the clock. However, such a temporary stay would endure only while briefing takes place on the motion for stay pending review.

“Whether a stay would be granted through the entirety of the D.C. Circuit’s review would be the subject of an order issued after the matter is briefed,” ClearView said. “We would view a temporary stay as procedural and not necessarily indicative of positive prospects for a longer stay.”

DAPL’s potential shutdown, seen lasting until April when the EIS is expected to be complete, could have devastating effects on Bakken producers and mistreamers alike, as the pipeline provides straight-shot, low-cost access to the Patoka, IL, hub, and, from there on the Energy Transfer Crude Oil Pipeline (ETCOP) to Nederland, TX, an easy path to Gulf Coast refinery and export markets, according to RBN Energy LLC.

From early 2017 to early 2020, production soared to more than 1.4 million b/d, spurred at least in part by the end of pipeline takeaway constraints in June 2017 with the start-up of DAPL. This spring, though, Bakken producers slammed the brakes, slashing their crude output to less than 1 MMb/d for the first time in almost three years.

“We understand that many of these same producers were making plans to restart their shut-in wells this summer” when Boasberg issued his “stunning decision,” said RBN analyst Housley Carr. “This is no trifling matter.”

To be sure, in late 2014, well before DAPL began operations, more than two-thirds of the Bakken’s then 1.2-million b/d of production was moved by rail, according to RBN. When DAPL came online in June 2017, crude-by-rail volumes plummeted to less than 150,000 b/d, mostly to serve refinery customers on the East and West coasts, though they later rebounded to about 300,000 b/d as Bakken production continued to rise, the firm said.

If the court-ordered shutdown of DAPL by Aug. 5 is not put on hold by the U.S. Court of Appeals for the District of Columbia Circuit, RBN said the sudden fall-off in pipeline takeaway capacity would need to be mitigated in three ways. First, any available capacity on other pipelines out of the Bakken would need to be utilized. Second, the volume of crude being transported by rail would need to ramp up, and third, producers’ plans to restart wells that are now shut-in would need to be suspended, with further production cuts a possibility.

Nevertheless, RBN said there’s a good chance those mitigation efforts wouldn’t be enough. At best, the available capacity on the Bakken’s non-DAPL takeaway pipelines and the incremental crude-by-rail capacity there would add up to 300,000-400,000 b/d, which is likely less than even the Covid-19-impacted flows on DAPL, according to the firm.

There’s also no guarantee that all the gathered Bakken crude currently flowing into DAPL can access the takeaway pipelines or crude-by-rail terminals with available capacity, it said.

“In any case, all this may well require that Bakken producers maintain their current, lower production levels or even implement further curtailments to bring the shale play’s production into close alignment with the Bakken’s takeaway capacity in a world without DAPL,” Carr said.