PennEast Pipeline Co. LLC said its binding open season for a proposed pipeline to transport 1 Bcf/d of gas to Northeast markets resulted in 965,000 Dth/d of bids. 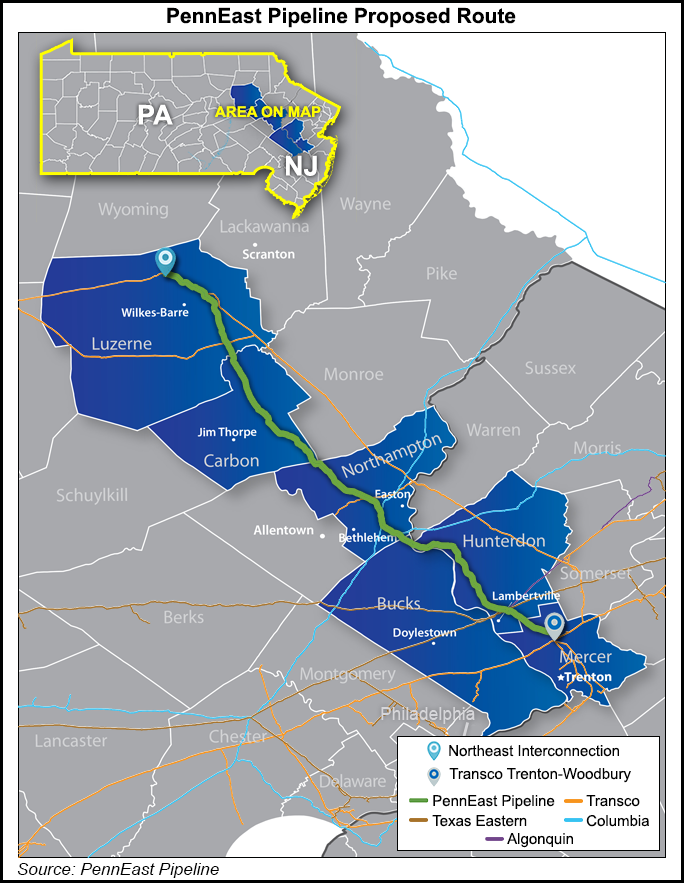 “The PennEast Pipeline is a critical step to bringing low-cost Marcellus Shale gas to Pennsylvania and New Jersey utility customers and other mid-Atlantic downstream markets,” said PennEast Chairman Peter Terranova. PennEast said it continues to receive inquiries from prospective shippers and expects to finalize all agreements this month.

The 100-mile PennEast would begin in Luzerne County in northeastern Pennsylvania and end at Transco’s Trenton-Woodbury interconnection in New Jersey. An existing power plant and several delivery points in Pennsylvania and New Jersey are being considered along the proposed route.

“This project demonstrates willingness by utilities and other downstream entities, including electric generators, to contract for direct access to prolific Marcellus Shale gas,” said Terranova. “The combination of the number of foundation shippers, the number of delivery points and diversity of supply makes the PennEast Pipeline a very attractive project, especially compared to other proposed projects in this region.”

In its latest “Interstate Pipeline Review,” U.S. Capital Advisors analysts wrote that it “used to be the bulk of pipelines were driven by market pull and as such, utilities represented the majority of the customer base. With producers anxious to ensure volumes have a home and more producers looking at midstream [master limited partnerships], the pipelines’ customer mix is increasingly [exploration and production] base and thus, lower credit quality.”

PennEast has competition in a proposed project from Williams Partners LP, a 1 Bcf/d expansion of its Transco pipeline — the Diamond East Project — which would take Marcellus gas to the Northeast (see Daily GPI, Aug. 26). “…[T]there’s presumably market growth behind that [PennEast project],’ Rory Miller, senior vice president of Williams Atlantic-Gulf operating area, told NGI’s Shale Daily recently. “But again, there’s producer interest in getting out of the basin to consuming markets, so we’re actually going to be courting both the LDCs and the producers at the same time,” he said of Diamond East.