North American oilfield services activity in the first three months of this year has been less promising than expected, according to Schlumberger Ltd. CEO Paal Kibsgaard. 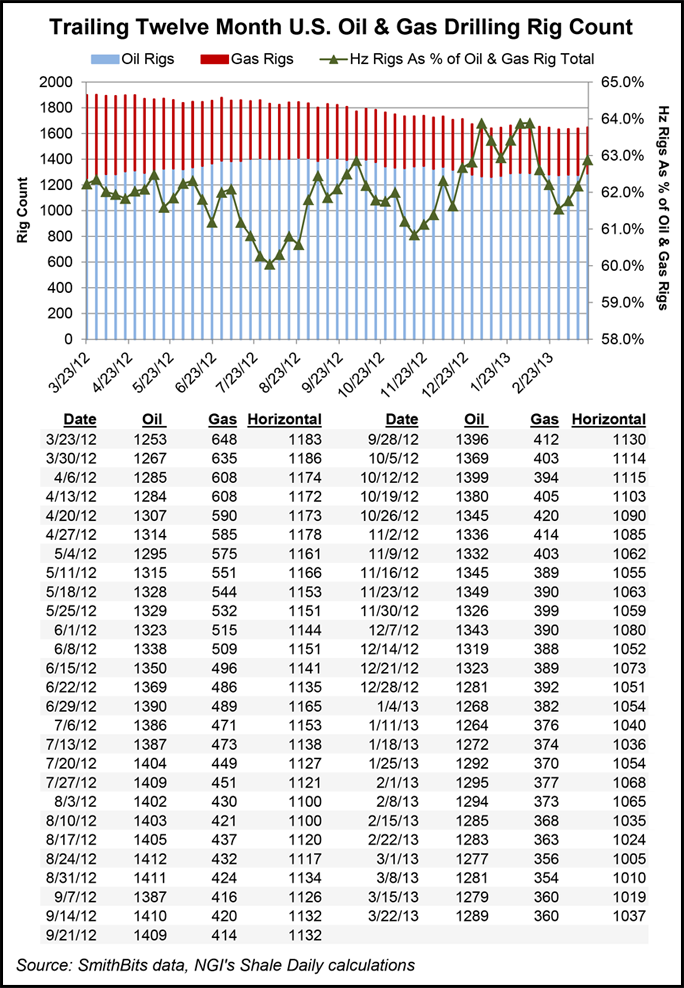 Schlumberger hadn’t expected to see barn-burning business this year. Kibsgaard in January had warned that this year the North American onshore would be slow because of an oversupply of hydraulic fracturing equipment and related supplies, including guar gum (see Shale Daily, Jan. 23). The operator had an 8% sequential drop in U.S. land in 4Q2012 from 3Q2012, which impacted margins.

“Asset utilization has recovered from the holiday slowdown,” Kibsgaard told the audience. “Drilling efficiency is strong and lower guar costs will provide some relief, but none of these factors are changing the fundamental issue, which is still pricing.”

Schlumberger continues to see “negative pricing pressure in many product lines in the first quarter, with active participation from our principal competitors, reinforcing the somewhat unclear outlook for the North America land market at this stage.”

Based on the global economic outlook, “supply and demand in the oil market in 2013 are expected to be similar to what we saw last year,” said the CEO. “Demand is forecast to increase by around 1%, or about 900,000 boe/d,” mostly driven by emerging economies. “On the supply side, the continuing surge in North American output from light tight oil will by itself be almost equal to the global demand increase.”

The global oil market “is expected to remain tight and this will continue to support oil prices in the band that we have now seen since 2011…The North American gas market offers a very different picture.”

Even though producers have reduced their activity in dry gas basins, “U.S. gas production has continued to grow and is now 25% higher than five years ago, driven largely by higher demand from the power producers. The fact that electricity generation can relatively easily switch back to coal if natural gas prices rise significantly will likely cap both prices and dry gas-related drilling activity in the short term, unless there is an unexpected softening of existing production levels.”

Down the road, he said, “primary energy demand will continue to grow throughout the current decade, driven by continuing growth in the developing countries with Asia-Pacific representing the largest share of the increase. To meet this demand, unconventional and deepwater resources will continue to gain importance.”

North America is and will continue to remain the “center of activity, with light tight oil being the primary objective. In the international unconventional plays, the short-term focus will still be on pilot projects but activity and production will likely start to become more meaningful in the second half of this decade.”

Capital and operation expenses are forecast to “grow steadily throughout the decade driven by exploration, new developments and higher investments to offset mature production decline. In this environment, our customers are likely to further elevate their focus on reducing finding, development and lifting costs. We believe this will lead them to reassess how they can better utilize the capabilities of the leading service companies.”

In the past 10 years, Kibsgaard said, “the prevailing operator approach toward the service industry has been procurement-driven, engaging a multitude of fragmented providers and generally selecting suppliers based on the lowest price. We expect this direction, which puts the entire integration responsibility on the exploration and production companies [E&P] and rarely delivers the lowest total cost, to gradually be replaced by a more progressive approach targeting a completely new level of system optimization and integration that unlocks significant trapped value in the currently sub-optimized E&P value chain…

“We are already seeing an emerging trend where our key customers are seeking much closer partnerships with us. This includes more collaborative problem solving utilizing our complementary expertise and further leveraging our wide technology offering, integration capabilities, and global footprint. We expect this trend to strengthen in the coming years favoring broad integrators like Schlumberger over players with narrower offerings, technical capabilities and geographical reach.”

Trefis analysts said North American activity has been “sluggish for some time” because of low natural gas prices. Gas-directed activity has plunged from about 663 active rigs to about 431 in the past year, they said.

“While the oil rig count has shown some growth, it hasn’t been enough to offset the gas drilling plunge…Pricing also has come under pressure due to lower demand and a higher supply of equipment used for gas drilling.”

The slump in business may impact Schlumberger’s 1Q2013 earnings, but the Trefis team believes “it could have a more pronounced impact on the other two large oil service firms Baker Hughes and Halliburton. While Schlumberger derives roughly a third of its revenues from the North American market, Baker Hughes and Halliburton depend on the region for more than half their business.”

Tudor, Pickering, Holt & Co. Inc.’s (TPH) team said the best source for forecasting this year’s outlook is from the drillers themselves. And it’s not an encouraging report, at least for the onshore. Land driller Patterson-UTI Energy Inc. “guided that its U.S. land rig count average would decline from 198 rigs in 4Q2012 to 190 rigs in 1Q2013,” down about 4% quarter/quarter.

Meanwhile, Helmerich & Payne Inc. (H&P) data indicates that its idle rig count has gone from 54 rigs at the end of 2012 to 53 rigs at the end of January, according to TPH. However, at the end of February H&P had 56 rigs in operation. Nabors Industries Ltd. averaged 173 rigs in the Lower 48 states in 4Q2012, said the analysts.

As to where the rig count may be headed, the TPH analysts said the bias “is directionally higher versus the current level, given continued healthy crude oil prices and the natural gas-oriented rig count having finally bottomed…” However, a “key issue remains” about the timing and magnitude of the U.S. rig count recovery. Analysts said they hadn’t seen nor heard evidence “that warrants changing our view that the rig count starts to trend higher in 2Q2013.” They are modeling an average of 40 more rigs, or up 2% from 1Q2013, but on average about 60 fewer rigs for the year than in 2012.