New York Gov. Andrew Cuomo criticized groups that support high-volume hydraulic fracturing (HVHF) in the Empire State for focusing on “hallway chatter” and said he doesn’t think two bills calling for a two-year moratorium on the practice will pass the legislature. 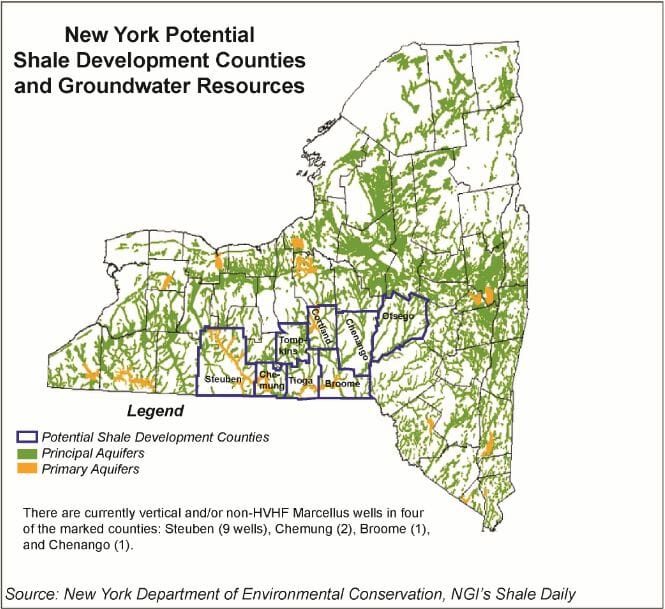 In an interview Monday, Cuomo repeated that he would make a decision on whether to allow HVHF based on “facts and science,” but he said groups that support the practice weren’t using their time wisely.

“I think the landowners’ consultants and the lobbyists for the pro-fracking groups would be better advised to spend their time actually getting out information to allay the fears of the people of this state than worrying about hallway chatter,” Cuomo told the Albany bureau of Gannett Co. Inc. “Their job is to communicate to the people of the state, to say that this is a safe process, to be open and available. And that’s what they should be doing.”

Jim Smith, spokesman for the Independent Oil & Gas Association of New York (IOGA), told NGI’s Shale Daily that the organization — which was in Albany on Tuesday with more than 100 meetings scheduled — rejected Cuomo’s comments.

“IOGA has been actively educating New Yorkers for four-and-a-half years,” Smith said Tuesday. “We have been as active as we can be, given the commitments that our members have to their jobs. And right now more of their time is being spent in Pennsylvania and Ohio to work, so that puts a crutch on any leftover time that they might have to advocate on behalf of the association.”

“[Landowner groups] have done more to educate landowners than any other organization in New York,” Kurkoski told NGI’s Shale Daily on Tuesday. But he added that many groups have disbanded because of a lack of funding. “People in New York are so discouraged about the lack of movement by the state that funding has dried up and, frankly, interest has dried up by some landowners.

“We hold educational meetings these days, and a fraction of the people come compared to those that came before. And I think that’s happening because now people doubt New York will ever do anything.”

Cuomo acknowledged that he had discussed HVHF with Robert F. Kennedy Jr. — his former brother-in-law and an avid environmentalist — but denied those discussions scuttled an alleged plan to start a trial drilling program in the state (see Shale Daily, March 5).

“It’s relatively simple at the end of the day,” Cuomo said, adding that state Department of Health (DOH) Commissioner Nirav Shah “is going to give his opinion after reviewing the facts. We’re not going to do it without him reviewing it. It’s that simple and it’s that obvious, frankly.”

But on Monday, Shah reportedly said he never intended to wait for the three studies to be completed, a process that could take several years, before submitting his recommendations.

“I anticipate we will be done in the next few weeks,” Shah said at a press conference with Cuomo on Monday, according to the Associated Press. He added that he had met with researchers from the EPA and Geisinger over the last two weeks.

“Nobody ever said that we were waiting for the [three] studies to be finished,” Cuomo said at the press conference. “The DOH was going to be looking at those studies and see if there was anything constructive in those studies.”

Kurkoski said he was skeptical of Shah’s comments. “What we heard yesterday is what we heard a month ago, a year ago, two years ago,” he said. “It’s always the same, and there doesn’t seem to be anything that’s happening to getting us closer to resolving this issue.

“What’s really strange is that Commissioner Shah’s letter said he would have his report done within a few weeks. Well, that was a few weeks ago. And yesterday he said the same thing. There’s absolutely nothing new.”

On March 6, the Democrat-controlled Assembly passed a bill, A5424, calling for a two-year moratorium on HVHF and other measures (see Shale Daily, March 7). The Assembly vote came one day after two state Senators introduced bill S4046, which also calls for a two-year moratorium but also orders the state to refrain from issuing permits until the EPA, Geisinger and University of Pennsylvania studies are completed (see Shale Daily, March 8). Both bills are before the Senate Environmental Conservation Committee.

Democrats outnumber Republicans in the Senate 33-30, but the GOP controls the chamber with a bloc of five dissident Democrats — the Independent Democratic Caucus (IDC) — through a power-sharing deal formed after the 2012 election. Sen. Simcha Felder (D-Brooklyn) also caucuses with the Republicans, giving the bipartisan coalition a 36-27 edge over the Democrats.

Two IDC members, Sens. David Carlucci (D-Rockland) and Diane Savino (D-Brooklyn) introduced S4046. Senate Republicans, many of whom are stalwart supporters of HVHF, are determined to defeat both bills by not bringing them up for a floor vote.

“I don’t believe that bill passes,” Cuomo said of S4046. “We’re not looking for a political resolution here.”

Smith said IOGA was hopeful that both bills would ultimately fail. “They should fail because they jeopardize much more of the existing industry than I think the sponsors had anticipated,” he said.