Florida-based CSX Corp. senior executives on Wednesday underscored the continuing growth in the amount of crude oil being shipped by rail and voiced concerns about proposed federal regulations that would drop average train speeds in response to a series of tank car accidents in the past 18 months (see Shale Daily, Aug. 22, 2013). 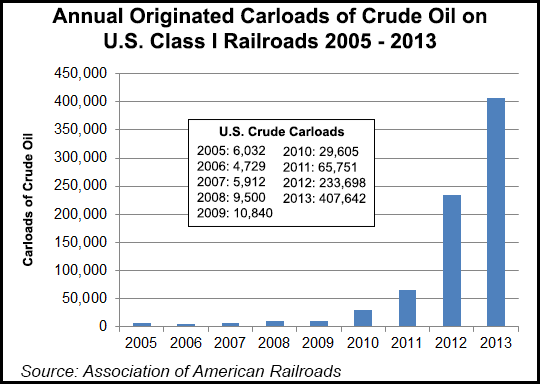 “The biggest part of our surge [in business] on our northern network was driven by crude-by-rail and our coal business,” Gooden said. “Our coal business was much higher than expected primarily as a result of [high] gas prices, a colder winter and utility responses.”

Gooden said he sees future crude shipment expansions along the East Coast. “There are expansions there going on as we speak,” he said. “They are predominantly in the Philadelphia and New Jersey areas; we have two customers that are looking at expanding in the Jersey area.”

Every week, CSX is averaging about 2,014 oil tank cars and 20 trains with crude-by-rail, Gooden said. “We could see some slight increases in that going forward, although there are some finite limits for what the Bakken [Shale] can produce and the refiners can process.”

On the question of proposed new federal rail regulations from the Pipeline and Hazardous Materials Safety Administration (PHMSA), Ward said the industry is concerned about a proposed requirement to slow trains to 30 mph. In the longer term, he expects regulators to heed the industry’s warning about that proposed rule.

“While we have not seen the proposals, we have heard that a 30 mph speed limitation is one of the options being considered, and we think that would severely limit our ability to provide freight service to our customers, and also provide passenger and commuter services,” Ward said. “There are all kinds of corollary impacts of this.

“I would hope as we look at this with the federal government that we can show the modeling of how disastrous that could be for fluidity of the entire U.S. rail system as well as the impact on [long-haul] trucking. We think cooler heads will ultimately prevail” among federal regulators.

Other parts of the proposed federal rulemaking due to recent crude rail car derailments have the full support of the CSX executives, such as the proposed crude rail tank car designs (see Shale Daily, May 7).

“We’re quite excited about the potential for the new car design as well as the retrofits to the existing cars, and that is part of the proposed rulemaking [at PHMSA],” said Ward, adding that CSX has “done a number of things” to improve safety. “We think the next big thing to make things better is a stronger car for newbuilds as well as the retrofit to existing cars.”