Data centers used to mine cryptocurrency such as Bitcoin are proving an attractive option to mitigate natural gas flaring in North Dakota, the state’s top oil and gas regulator said Wednesday. 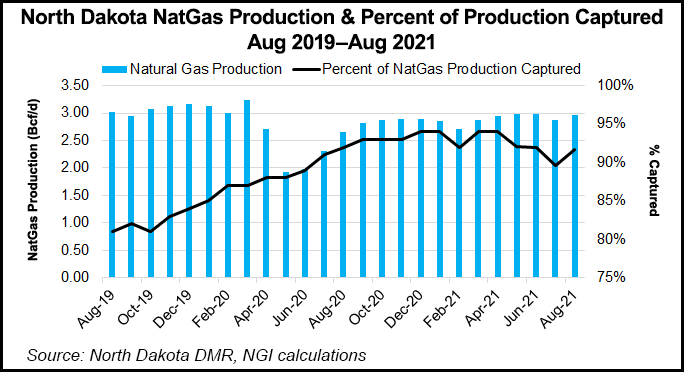 The energy-intensive process of solving cryptographic puzzles to verify transactions on the distributed network known as the blockchain requires a round-the-clock source of reliable power. Miners have increasingly been turning to gas-fired generating units set up directly on the well pad, using gas production that would otherwise be flared off or shut in by operators.

Director Lynn Helms of the Department of Mineral Resources (DMR) discussed the trend during a press briefing last Wednesday on North Dakota production and drilling data for August.

Curbing flaring of associated gas tied to oil production has been a recurring challenge in the Bakken Shale of North Dakota and Montana because of limited gas takeaway capacity However, increasingly strict flaring regulations combined with high gas prices mean that operators now have more incentive than ever to capture as much gas as possible, said Helms.

“The flare mitigation that we’re hearing the most about is gas-to-grid, and then gas…to data centers,” Helms said. “Both of those are very scalable and there are technology providers, service providers, that are ready to deploy those technologies in the field and they’re working and talking with some of our operators…”

Helms also cited opportunities in areas such as Charlson, ND, which suffers from gas pipeline bottlenecks but which has easy access to the power grid. This means operators “can move some of that flared gas into electric generation and put that on the grid, which is needed in McKenzie County.”

North Dakota’s gas capture rate rose to 92% in August from 90% in February, Helms said. He predicted that over the first half of 2022, “we’ll start to see some strengthening and additional flare mitigation technologies deployed.”

The bullish gas market has improved the outlook for traditional gas gathering infrastructure as well, he noted.

“There is absolutely no financial incentive for anyone to flare at this point,” Helms said. As a result, the “traditional gas gathering and processing and exporting companies are able to capitalize their projects more readily, so we’re beginning to hear discussions about the next round of expansion projects.”

North Dakota’s drilling rig count stood at 30 as of Wednesday, according to DMR. The state’s rig count fell 51% from January 2020 to last August, but is now slowly increasing, Helms highlighted.

He also noted plans by the Organization of the Petroleum Exporting Countries and its allies, aka OPEC-plus, to phase out 5.8 million b/d of oil production cuts by September 2022 as oil prices have hit a two-year high.

Helms said “$80 WTI is definitely strong enough to shift capital to the Bakken, especially with the well performance that we’re seeing…I think the concern on the part of industry as well as myself is, what is OPEC-plus going to do, and what is Covid-19 going to do here in October, November, December.”

Over the coming months, Helms said OPEC-plus is likely to opt for preserving market share over boosting prices.

“We are anticipating that because our shale developers are planning a surge in capital spending and drilling next year that OPEC-plus is likely to open the taps the next time they meet and give the world a larger volume out of their roughly 5 million b/d surplus that they have, so I’m really expecting around year-end and through the first quarter…some softening of oil prices.”