Russia’s war in Ukraine threatens global crude supplies, but a resurgence of the coronavirus in China is curbing demand as the United States and other countries prepare to release oil from strategic reserves. The result: volatile prices. 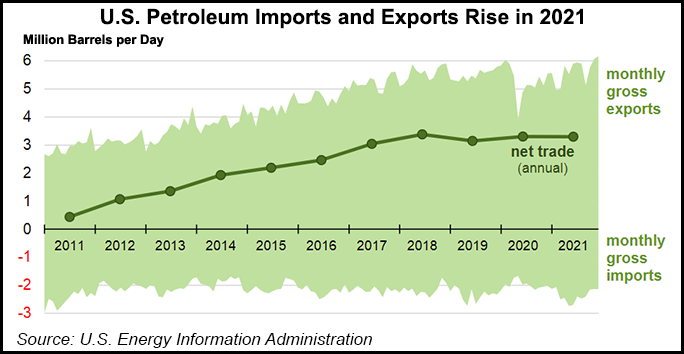 Brent crude prices on Tuesday climbed more than 6% to about $104/bbl intraday following OPEC Secretary General Mohammad Barkindo’s warning in a speech that the war could ultimately cut much deeper into global supplies.

“We could potentially see the loss of more than 7 million b/d of Russian oil and other liquids exports, resulting from current and future sanctions or other voluntary actions,” he told European Union (EU) members. “Considering the current demand outlook, it would be nearly impossible to replace a loss in volumes of this magnitude.”

OPEC on Tuesday also officially slashed its expectations for both 2022 oil production and demand, with researchers emphasizing heightened uncertainty on both fronts.

The day marked another in a string of sharp turns for the oil market.

Brent prices, the international benchmark, hovered near $130/bbl at its 2022 peak in March, when fallout from economic sanctions against Russia ignited supply/demand imbalance fears. In protest of Russia’s invasion of Ukraine, the United States banned imports of Kremlin-backed oil, and other countries followed suit, pushing more than 1 million b/d off the international market.

“It was evident that replacing so much oil would be a massive undertaking,” said Societe Generale Group’s Michael Haigh, head of commodities research. However, “prices pulled back amid demand concerns on the back of a rise in coronavirus cases, especially in China, which was experiencing the worst Covid-19 outbreak in two years.”

Indeed, by Monday, the Brent June contract had dropped well below $100, as supplies destined for China were put on hold amid a pandemic rebound in Shanghai, China’s largest city, and other markets in the country. China is the world’s largest oil importer. Shanghai and other Chinese cities were locked down in recent weeks, limiting mobility and diminishing the need for oil-based travel fuels.

Despite the restrictions, Chinese officials reported more than 26,000 new daily infections in Shanghai on Sunday, a record for the city.

At the same time, virus cases have mounted anew in parts of Europe. U.S. officials have cautioned that the new fast-spreading Covid subvariant had begun to impact Americans this spring, creating a wild card as weather warms and travel usually picks up ahead of summer.

In the United States, there were more than 31,000 new virus cases reported at the start of this week, up about 3% from two weeks earlier, according to federal data. In some major cities on the East Coast, though, cases jumped more dramatically in the same span. In New York City, for example, cases were up more than 40%, driven by the highly contagious Omicron subvariant BA.2 and eased restrictions, said Anthony Fauci, chief medical adviser to the White House. Cases spiked more than 70% in Washington, DC.

If more increases follow, “particularly of hospitalizations, we may need to revert back to being more careful and having more utilizations of masks indoors,” Fauci said during an interview this week on ABC.

Already, on Monday, the City of Philadelphia said it would reinstitute an indoor mask mandate, affecting everything from schools to restaurants.

The latest variant has proven far less lethal than earlier strains of the virus – at least in part because of inoculation campaigns. Yet, one-third of the U.S. population is not fully vaccinated and therefore highly susceptible to illness caused by the Omicron subvariant, according to the Centers for Disease Control and Prevention.

Where Are Oil Prices Headed?

At the same time, the United States and allied countries in the West committed to releasing 240 million bbl of oil from strategic reserves this year to offset the impacts of sanctions against Russia. President Biden vowed to unleash 1 million b/d from the U.S. Strategic Petroleum Reserve for the next six months, while other countries collectively promised to release 60 million bbl as part of a plan overseen by the International Energy Agency (IEA).

The Swiss investment bank UBS lowered its June Brent forecast by $10, though it still expects prices to reach $115/bbl this summer.

Other analysts also lowered expectations but from lofty levels. Bank of America (BofA) maintained its expectation for Brent to average $102 over the course of this year and next, but the firm cut its summer spike price to $120 from $150.

“The release of strategic government oil stocks and the rolling Covid-19 lockdowns in China have altered the oil price trajectory,” the BofA team said.

Paris-based IEA said the releases from strategic stockpiles would cover much of the Russian shortfalls for a few months – barring further reductions.

However, on top of formal sanctions, IEA estimated that, because of a combination of pandemic hits to consumption and growing international revolts against Moscow’s war in Ukraine, Russia may have to scale production back by 3 million b/d because of a lack of buyers. The EU is reportedly considering plans for a possible embargo on Russian oil should the war drag on.

Against that backdrop, markets are watching closely for changes in both U.S. production and output from OPEC and its allies known as OPEC-plus.

U.S. production for the week ended April 1 ticked up to 11.8 million b/d – a 2022 high — after holding at 11.6 million b/d through most of February and March. Output, however, remains more than 1 million b/d below pre-pandemic highs.

American producers have been under pressure to increase crude supplies because of the war. Still, amid soaring inflation, they have been constrained by high labor and input costs. They also are under pressure from investors to divert spending away from fossil fuels and toward green energy.

OPEC-plus, meanwhile, recently agreed to extend monthly production increases of about 400,000 b/d into May. This has been policy since last August, and it sets a measured pace that gradually unwinds production cuts of nearly 10 million b/d made in April 2020 amid the pandemic.

OPEC researchers on Tuesday lowered their forecasts for both global oil demand and production in 2022, citing lighter economic growth and the Russia-Ukraine conflict. The cartel said consumption this year would grow by 3.7 million b/d to 100.5 million b/d, though that was about 500,000 b/d lower than its outlook last month.

The researchers said supplies from outside of OPEC-plus would rise by 2.7 million b/d this year. The latest forecast is about 300,000 b/d lower than the prior outlook. They said the war had cut into supplies in the wake of sanctions but also exacerbated inflation to a point that demand is tapering demand in some corners of the world.

OPEC cut its forecasts for global economic growth for the year to 3.9% from 4.2% in its earlier assessment, citing energy-driven inflation.

The outlook also “takes into account the impact of the conflict in Eastern Europe, as well as the ongoing effects from the pandemic, with the risks skewed to the downside,” the cartel’s researchers said.

The U.S. Labor Department on Tuesday said the consumer-price index in March climbed at its fastest annual pace since December 1981 – 8.5%. That was up from 7.9% the previous month. Inflation has exceeded 6% for six consecutive months, which is the Federal Reserve’s targeted 2% rate.

The Fed in March raised interest rates to tamp down spending and curb inflation. It signaled several more rate hikes were likely this year.

Holding the line on production may prove wise, given the developments in China and inflation. However, if the EU were to ban Russian oil, the supply/demand dynamic could shift substantially, according to Rystad Energy.

“It is estimated that up to 2 million b/d of additional Russian crude production may be lost if the EU bans Russian oil,” Rystad’s Claudio Galimberti, senior vice president of analysis. 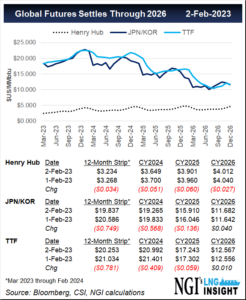 The European Union (EU) has published the first LNG reference price for use in a market control mechanism to cap natural gas prices under regulations that take effect later this month.  The reference price is an average of several liquefied natural gas indexes and benchmark prices that will be used to trigger the cap if…