The Port of Corpus Christi in South Texas, with an expansion project nearing completion, moved a record 46.4 million tons in the second quarter, it said Monday. 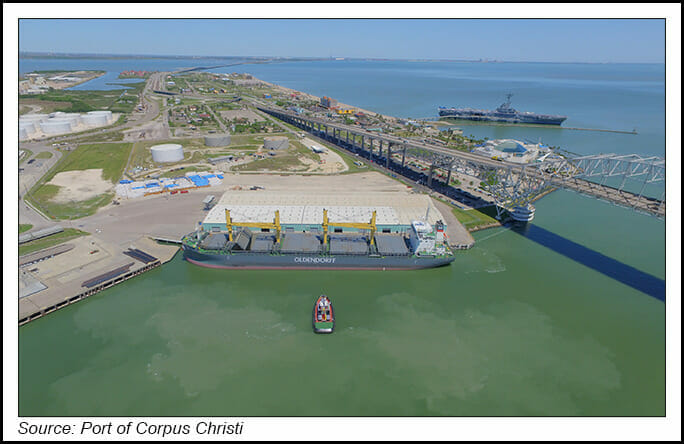 Driven by growth in crude and refined products, along with LNG and dry bulk cargo, the port’s tonnage in the quarter surpassed the prior record set in 4Q2021 by 4.8%. During the first six months of 2022 (1H2022), the port’s customers moved 90.1 million tons of commodities through its waterway, up 11.9% from the first half of 2021.

“The Port of Corpus Christi continues to break records and reach new heights due to its laser focus on developing the requisite maritime infrastructure to accommodate the growing demand for American energy commodities,” said CEO Sean Strawbridge.

Rystad Energy last month painted a rosy outlook for Gulf Coast oil exports, in particular. The consultancy said its base case model anticipates volumes nearing 4 million b/d in 1Q2023 and crossing that threshold by 2Q2023, thanks to strong draws from the Strategic Petroleum Reserve and a strong domestic supply outlook.

Rystad singled out the South Texas port as a “significant driver” of crude export growth, but said upstream and midstream bottlenecks could soften the forecast.

At the same time, the Corpus Christi port is looking toward greener opportunities amid the energy transition. It is considering green hydrogen production, storage, transportation and export operations as part of a partnership with Apex Clean Energy LLC and Epic Midstream Holdings LP.

“With additional initiatives in hydrogen production and Carbon Capture Utilization and Sequestration also in the development stages, the future continues to look bright for the South Texas Coastal Bend and beyond,” Zahn said.

Meanwhile, work is continuing on the Corpus Christi Ship Channel Improvement Project (CIP). The four-phase project is designed to increase the channel depth from minus 47 feet Mean Lower Low Water (MLLW) to minus 54 feet MLLW and widen it to 530 feet, with an additional 400 feet of barge shelves. Phase 1 of the project has been completed, and the second and third phases are under construction.

“As the Corpus Christi Ship Channel Improvement Project moves closer to completion (expected in 2023), the Port of Corpus Christi will have the deepest and widest ship channel in the entire U.S. Gulf Coast,” Strawbridge said. “This improved infrastructure will further reduce transportation costs for our customers and meet the increasing demand for energy across the globe.”

President Biden earlier this year included appropriations of $157.3 million for the CIP in his 2023 budget. If approved by Congress, the funds would enable the completion of the project in 2023.