With Permian Basin growth in its sights, Crestwood Equity Partners LP this week unveiled a wide-ranging strategy with the launch of a cryogenic plant in West Texas, more takeaway capacity and a key contract. 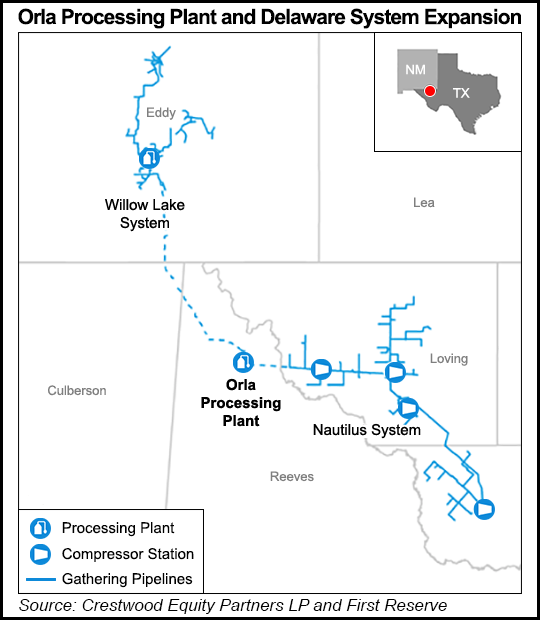 “Crestwood now operates a fully integrated gathering and processing system in the core of the Delaware Basin that is scaled to meet our producer’s current and future expected volume growth.”

In addition to the Orla projects, the Nautilus-to-Orla Pipeline, a 28-mile, 20-inch diameter high pressure line that connects the Nautilus system to the Orla plant, should ramp up within a few days, CPJV said.

Royal Dutch Shell plc’s SWEPI LP unit last year purchased a half-stake in the Nautilus system, which gathers most of the supermajor’s gas output in the Delaware sub-basin.

CPJV’s Delaware gathering and processing assets now include 255 MMcf/d of processing capacity, 650 MMcf/d of gas gathering capacity and 390 miles of integrated pipelines spanning the northern and southern end of the formation.

CPJV also disclosed that it is taking an undivided joint ownership in Epic Y-Grade Pipeline LP’s Orla-to-Benedum segment in Texas, a 16-inch diameter NGL pipeline, which began service in June.

The NGL system is to run side-by-side for most of its route with the Epic Crude Oil Pipeline, a 730-mile, 440,000 b/d crude and condensate pipeline to transport liquids from West Texas to South Texas near Corpus Christi.

The ownership interest in the Orla-to-Benedum segment would give CPJV control of 80,000 b/d of capacity into multiple downstream connections in the Benedum, TX, area, with ultimate access south to Texas markets near Sweeny, Mont Belvieu and Corpus Christi.

The 80,000 b/d of capacity, considered sufficient to move NGLs from the new Orla plant plus two additional 250 MMcf/d processing train expansions, is being marketed on a standalone basis as a CPJV proprietary pipeline.

In addition, CPJV has contracted with Chevron Phillips Chemical Co. LP to sell Y-grade liquids from the Orla plant via the Orla-to-Benedum segment to provide feedstock for the Chevron Phillips Complex near Sweeney.