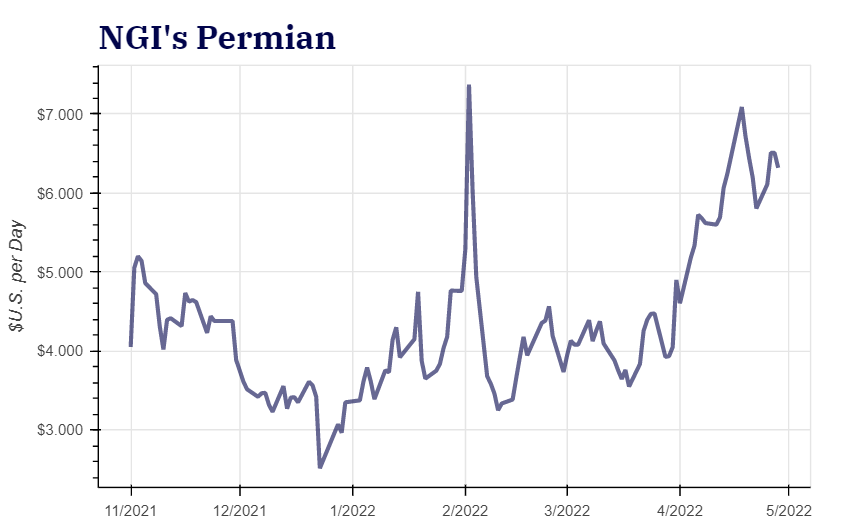 The Houston-based company expects continued momentum. It said key gathering and processing assets leveraged to higher producer activity in the Williston, Delaware and Powder River Basins in the second and third quarters would drive steady volumes through the second half of this year and into 2023.

Fueled by rebounding demand and supply worries tied to Russia’s invasion of Ukraine, West Texas Intermediate crude prices, the U.S. benchmark, approached $110/bbl in March and have remained above $100 much of April.

Henry Hub natural gas futures prices have been elevated in 2022 as well, reaching a 13-year high in early April. Threats to European gas supplies amid the war in Ukraine punctuated already robust demand from the continent for U.S. exports of liquefied natural gas (LNG).

The recent acquisition also is paying off. Crestwood closed its $1.8 billion deal for Oasis Midstream early this year, expanding its foothold in two of the Lower 48’s prized basins — the Williston and the Permian Basin’s Delaware sub-basin.

In the southern section of its gathering and processing (G&P) segment, the midstreamer reported a 10% year/year increase in total gas gathering volumes. This was led higher by a 29% increase in the Delaware, driven by producer activity on the Willow Lake system in New Mexico. The segment results also include two months of contribution from the Delaware oil and water gathering assets acquired from Oasis Midstream.

In its smaller G&P North division, the company said total gas gathering volumes surged 49% year/year, thanks in large part to contributions from the Oasis Midstream assets. The company said volumes in the G&P North segment were adversely affected by extreme winter weather in the Williston and Powder River basins during the first quarter. The conditions limited producer facilities and development activity in January and February.

However, with milder weather expected in the second and third quarters and commodity prices remaining strong, Crestwood expects producers to accelerate drilling and completion activity, driving an increase in activity and revenue for the remainder of the year.

“We are currently seeing increased producer activity across the portfolio, which should support growing volumes, margins and earnings,” Phillips said.

The project, which includes a swelling slate of midstream companies as well as academic researchers, involves quantification, monitoring, reporting and verification (QMRV) of emissions at natural gas gathering, processing, transmission and storage systems.

“We remain resolute on evolving our emissions measurement capabilities in the field and believe participation in the QMRV project…will further propel Crestwood’s, and the midstream sector’s, understanding and use of leading measurement protocols and emissions monitoring technologies,” Phillips said.