Crestwood Equity Partners LP is on track to achieve its 2021 planned guidance and reduce debt after a strong operating quarter, particularly in the Bakken Shale, where higher commodity prices led to double-digit volume growth year/year. 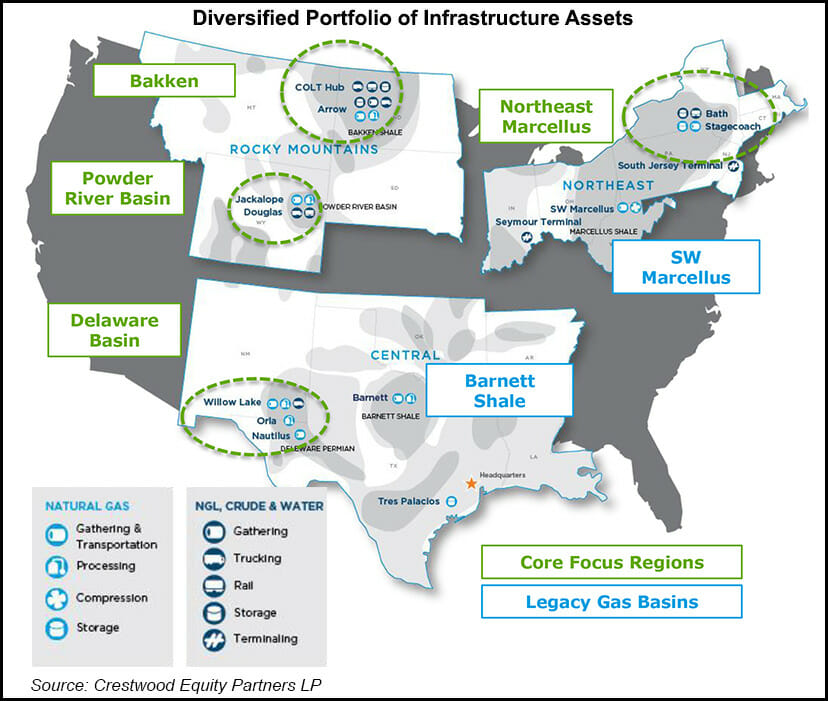 The Houston-based midstreamer also closed on one of several strategic transactions aimed at simplifying the corporate structure. The deals also position the company to “opportunistically execute” its share repurchase program.

Crestwood also purchased the general partner interest and the remaining 11.5 million units held by First Reserve with $268 million drawn on its existing $1.25 billion revolving credit facility. The deal is expected to close in the coming months.

The “historic” transactions effectively end First Reserve’s investment in Crestwood. At the same time, they transition the midstreamer to an independent master limited partnership with an elected board of directors. A spring 2022 board meeting is planned.

“The transaction provided what we thought was a very elegant solution for First Reserve to exit their 10-year investment in Crestwood and set up the partnership for success going forward,” CEO Bob Phillips said Tuesday on the quarterly earnings call.

The series of transactions “not only improves Crestwood’s financial and strategic flexibility in the future, but greatly simplifies our capital structure,” according to the chief executive. First Reserve remains a partner in Crestwood’s joint venture (JV) in the Delaware sub-basin of the Permian Basin.

Following the completion of these transactions, Crestwood would have about 62.8 million common units outstanding, representing a roughly 15% reduction. The company’s purchase and retirement of the 11.5 million common units from First Reserve is expected to result in annual cash distribution savings of about $29 million based on the current annual distribution rate of $2.50/share.

The midstreamer currently has 10 rigs operating on acreage dedicated to its gathering and processing (G&P) system in the Bakken, the Powder River Basin and the Permian Delaware. This level of activity, according to the CEO, is expected to drive an increase in well connects in the second half of the year. That should drive volume growth into the summer and the back half of this year.

In the Bakken, two rigs are currently running, with two completion crews operating on acreage dedicated to Crestwood’s Arrow system. These are expected to drive 10-15 new three-product well connections, comprised of crude oil, natural gas and water. In addition, 10-15 water-only well connections are expected in 2Q2021.

The company continues to expect at least 45 three-product wells to be connected in 2021 in the current commodity price environment.

At the end of March, Crestwood had spent $4.3 million in the Bakken, primarily to complete the southern expansion of Arrow’s produced water gathering infrastructure. For the remainder of 2021, capital investments in the Bakken target the enhancement and expansion of the produced water gathering system and incremental natural gas compression projects to support producer development plans.

Meanwhile, management continues to monitor the legal proceedings related to the Dakota Access Pipeline (DAPL), but indicated there is “plenty of excess capacity beyond DAPL on other pipelines throughout the basin” to move volumes out of North Dakota.

For example, Crestwood expects to be able to move an additional 70,000 bbl onto the Bridger Four Bears oil pipeline by the end of May. It also has the Colt Hub, where rail loading volumes in 1Q2021 increased 17% sequentially as demand has continued to increase in light of the uncertainty surrounding DAPL.

In the Permian Delaware, which spans West Texas and southern New Mexico, Crestwood invested $3.3 million during the quarter related to system expansions and well-connect capital.

It expects a “material increase” in activity on the Willow Lake system at the beginning of 2Q2021, driven by new well connections from ConocoPhillips and Mewbourne Oil Co. This would result in incremental gathering volumes as well as a significant increase in volumes processed at the Orla processing plant.

Based on current producer forecasts, Crestwood estimates 30 to 40 wells to be connected to the Delaware gathering systems during 2Q2021.

In the first three months of the year, the in-basin systems averaged gathering volumes of 182 MMcf/d and processing volumes of 54 MMcf/d. Gathering volumes increased 5% sequentially as a result of 23 new wells connected to the systems driven primarily by Royal Dutch Shell plc’s development program on the Nautilus gathering system. However, volumes across the Nautilus and Willow Lake systems were negatively impacted by the extreme February weather.

Produced water gathering volumes averaged 48,000 barrels/day during the quarter, up 10% from 4Q2020 as the anchor producer re-used fewer barrels for completion activities.

Citing the sustained strength in oil prices, Phillips said completion operations also have begun on a new eight-well pad on Crestwood’s Lake Arlington system in the Barnett Shale. Crestwood’s gathering infrastructure is connected to the pad, and initial production is expected in the coming weeks.

“The new pad will be the first new wells completed on the Lake Arlington system in over five years and utilize modern well bore and frack design techniques to optimize initial flow performance,” Crestwood said. The company expects the incremental volumes from this activity to more than offset natural field decline for the year.

Crestwood management took the time on the call to discuss the potential divestiture of Consolidated Edison Inc.’s (ConEd) 50% stake in the Stagecoach storage and transportation asset in the Northeast.

Phillips said Stagecoach has continued to see “record demand” as a result of increased production in the Marcellus Shale, with storage and transportation assets nearly 100% contracted.

However, the midstreamer recorded a $140 million goodwill impairment on its equity investment in Stagecoach during the quarter. This impairment charge is a non-cash adjustment of the fair value of the assets based on market information received during the quarter, according to the CEO.

Crestwood has been “pleasantly surprised” with the number of participants and the quality of the participants involved in the potential asset sale, “which to us speaks to the real value of the asset at this point in time,” Phillips said.

“The business is performing well ahead of plan for the year, and we continue to see that for the balance of the year,” the CEO added. “That’s a great fundamental backdrop to be participating in this process with our partner ConEd.”

Crestwood spent around $8.8 million in consolidated growth capital projects and JV contributions during the quarter. Growth capital for 2021 is targeted in the range of $35-45 million. Another $20-25 million is earmarked for maintenance capital. Based on the current outlook, Crestwood expects to fund its total 2021 capital program entirely with retained cash flow and to generate meaningful free cash flow after distributions.