Crestwood Equity Partners LP said Tuesday it has agreed to pay $1.8 billion in equity and cash, including debt, for Oasis Midstream Partners LP, expanding its foothold in two of the Lower 48’s prized oil basins. 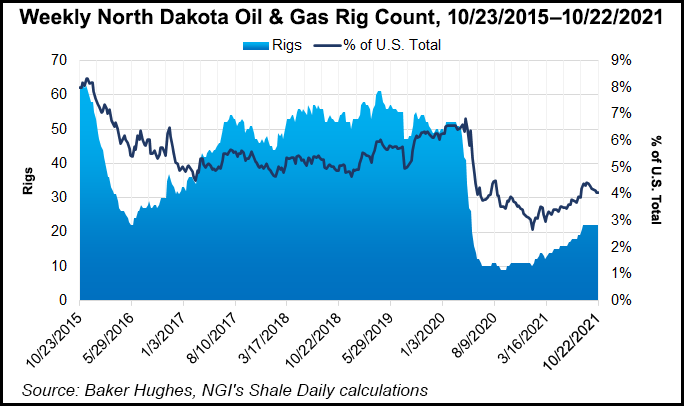 The deal expands Crestwood’s midstream footprint in the Williston Basin and the Permian Basin’s Delaware sub-basin. The firms said the combination would bring together “significant” crude oil, produced water, and natural gas gathering and processing assets.

The announcement coincided with the reporting of Crestwood’s third quarter earnings results. During a conference call to discuss results, Crestwood general partner CEO Robert Phillips said the acquisition would position the Houston company “as a top three midstream company” in the Williston’s Bakken Shale. He noted that natural gas capture rates are improving in the Bakken, “which bodes well for increased gathering and processing volumes in the future…”

The transaction, slated to close in early 2022, would largely be equity-financed, with about 33.8 million newly issued Crestwood common units and $160 million cash.

Phillips said the deal “enhances our competitive position in the Williston and Delaware basins…and substantially expands the long-term contract acreage and inventory dedications of our gathering and processing portfolio.

“Importantly, we are completing this transaction during a period when macro oil and gas fundamentals are exceptionally supportive of upstream development and there is increasing demand for midstream infrastructure and services.”

CFO Robert Halpin concurred. He told analysts “the outlook for 2022 in light of the commodity price environment is very favorable. We continue to see uptick in rigs across every basin in which we operate to varying degrees…

“We continue to see increases in completion activity expectations from our producers” in the Bakken, Powder River Basin (PRB) and in the Delaware, “and we think all of that is going to add to the outlook for ‘22 and beyond going forward.”

Crestwood and Oasis are both master limited partnerships. Oasis Midstream was formed by sponsor Oasis Petroleum Inc., a Houston-based independent exploration and production company that operates primarily in the Williston’s Bakken Shale.

“The combination of Crestwood and Oasis Midstream creates a midstream leader well positioned with size, scale and a diversified customer base,” said Oasis Petroleum CEO Danny Brown. “Crestwood’s experienced team brings a track record of operational excellence to handle a large portion of our company’s hydrocarbons and produced water in the Williston Basin.”

In the Williston, home to the mighty Bakken, the transaction would double the inventory of Tier 1 1 drilling locations dedicated to Crestwood’s assets to about 1,200 locations across 535,000 dedicated acres.

It also “expands Crestwood’s footprint into the western and northern parts of the basin,” management said. “As the commodity price outlook remains favorable for an acceleration of activity across the basin, this expanded footprint positions Crestwood to more aggressively pursue third party volumes and incremental bolt-on consolidation opportunities to further optimize utilization of existing infrastructure.”

In the Williston, “Crestwood expects to physically connect its Arrow system with Oasis Midstream’s Wild Basin system and the combined footprint will have 430 MMcf/d of total processing capacity and current natural gas throughput of approximately 330 MMcf/d,” the companies said.

Phillips said North Dakota producers expect gas processing capacity in the Williston to be constrained as early as 2024, “so we’re getting ahead of the curve.”

Upon closing, former unitholders of Oasis Midstream would own about 35% of Crestwood’s outstanding common units, with 22% owned by Oasis Petroleum.