Crestwood Equity Partners LP is offering incentive rates across its midstream portfolio in order to generate revenue, but management expects the natural gas liquids (NGL) storage and rail-to-truck liquid petroleum gas (LPG) terminal assets that it recently acquired to be the largest contributor to a projected 3% year/year increase in earnings this year. 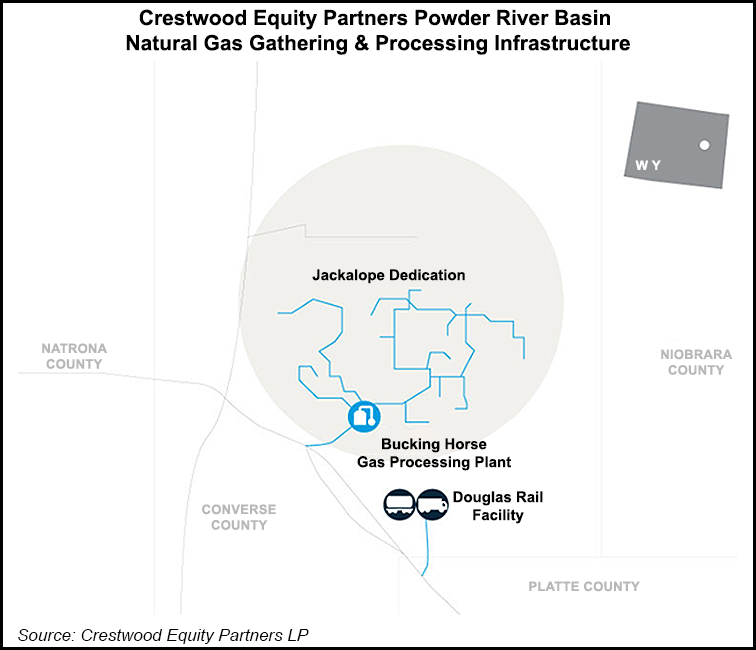 Crestwood closed on a $160 million deal with Plains All American Pipeline LP in April for the long-coveted “demand-pull” assets, which added around 7 million barrels of NGL storage, a multi-year supply agreement with Plains and additional access to “attractive” transportation capacity from Mont Belvieu, TX, “which provides additional supply and operational diversification,” according to Crestwood CEO Robert Phillips.

“We purchased these premium assets at a great value for us because we expect them to generate $35 million to $40 million over the next 12 months and add meaningful cash flow to our 2020 results,” Phillips said Tuesday on a call to discuss first quarter earnings.

The NGL and LPG assets, located in the central and eastern United States, allow Crestwood to “take advantage of the contango in the market” and give it a much wider supply and transportation net, according to the company chief.

“It makes us a much bigger, better, stronger NGL player across the entire marketplace, and we’re really pleased with the opportunity to close that deal. These are good assets.”

Meanwhile, Crestwood has been able to offer incentive rates on its disposable water system in the Bakken Shale to keep product flowing, while other producers in the region have utilized the 1.2 million barrels of oil storage at the COLT Hub and on the Arrow system.

While not expected to be particularly impactful to Crestwood’s 2020 guidance, the incentive rates are an example of the ways in which the firm is working with customers “to incentivize production to stay on our system that might otherwise get curtailed,” according to CFO Robert Halpin. All the agreements are short term, typically on a month-to-month type basis.

Crestwood expects 50% of its oil-weighted assets to be shut in through the end of July, but indicated that several larger producer customers are continuing to drill through the downturn, with completions likely to occur in the fourth quarter. WPX Energy Inc. and XTO Energy Inc. continue to run active rigs in the Bakken, while Royal Dutch Shell plc is operating in the Delaware sub-basin of the Permian Basin, according to Halpin.

“Based on our ongoing conversations with these larger customers, we expect some will begin to complete their substantial DUC inventory during the fourth quarter of 2020,” the executive said.

Crestwood expects that by the fourth quarter, there may be close to 60 drilled but uncompleted wells (DUC) in the Bakken, at least 10 in the Powder River Basin (PRB) and a “good accumulation” in the Permian Basin. “Every producer has a different target price to where they’re going to complete the DUCs, and that has continued to evolve, but we do see them coming in the fourth quarter and each day that goes by, we feel more and more good about our forecasts,” management said.

Seventy percent of Crestwood’s cash flow is driven by the gathering and processing (G&P) segment, with 30% coming from legacy dry gas assets in the Barnett, Marcellus and Fayetteville shales, which are “uniquely stable” and on a “predictable” proved developed production decline, according to Phillips.

“These are older wells with a really flat decline,” said the CEO. “They likely will not incur the same level of shut-ins, if any, as the oil-weighted assets. They require no incremental capital investment, and they even offer upside potential as the forward strip of natural gas continues to improve.”

Crestwood also has secured arrangements with some customers around its storage positions to help optimize net back pricing, a strategy the company may continue to deploy as conditions warrant. The master limited partnership also has exercised contract terms to improve its credit protections from some customers.

“We’re in really good shape from a receivable standpoint and getting paid back on capital reimbursements from a lot of our producers in the areas that we operate,” Phillips said.

Crestwood has put full letters of credit protection in place for current receivables outstanding from Chesapeake Energy Corp., the primary shipper on the Jackalope G&P system, according to the CEO. Chesapeake, which is expected to represent less than 15% of Crestwood’s total cash flow in 2020, recently adopted a shareholder rights plan to protect against a hostile takeover amid the oil market downturn and Covid-19 pandemic. The firm also is reportedly considering filing for bankruptcy.

“That is a relatively new contract with good contract language,” Phillips said of Crestwood’s business with Chesapeake, which includes “a dedication that is very favorable towards us and a large wide system that has over 350 wells connected to it. It would be very difficult for that contract to get rejected in bankruptcy.”

With uncertainty surrounding the eventual economic recovery in the wake of the coronavirus and oil price rout, Crestwood has reduced the remaining capital spend for 2020 by $40 million and has decreased its run rate general and administrative, and operation and maintenance costs by a total of $80 million.

To achieve those savings, Crestwood downsized by about 20%, with additional cost savings expected through variable costs as volumes are shut in during the second and third quarters. Phillips noted that the technical services group that was put in place to execute on the company’s three-year capital build-out program to 2019 was largely carried over into the first half of 2020 in order to bring some major projects, including the Bucking Horse II processing plant in the PRB, over the finish line.

“We’ve done that,” Phillips said. “So the reengineering of the organization was likely going to occur to some extent anyway as we saw that big three-year capital program decline. I think what the pandemic has done is that it’s going to be awhile before we build out new facilities. We’ve got a lot of capacity in areas that we operate, and now we’re going to be focused on lowering our variable operating cost.”

As of March 31, Crestwood had about $2.4 billion of long-term debt outstanding, with no debt maturities until 2023. Management expects the partnership to become free cash flow positive in the third quarter.