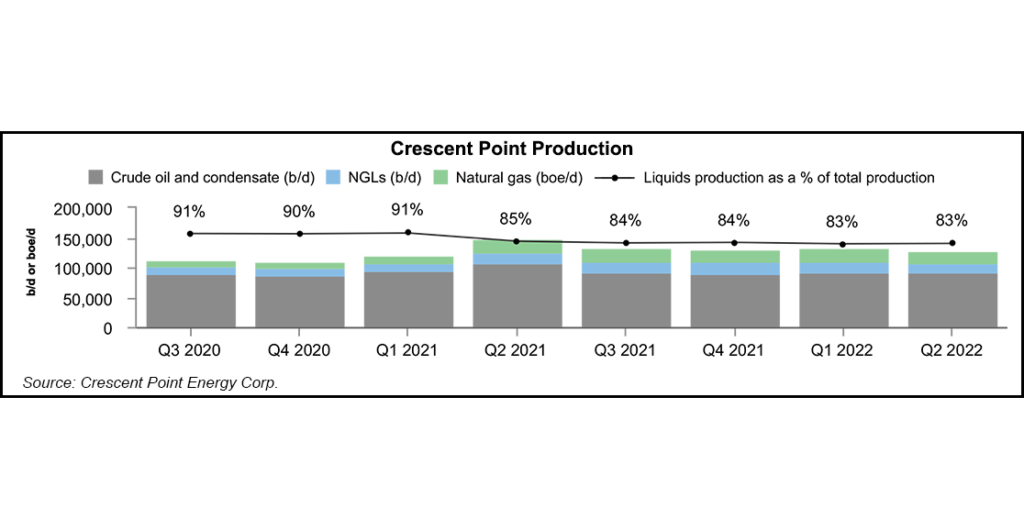 The independent issued its 2Q2022 results in late July, noting it has a wary eye on the inflation threats to profitability.

“The company has controlled a significant portion of its capital costs to date through supply chain management while also mitigating potential cost increases through realized efficiencies,” executives said.

CEO Craig Bryksa added that the company remains “focused on creating long-term value through a combination of returning capital, while also enhancing the balance sheet strength and sustainability of the business.”

One area of achievement that Crescent Point noted was the solid initial production (IP) rate over 30 days, primarily liquids, on the second fully operated multi-well pad in Kaybob Duvernay.

Average IP rate was 900 boe/d per well, which was weighted 71% to condensate, 21% to natural gas and 8% to natural gas liquids. Crescent Point also reduced drilling days on its most recent pad, which averaged 14 days per well.

Crescent Point, which also works in the Bakken Shale of North Dakota, said production “was also impacted by a severe storm and power outage in North Dakota that reduced production by approximately 4,000 boe/d.”

Shareholders during 2Q2022 also collected a $108 million bonus in dividends and buybacks. A 20% dividend increase to 8 cents/share is to begin in 3Q2022. Share buybacks and special dividends are set to rise by up to 50% of discretionary excess cash flow from 30%.