Crescent Point Energy Corp. improved the speed at which it drilled wells in the Bakken Shale in North Dakota and the Kaybob Duvernay formation in Alberta, the Calgary-based independent reported Thursday. 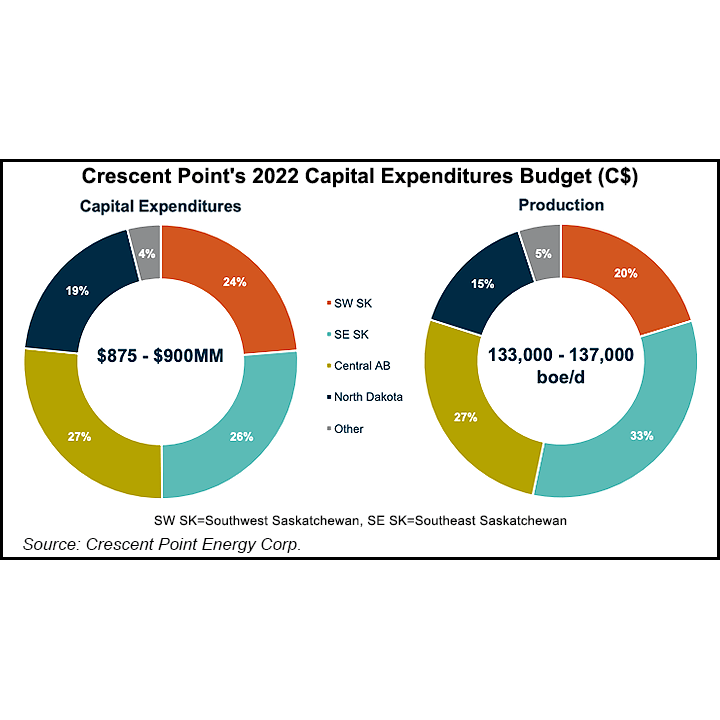 “During first quarter 2022, Crescent Point commenced completion activities on its second fully operated multi-well pad in the Kaybob Duvernay, which it expects to bring on production in second quarter 2022,” the company said.

In early 2021 the firm acquired liquids-rich Kaybob Duvernay acreage from Shell Canada Ltd. Since then, drilling days are down more than 30%, averaging fewer than 15 days on its most recent well pad, Crescent Point said in its 1Q2022 earnings report.

During the first quarter, completion activities started on Crescent Point’s second operated Kaybob Duvernay multi-well pad, which is expected to turn to sales by the end of June.

Through the second half of this year, the company expects to bring 16 additional net wells online in the Kaybob. Crescent Point holds about 200 net drilling locations in the Western Canadian Sedimentary Basin.

Management also said the company has achieved a 15% reduction in drilling days in North Dakota, where it holds Baken and Three Forks acreage in Williams County.

“This represents less than 10 days of drilling, which is a new record” for Crescent Point in the play, management said.

In addition to its Alberta and North Dakota acreage, Crescent Point also operates in Saskatchewan.

The higher year/year commodity prices, along with an asset value recovery, enabled Crescent Point to declare a dividend increase, buy back shares, and cut debt during the first three months of this year.

In response to the financial improvement, Crescent increased its annual dividend 40% to 26 cents/share and cut debt 12% to $1.77 billion. Moreover, it has paid stockholders $110 million with share buybacks since December.

“As we move closer to attaining our near-term net debt target, we expect to release an updated return of capital framework and will be in a better position to further increase the level of excess cash flow currently returned to shareholders,” said Bryksa.