California regulators and Pacific Gas and Electric (PG&E)earlier this week protested a letter agreement between El PasoNatural Gas and Dynegy Marketing and Trading, that they claim wouldgive the latter the “unilateral right” to keep a large portion ofthe Block II capacity on El Paso off the California market withoutbeing subject to recall rights.

They contend the letter agreement runs contrary to a June orderin which FERC approved the Dynegy contracts for 1.3 Bcf/d ofcapacity on El Paso subject to modifications, and a 1996 settlementbetween El Paso and its customers. Under the settlement, PG&Epaid $58.4 million to preserve Block II capacity (614 MMcf/d) toprovide shippers serving northern California with access to the SanJuan Basin. But El Paso sold the capacity to Dynegy last year aspart of a 1.3 Bcf/d deal, prompting PG&E and state regulatorsto argue that the Houston marketer intended to keep the capacityoff the market and subsequently drive up prices. They noted theyhad recall rights on the Block II capacity.

But FERC last month ruled that shippers serving northernCalifornia couldn’t recall the Block II capacity simply because itwasn’t being used by Dynegy. However, the Commission added the firmtransportation capacity would become recallable in the event thatDynegy used it to serve customers outside of PG&E’s serviceterritory.

In the June order, FERC ordered El Paso to make certainamendments in its contracts with Dynegy with respect to therecallability of Block II capacity. El Paso and Dynegy respondedwith a letter, or compliance, agreement that “concoct[s] numerousobstacles that effectively ensure that the Block II capacity willnever be subject to the recall provisions of the El Pasosettlement,” the California Public Utilities Commission (CPUC) said[RP97-287-019].

The El Paso-Dynegy letter agreement, which was submitted to FERCon June 25, “explicitly grants NGC/Dynegy the right not to useBlock capacity (or portions thereof) to serve the northernCalifornia [market] throughout the entire two-year period of theBlock II contract between El Paso and NGC.” it protested. Ineffect, the agreement gives Dynegy the “unilateral right” to simplytake Block II capacity off the market, the state commission said.Recall provisions, according to the El Paso-Dynegy agreement, wouldbe enforced only if Dynegy used Block II capacity to serve endusers that aren’t in PG&E’s service territory.

This “goes way beyond” FERC’s June order and is “totallyinconsistent” with the Commission’s decision approving El Paso’s1996 settlement, the CPUC argued.

The CPUC also took issue with a provision of the letteragreement that “attempts to limit the recall feature such that itcannot be exercised when there is any firm capacity available on ElPaso or any other pipeline to northern California.” This, it added,is an “unreasonable restriction.” 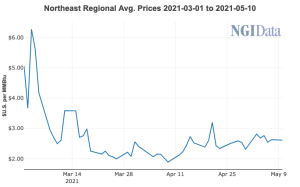