Continued uncertainty around the Covid-19 pandemic has kept a lid on rallying oil prices, according to the World Bank. 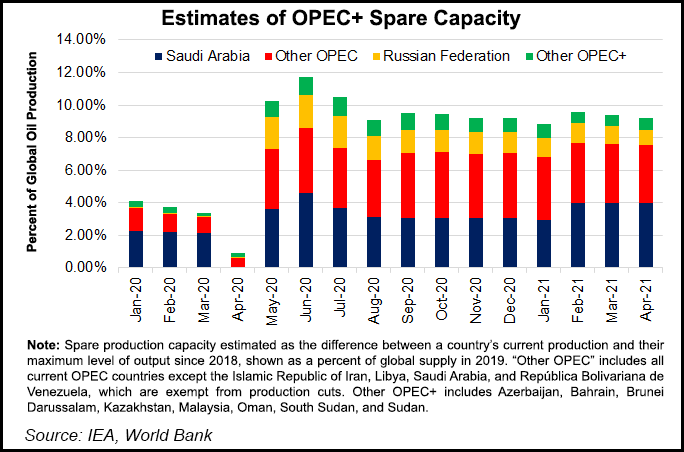 Though prices have been supported by continued production restraint by the Organization of the Petroleum Exporting Countries and their allies, aka OPEC-plus,“the pickup in oil prices has been partly dampened by uncertainty regarding the evolution of the pandemic and its potential impact on future oil demand,” the World Bank said in Global Economic Prospects.

Prices have been on the rise on increased demand as vaccine programs are rolled out and economies recover. Brent and West Texas Intermediate have both recently risen to more than $70/bbl.

World Bank researchers expect oil prices to average $62/bbl in 2021 and 2022, based mainly on expected subdued jet fuel consumption. Meanwhile, the U.S. Energy Information Administration recently noted Brent crude averaged $68/bbl in May, a 25% increase over January, and it now expects the benchmark to average around $60 for the year.

The World Bank said a key risk to its forecast is the speed at which OPEC-plus may raise production, noting the cartel currently has spare capacity of up to 9 million b/d, equivalent to 9% of global consumption in 2019.

Increased drilling by Lower 48 oil and gas producers could also provide a risk to the price forecast, the World Bank noted.

“In the longer term, the outlook for oil and other energy commodities will be dependent on the pace of transition toward renewable energy sources,” researchers said.

The 198-page report outlines the potential for a global economic recovery from the pandemic in the coming months. It projected the global economy would expand 5.6% this year, the strongest post-recession pace in 80 years.

However, the World Bank also said the recovery appears to be “uneven.” Major economies, led by the United States, are expected to rebound while emerging market and developing economies (EMDE) still grapple to control the pandemic.

“Elevated Covid-19 caseloads, obstacles to vaccination, and a partial withdrawal of macroeconomic support are offsetting some of the benefits of strengthening external demand and elevated commodity prices” in some EMDEs, according to the research.

While oil exporting, low income countries such as Chad and South Sudan are set to benefit from stronger oil prices, those higher prices could also prompt a rise in global oil supply from the United States or OPEC-plus nations should their production agreement fail. That could lead to weaker prices and revenue shortfalls in low-income countries, according to the report.

The organization also noted that the rise in oil prices and faster-than-expected recoveries were supporting greater economic activity in oil exporting countries in the Middle East. For example, Iran avoided an expected contraction in fiscal year 2020-2021, which ended in March, while a contraction in Saudi Arabia’s oil industry was offset by a boost in activity outside of oil production. Meanwhile, activity increased in Qatar and the United Arab Emirates earlier this year amid a successful vaccination campaign.

“Rising oil prices, and a recovery in demand, are expected to return current account balances to surplus and increase inflation in many oil exporters,” according to World Bank’s researchers.

Overall, global output by 2022 is forecast to be about 2% below pre-pandemic projections, and  “per capita income losses incurred last year will not be fully unwound in about two-thirds of EMDEs.”

The report suggested a “more equitable” vaccine rollout would be needed to control the pandemic at a global level, especially in low-income countries.

“The legacies of the pandemic exacerbate the challenges facing policy makers as they balance the need to support the recovery while safeguarding price stability and fiscal sustainability,” said researchers. “As the recovery becomes more entrenched, policy makers also need to continue efforts toward promoting growth-enhancing reforms and steering their economies onto a green, resilient and inclusive development path.”