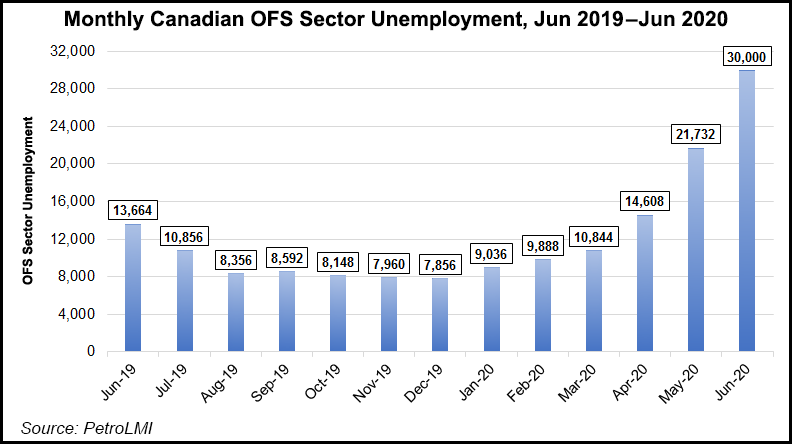 Employment continued to shrink during June in Canadian oil and natural gas fields, with service and supply contractors suffering the deepest losses, according to the industry’s workforce monitoring agency.

The June job toll continued a pattern shown in May, when 6,100 lost field positions accounted for 89% of 6,870 layoffs in the Canadian fossil fuel exploration and production sector.

Since January, employment has shrunk by 24,100 or nearly 30% in the industry’s service and supply contractor sector, chiefly in Alberta, the top Canadian oil and gas producing province.

Pipelines also dismissed 400 employees. Shrinkage of the Canadian energy pipeline and field work forces has only been partly offset by a marginal increase in jobs at production companies that have added 2,100 employees, said PetroLMI.

A drilling slump, due to shaky commodity prices and public health emergency responses to the Covid-19 virus pandemic, is driving field job losses. The industry predicts a 2020 Canadian well count of only 3,100, the fewest since a 1971 low of 2,934.

To counter the economic blows, decisions are beginning on applications for C$1.7 billion ($1.3 billion) in national government grants and loans for cleanups of discarded, depleted wells and methane leaks. The aid is forecast to save 5,200 field jobs.

Setbacks caused by price lows and the pandemic also register in oil exports tracked by the Canada Energy Regulator (CER).

By late spring industry and the CER estimated Canadian oil shut-ins and traffic cuts on pipelines and railways peaked at 1 million b/d or more than 20% of the normal national total of 4.3-4.5 million b/d.

With demand rising and prices back up in the $40/bbl range, industry analysts believe about 200,000 b/d of the Canadian production shut off during the first shock of the virus pandemic has been restored so far this summer.