Across the county, moratoriums on gas, electricity, and water shut-offs put in place in the early weeks of the Covid-19 pandemic are about to expire, and by Oct. 1, 36 states may not have utility shut-off moratoriums, according to data from Carbon Switch. 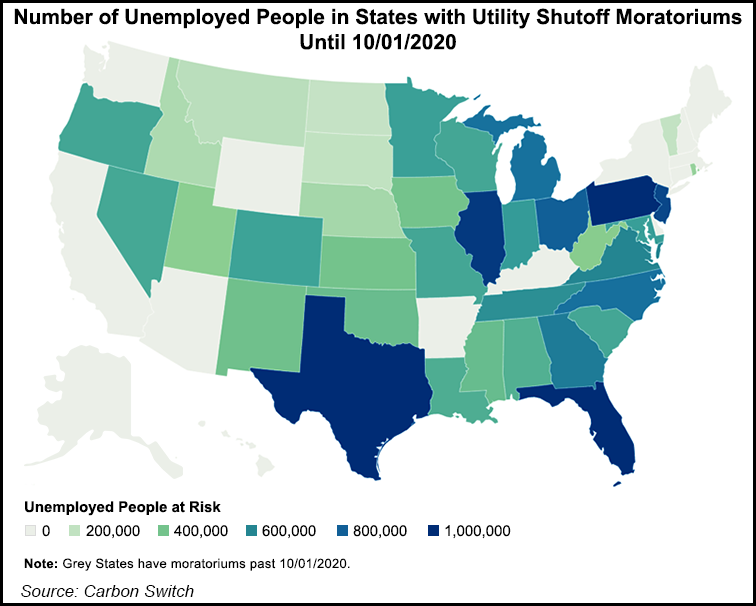 The United States saw unemployment at an all time high of 14.7% in April, when the pandemic was first wreaking havoc on the economy. As a result, 32 states and public utility commissions instituted measures freezing shutoffs for households that were unable to pay their bills as a short-term measure, according to Carbon Switch, an energy efficiency startup.

While 14 states never issued shut-off moratoriums, many customers have relied on utility companies to voluntarily issue moratorium policies. In September, those states are set to reach the expiration date. According to data from Carbon Switch, the 14 states account for almost 34.6 million households, with slightly under 4.3 million below the federal poverty line.

Carbon Switch also noted that an additional 4.3 million households in those 14 states are also unemployed, according to data released in early August by the Bureau of Labor and Statistics.

Although many utilities across the country announced moratoriums, few provided customers with a date to resume potential connection shut-offs. Several utilities, Carbon Switch noted, have since resumed shutting off power to customers with unpaid bills.

Some utilities never issued moratoriums. For example, Southern Company, while it engaged in philanthropic efforts and fundraising, never issued an internal shut-off moratorium. And California has prevented its IOUs from shutting off power until at least next year, the nation’s longest spanning moratorium.

Carbon Switch Founder Michael Thomas said as many as one-third of customers are behind on payments in some states. In North Carolina, an estimated 1.37 million residential customer accounts “between April 1 and June 30 were eligible for disconnection but had not yet been disconnected. The moratorium in North Carolina, with 3.8 million households, was scheduled to expire on Tuesday (Sept. 1).