World oil demand in the first quarter is forecast to decline by the largest volume in history, exceeding the fall-off during the financial crisis that began in late 2008. 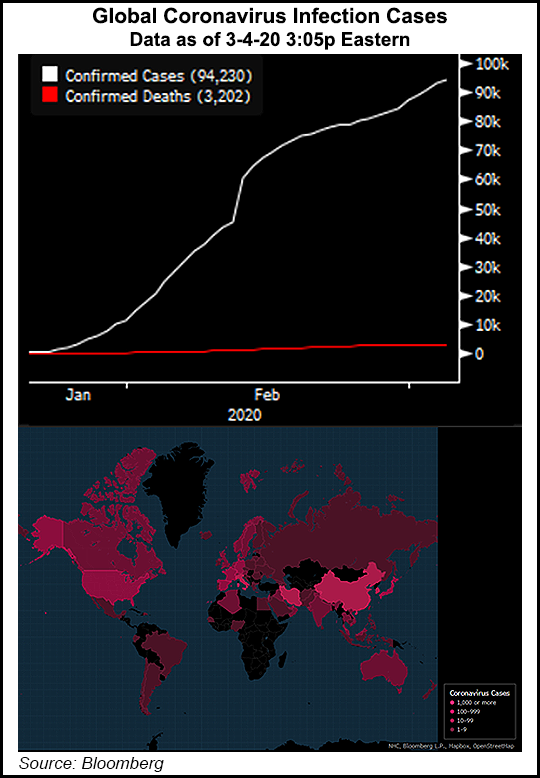 Even with a recovery in the second half of 2020, “it now appears likely that oil demand will be less than in 2019.”

The impact on oil prices is expected through this year. Because global gross domestic product growth has faded, BofA Global Research analysts have reduced their outlook by $8/bbl for West Texas Intermediate (WTI) and Brent oil prices through the rest of the year.

Brent now is seen averaging $54, while WTI should average $49, the BofA analysts said.

WTI is forecast to average $51 in the first quarter, then fall sharply from April through June to an average of $43. In 3Q2019, WTI is predicted to average $49, rising to $53 in the final three months of the year, according to the BofA Global Research team.

Meanwhile, the upstream oil and gas sector’s biggest commercial fear from the epidemic is the continuing impact on demand and prices, Wood Mackenzie analysts said.

Manufacturing shutdowns and shipping bottlenecks are causing project delays, with vessels and other large components constructed in affected shipyards having the most obvious supply impact.

The volumes so far at risk are not considered material in global production terms.

“For most operators, even if delays stretch to six months, the greatest impact is prevailing oil and gas prices,” said Wood Mackenzie’s Fraser McKay, head of upstream analysis.

For example, a three-month delay at the Equinor ASA-led Johan Castberg development underway offshore Norway would dent net present value, discounted at an annual rate of 10% (aka NPV-10) by less than 1%, he said. The effect of a 5% increase in remaining capital expenditures is estimated to be about double that figure.

A sustained Brent oil price drop of $10, however, could mean $1 billion/quarter less cash flow for Equinor.

Using Wood Mackenzie’s Lens Direct data, McKay said the calculated $10 change in price, around the pullback in Brent since January, would have a $40 billion/quarter impact on global cash flow.

“For some companies, this could make the difference between increasing shareholder distributions or another year of negative cash flow,” he said.

To date, there has only been a minimal impact on flowing supply, so industry instead has focused on the impact to newbuild activity.

“We estimate projects with peak capacity of 1.5 million b/d and nearly 4 Bcf/d are at risk of delay relative to our start-up estimates,” McKay said. “A total of 2 million b/d and 6 Bcf/d is under construction across Southeast Asia.

“If delays do occur, an average of three months would only reduce 2022 production (the peak year of impact) by 160,000 b/d, a mere scratch on the surface of global supply. But if control of the disease takes a turn for the worse, the impact multiplies quickly.”

Global supply networks “could be augmented with a resurgence in local manufacturing. But to offset the increased cost, investment in technology-led regionalization would need to accelerate.”

On Wednesday, a bipartisan agreement in Congress was reached that would provide more than $7 billion to combat the viral outbreak. The accord was expected to be passed by Congress as soon as the end of the week.