A prolific surge in Covid-19 cases in India is cutting into spot liquefied natural gas (LNG) demand as some vessels have avoided the country since last month. 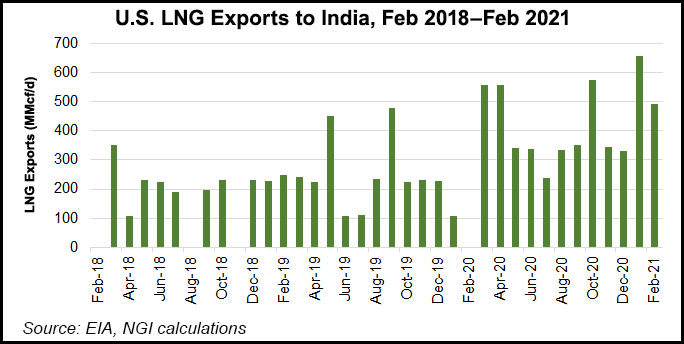 Seven LNG tankers that were headed to India have been diverted to other destinations since mid-April, said Kpler analyst Charles Costerousse, who added that the market research firm is monitoring for additional diversions. Three vessels destined for India also appeared to slow down on Thursday.

India has reported more than 300,000 new cases daily for more than two consecutive weeks. The country broke a global record on Friday, reporting 414,188 new cases of Covid-19. While energy demand has remained resilient, primarily due to the government’s resistance to another national lockdown, the crisis and rising commodity prices are likely to cut into natural gas growth this year. Wood Mackenzie expects India’s gas market to grow by roughly 5% year/year in 2021, lower than the 8.7% anticipated before the latest jump in coronavirus cases.

Jason Feer, global head of business intelligence at shipbroker Poten & Partners, said strong demand in Asia and Europe is providing ample opportunities to divert cargoes to buyers willing to pay high prices. But he added that India’s LNG receiving terminals are filling up as demand falls off, likely driving some of the diversions as well.

India imported 26.6 million tons of LNG last year, accounting for 7.5% of global market share,  and making it the world’s fourth-largest importer of the super-chilled fuel, according to the International Group of Liquefied Natural Gas Importers. The country has been an opportunistic buyer of spot LNG volumes, taking advantage of swings in prices to capitalize on cheap supplies when they become available.

Despite the bite the latest virus surge has taken out of spot buying in India, global gas prices have continued rising. Spot prices in North Asia neared $10.00/MMBtu on Friday as strong summer buying persists in the region and European demand increases competition for LNG cargoes. The forward curve shows similar prices through the fall. Maximum Brent-linked prices were also well above $11.00/MMBtu Friday as oil prices have continued slowly moving up in recent months, according to NGI data.

“With higher LNG prices, the crisis is having a far greater impact on India’s LNG importers despite lesser restrictions compared to 2020,” Singhal said.

While U.S. feed gas volumes continue running at record highs to meet LNG demand across Asia and Europe, the nation’s offtakers stand to lose out on the drop in incremental spot demand from India. The United States has emerged as the world’s leading spot supplier given the flexible contracts offered by its export terminals.

The country has at times flirted with providing about 20% of India’s imports depending on demand in any given month, according to Kpler. Qatar is India’s largest LNG supplier, but it can easily divert cargoes to other destinations such as Europe, where it has storage capacity.

According to NGI calculations, 10 U.S. cargoes had made their way to India through mid-April amid a surge in deliveries to nation’s across Asia this year as prices have increased.