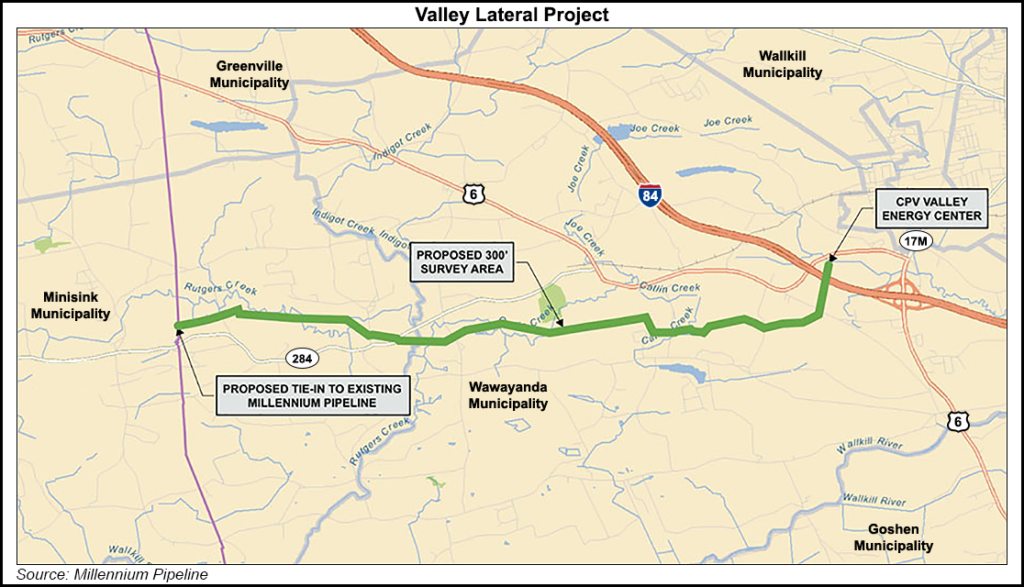 On Monday, a three-judge panel of the U.S. District Court for the Second Circuit in Manhattan denied a petition for review, filed last November, by the New York Department of Environmental Conservation (DEC) in the case New York State DEC v. FERC, No. 17-3770.

At issue are two orders issued last year by the Federal Energy Regulatory Commission in support of Millennium Pipeline Co. LLC, which is building the Valley Lateral.

FERC ruled last September that the DEC had waived its authority to issue a Section 401 water quality certification (WQC) for the project, which is required under the Clean Water Act (CWA), claiming state officials took too long to make a decision. Two months later, FERC issued an order denying requests by the DEC for a stay and a rehearing over its September decision.

“We conclude that the DEC waived its authority to review Millennium’s request for a water quality certification under the CWA by failing to act on that request within one year,” wrote Circuit Court Judge JosÃ© Cabranes. “We also conclude that FERC does have jurisdiction over the pipeline. Accordingly, we deny the petition for review.”

Millennium spokeswoman Michelle Hook told NGI’s Shale Daily that the company was encouraged by the decision, and construction would now be able to resume.

“We note that FERC imposed numerous environmental conditions, many of which DEC requested, and Millennium will strictly adhere to,” Hook said Monday. “We are eager to complete this important project in an environmentally friendly manner and bring clean, affordable energy to people throughout the region.”

Heather Briccetti, CEO of The Business Council of New York State Inc., added that the ruling “shows that the DEC cannot impede the transport of interstate natural gas by refusing to act on a request for a certification. We hope this decision will force the state to recognize that natural gas can and should be a vital part of New York’s energy mix going forward.”

The DEC had argued that under FERC’s interpretation of Section 401 of the CWA, a permit applicant could frustrate state regulators by first submitting a deficient or incomplete application, then waiting 364 days to address any shortcomings. The DEC had also disagreed with FERC’s assertion that state regulators could have simply denied Millennium’s permit application for being incomplete.

The court disagreed with both of the DEC’s arguments.

“These concerns are misplaced,” Cabranes wrote. “If a state deems an application incomplete, it can simply deny the application without prejudice — which would constitute ‘acting’ on the request under the language of Section 401. It could also request that the applicant withdraw and resubmit the application.

“Such a denial does not preclude a state from assisting applicants with revising their submissions. Nor does it harm the process of public notice and comment, which would simply begin once a state decided that it did not need to deny an application for incompleteness. And what the DEC calls ‘premature’ denials of applications are not likely to prompt a deluge of litigation.”

Millennium began building the 7.8-mile, 16-inch diameter Valley Lateral on Dec. 8, one day after the Second Circuit denied a motion by the DEC for a stay while the legal challenge with FERC played out [CP16-17]. The pipeline is designed to deliver about 130 MMcf/d from the Marcellus Shale to the Competitive Power Ventures’ 680 MW Valley Energy Center plant under construction in Wawayanda, NY.

It was unclear when the project would be complete or if the DEC would appeal. Millennium is jointly owned by affiliates of Columbia Pipeline Group, National Grid and DTE Energy.